The movie "Remember The Titans"

The movie Remember The Titans was a great example of character education. Throughout the movie there are many great examples that represent the acronym “PRIDE,” which stands for patience, responsibility, integrity, dedication, and empathy. The characters represent all of these qualities well in this great movie.

A character in Remember The Titans that represented the “P” in “PRIDE,” was Coach Herman Boone. He showed patience. Patience is a good-natured tolerance of delay. Coach Boone showed patience when he waited for the two races on his team to combine and to stop fighting.

Don't use plagiarized sources. Get your custom essay on
“ The movie “Remember The Titans” ”
Get custom paper
NEW! smart matching with writer

He knew they wouldn’t come together right away, and it did take time but he eventually got them to get along. Without his patience the team would be a mess, and they wouldn’t have won any games probably.

A character in Remember The Titans that represented the “R” in “PRIDE,” was Gerry Bertier. He showed responsibility. Responsibility is to be reliable or dependable to an obligation of yours.

Gerry was the captain of the Titans team before he became hurt and he stood up for Petey Jones, the running back. Even though Gerry wasn’t for having the African-American players on their team, he was responsible for being the captain and to help his teammates. When Petey was having a tough time as running back because the white players on the offensive line wouldn’t block for him because of his race, as a captain would do, Gerry scolded those players. That was a spark that led to them getting along as one big team.

A character in Remember The Titans that represented the “I” in “PRIDE,” was Coach Bill Yoast. He showed integrity. Integrity is doing what’s right even if it is not what you want. Coach Yoast showed integrity during one of the games when the referees didn’t like Coach Boone because of his race. The referees called penalties on almost every play against the Titans, even when they were clean plays. Coach Yoast did what was right and stood up for Coach Boone and threatened to rat out the referees if they didn’t call a fair game. This deed ended up losing himself his spot in the hall of fame, but in the end he did the right thing.

A character in Remember The Titans that represented the “D” in “PRIDE,” was Coach Boone. He showed dedication. Dedication is to stick with something without quitting, even if it may not be so easy. Coach Boone showed dedication by not quitting his job as the Titans head coach. Boone was constantly criticized about his skin color and the team he coached was a tough team to coach. there were fight that often occurred between his black and his white players that he had to deal with. In the beginning his teammates didn’t even like him, but he didn’t quit.

A character in Remember The Titans that represented the “E” in “PRIDE,” was Louie Lastik. He showed empathy. Empathy is understanding and fully comprehending another’s feelings. Louie showed this when he sat with his black teammates at lunch. This showed that he cared for them and wasn’t against them like his fellow white teammates. He didn’t care about race, he felt as if they were one big team like people should feel. He knew that his black teammates didn’t want to be made fun of, they just want to fit in with everyone else.

Remember The Titans is a movie that every person should see. It gives perfect examples of character education. The characters shoe patience, responsibility, integrity, dedication, and empathy. This movie was a great and fun way to learn about character education.

The movie "Remember The Titans". (2016, May 16). Retrieved from http://studymoose.com/the-movie-remember-the-titans-essay 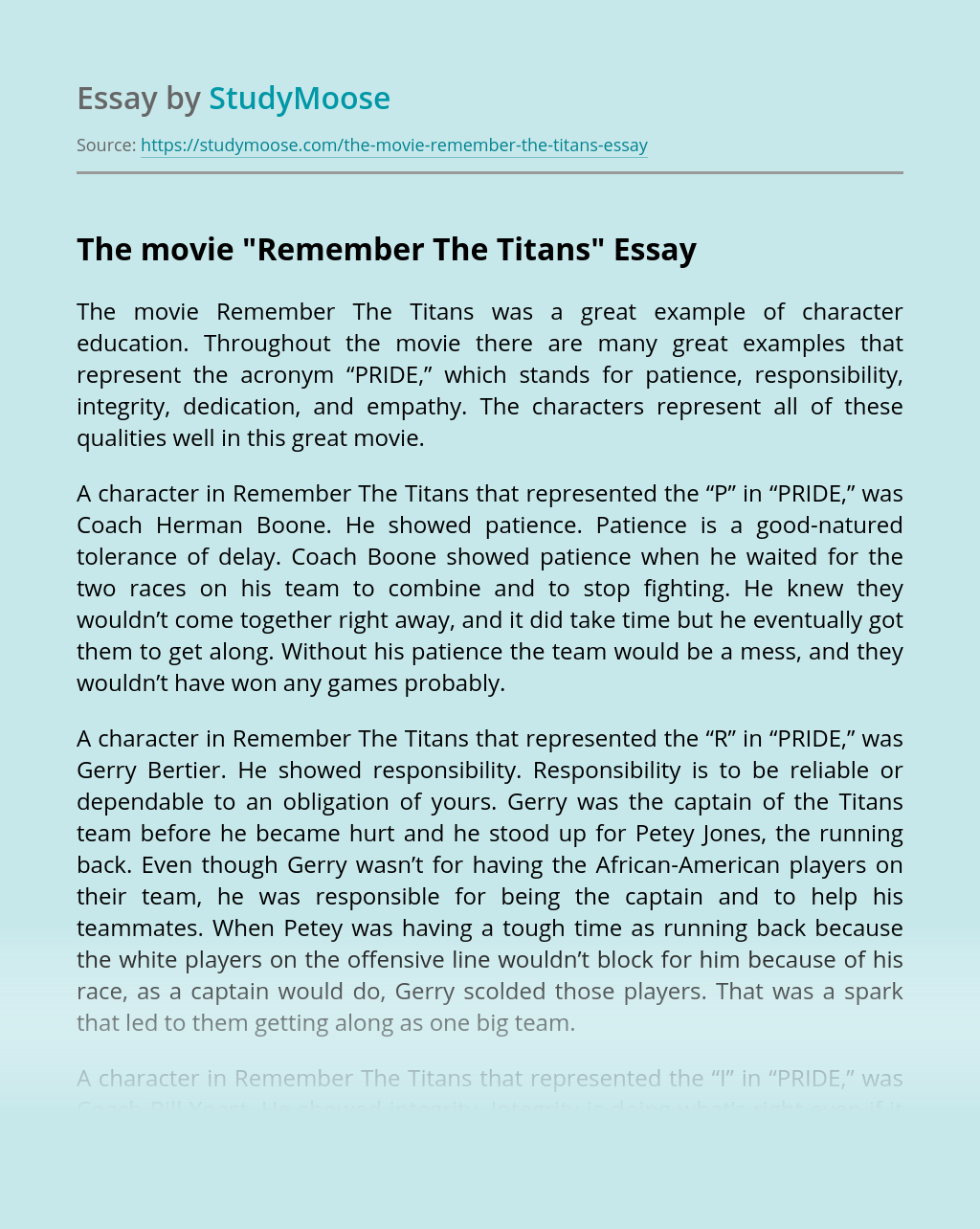