Purity of Good and Evil in Ender's Game

The basis of human nature and the way we interact with one another and ourselves throughout our lives is deeply connected with the idea of good and evil in the human speciescut? This reoccurring theme is seen in all religion, mythology, and modern day stories which all have the constant moral compass of straying from evil and relating to the good through actions and emotions.

While it is believed by many that people’s actions shape their internal identity, is that really the case? Ender’s game raises this question with Peter symbolizing evil and portrays ultimate actions of good and Ender symbolizing good while portraying the actions of evil.

Don't use plagiarized sources. Get your custom essay on
“ Purity of Good and Evil in Ender’s Game ”
Get custom paper
NEW! smart matching with writer

With the toying of the readers perception of the stereotypical good and evil, Card proves in his writing that emotions, especially remorse, is the factor in which separates good and evil and that the pure form of the two cannot be found in our species’ nature.

Throughout Ender’s Game, Ender has a constant internal battle between the wrong that he is forced to do and the good that he naturally contains.

Like his sister, he is inherently good, but because he is a genius and ultimately more that of an outcast, he is put in situations where his actions of killing are portrayed of that of Peter. Ender is shown going through three main cycles of violent behavior where he first is an outcast and is tormented by them, then faced with a life death situation, he has no choice but to fight full heartedly.

The cycles are Enders fight with Stilson, his fight with Bonso, and his ultimate battle with the Buggers. In each cycle, Ender is unaware that he may and ultimately does kill his opposite. The fact that he is not aware of his doings until the end of the book and is ultimately referred to as “The Xenocide” His tittle sp is that of what the reader early on saw as Peter’s fate, not Enders, showing Card’s switch on the roles and actions of the good and evil roles within the book.

Peter’s emotional development throughout the book does not change or get any less of that than evil, but Peter ultimately does good, showing the other half of Card’s skewing of the roles of pure good and evil. The character of Peter is introduced as a bully that has a main agenda of torturing Ender out of the jealousy that Ender has been chosen by command.

After Ender leaves for command school, Peter is shown as a standard sociopath, with the torturing and killing of innocent animals; an early sign that is commonly linked to crime and murder in the child of study’s later life. While the reader would have guessed that Peter would be the one responsible for a genocide instead of Ender, somehow Peter falls into becoming a Great ruler of the Land. Although that is the case, Card doesn’t let the characters actions fool the reader, for Peter is still more on the evil side due to the fact that his sole reason for coming to power is a selfish yearning for control and power.

Although both Peter and Ender fulfill their seemingly opposite destinies, they are very much different from one another, because they both remain true to their first intentions. Ender has taken on the role of Peter’s foretold destiny, Card does not show Ender as that of a mass murderer for he did not commit Genocide with no remorse to follow. He was unaware of the Genocide at the time he was committing it, for if he did, he would not have been able to go through with it. “

Of course we tricked you into it. That’s the whole point..It had to be a trick or you couldn’t have done it… We had to have a commander with so much empathy that he would think like the buggers, understand them and anticipate them. So much compassion that he could win the love of his underlings and work with them like a perfect machine, as perfect as the buggers. But somebody with that much compassion cold never be the killer we needed. Could never go into battle willing to win at all costs. If you know, you couldn’t do it. If you were the kind of person who would do it, even if you knew, you could never have understood the buggers well enough”(p.298), a quote said by Graff when explaining to Ender why they tricked him into defeating the Buggers in war.

Ender shows compassion and love for his enemies and never fails to feel remorse after the confrontations. Through his cycles mentioned earlier, he never knew he killed anybody until after they were all completed, for if he knew, he would have never been able to fight again and would have been haunted by the fact that he had become as Brutal as Peter. “In the moment when I truly understand my enemy, understand him well enough to defeat him, then in that very moment I also love him. I think it’s impossible to really understand somebody, what they want, what they believe, and not love them the way they love themselves.” (p. 238)

Ender reveals this to Valentine during their visit on land. Card shows that while Peter gets joy out of hurting and may have no real understanding of love, Ender is tortured by the doings unto his enemy for he falls in love with his enemies nature and finds them fascinating. The fact that Ender at the end of the novel goes back and fixes his wrong by repopulating the buggers is another example of his compassion. If there is any thought in the readers mind that Ender is in any way truly violent deep within, they are altered due to this action of reaching out to save the buggers.

Card uses Valentine and the adults in the book as a standard to base Peter and Ender off of. Valentine is representative of the majority of human race, the majority that is between good and evil. While the human race is predominantly good, they can easily be swayed into doing things, often feeling remorse, just as Valentine feels when she is helping Peter.

While visiting Ender on his leave, Valentine describes her self. “Two Faces of the same coin. And am I the metal in between.” (p. 236) She holds the two opposites together by being their common ground. The adults in the novel, while mainly absent from both Peter and Ender’s lives, are neither good nor evil for they are complex beings. Card’s use of Children is present because they are simplistic in their good and evil with not much to get in the way and disguise their true agenda.

Cards separation between Ender and Peter’s actions from their true intentions shows that he believes that human intentions cannot be that of a pure form of simply the two ends of good and evil. They are skewed throughout lives with factors leading and morphing an individuals take on their internal emotion and what they do with it.

While Ender and Peter were close to being the polar ends to our society’s obsession with good and evil, they prove that even the blank primal slate of children is molded. It proves that superheroes are truly immortal because it is impossible for a human to be that of a perfect being, doing no evil what so ever, and that humans are prone to making mistakes. Its how an individual deals with a mistake separates the good from bad.

Purity of Good and Evil in Ender's Game. (2016, Nov 12). Retrieved from http://studymoose.com/purity-of-good-and-evil-in-enders-game-essay 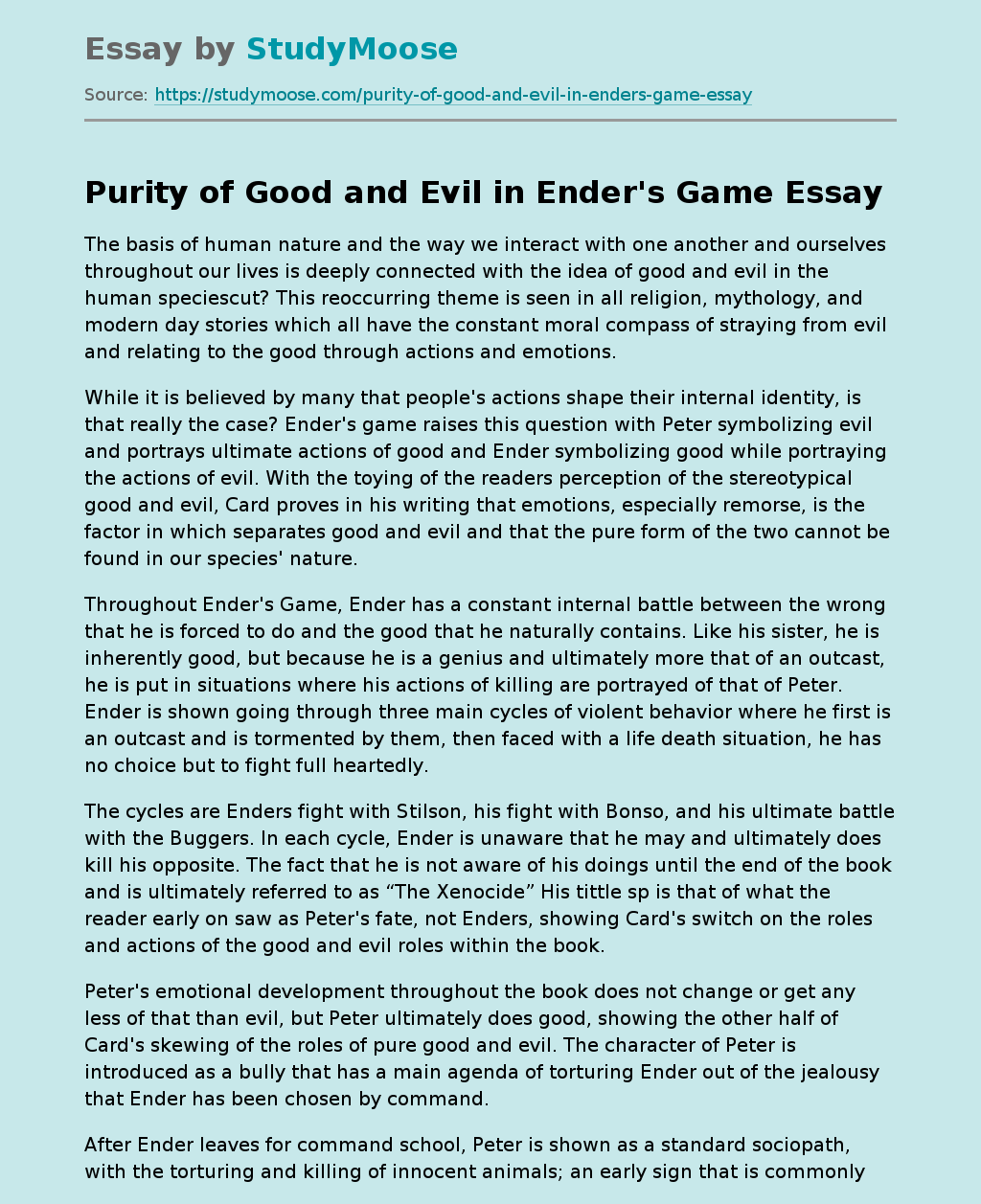