Growing up, it never was as apparent that the families and friends that you associated with shared different beliefs, were from different cultures, and were just different from you and from your family. Children do not tend to recognize such differences, but as growing adults it becomes ever apparent that being “different” and accepting these differences is just a part of life. Perhaps kids just do it without thinking about it? Heritage assessments promote understanding of another’s beliefs, traditions, health practices, as well as helping to better understand one’s own heritage.

Don't use plagiarized sources. Get your custom essay on
“ Heritage Assessment Assignment ”
Get custom paper
NEW! smart matching with writer

This paper will address and identify the common health traditions based on cultural heritage of three culturally different families by using the heritage assessment tool. Nice intro!

Heritage assessments are very important tools in regards to evaluation of a person as a whole and targeting aspects of a person that may not be as evident or understood if not properly assessed. Attempting to assess and learn about one’s heritage is useful in determining one’s core beliefs and understanding the significance of how their heritage and culture plays a part of whom they are and what they believe.

Identifying one’s heritage can assist in understanding their current cultural practices and why they may practice certain beliefs. The culture in which we are raised or in which we work greatly influences our beliefs, values, and behaviors. Assessing our individual cultural heritage is the first and most important step to identifying what may cultivate or block our communication with and care of a person from another culture (Wintz, 2009).

The heritage assessment was an important tool in providing a deeper understanding of the families that were interviewed. These families appeared to be from different cultures while also having different backgrounds and beliefs. While it was apparent that these families might have some similarities, it was expected that more differences would be discovered. Comparisons of common health practices such as health maintenance, health protection and health restoration would be assessed. These health practices assessed would be evaluated in a more complete technique, as these health practices would be assessed in the physical, mental and spiritual sense.

The three families that were interviewed were the Smith family, the Scott family and the Martinez family. Health maintenance is basically the traditional beliefs and practices, such as daily health-related activities, diet, exercise, rest used to maintain health (CULTURALCARE Guide, n.d.). The three families that were assessed provided different insight to their views of health maintenance. The Smith and the Scott family viewed health maintenance in a more similar manner due to their religious beliefs being similar, as they both identified themselves as being a part of the Church of Jesus Christ of Latter-day Saints (LDS). However, even though the Smith and Scott family shared similar religious beliefs, there were apparent differences in their health maintenance routines. The Smith family comes from a mixed background of Hispanic and German heritage. They are very conscientious of their physical health in regards to diet and nutrition, as they make intense efforts to exercise multiple times a week and cook highly nutritious meals. They closely follow their church’s counsel on choosing healthy foods, avoiding alcohol, tobacco and other harmful substances to the body and going to bed and arising early.

On the other hand, the Scott family whose heritage is dominantly English/Caucasian does not fully observe the importance of exercise, proper nutrition and proper sleeping habits in their daily routines. They do not show a strong emphasis on exercising and often eat fast food and make unhealthy nutritional choices and tend to stay up late and sleep more than is needful, which slightly goes contrary to their church’s beliefs. However, the Scott family does choose to avoid tobacco, alcohol and other harmful substances to the body like the Smith family. The Smith and the Scott family closely identified their religious practices in the LDS church as an important staple of health maintenance, in the spiritual aspect, as both families are active in their church and attend their meetings at least once a week. While the Martinez family considers themselves somewhat religious with their Catholic beliefs, they didn’t correlate their religious beliefs with their health maintenance practices. The Martinez family does not often promote exercise in their family or healthy nutritional habits. However, in opposition of the Scott family, the Martinez family rarely eats fast food and often prepares homemade meals. But, the Martinez family has Mexican heritage and cooking with lard and fats are a big staple in Mexican food cooking and did not consider their cooking as healthy. They considered themselves to be social drinkers and habitual tobacco users, as they were raised with these substances in their households. The aspect of health protection was more important in the Smith and Scott’s family’s health practices but was not as duly noted in the health practices observed in the Martinez family. Health protection is defined as important activities of public health that eliminate possible risk of adverse consequences to health attributable to environmental hazards (Public Health, n.d.).

The Smith and Scott family closely related that by avoiding the usage of tobacco and alcohol as well as other harmful substances (drugs, etc.) this would aid in protecting their health. However, the Smith family also attributed frequent prayer and church attendance as means of protecting their health, while the Scott family did not show such correlation during the interview. The Scott’s mainly focused on the physical side of health protection, rather than the spiritual side. The Martinez Family viewed health protection in slightly different ways than the other families. They often wore crosses around their necks because they believed this offered protection to them, as the cross symbolizes Jesus Christ’s dying for mankind on the cross. They believe that Jesus Christ will protect them in their health if they have faith. They do not believe in the nutritional aspects of health protection as much as the spiritual aspects. They do believe that by observing the practice of “Lent” once a year that this will aid in health protection. Therefore, the Smith and Martinez closely related health protection with their religious practices. Health restoration is defined as traditional beliefs and practices concerning the activities, such as folk remedies, modern medicine and healers, that must be used to restore health (CULTURALCARE Guide, n.d.). In regards to health restoration, the Smith family was the only family that preferred to use a trained medical doctor in the healing of their ailments, as they have great health insurance and believe strongly in the healthcare system. The Scott family focused mainly on natural remedies for healing in regards to health restoration, as these practices have been passed down from generation to generation. The Scott family does not have health insurance. The Martinez also does not have health insurance. The Martinez family primarily focuses on the body’s own strength in healing itself and does not readily accept modern medicines used in today’s healthcare system. The Martinez family was the only family open to the use of an exorcist when healing is not achieved, as they believed that demons could consume the body to make one sick or afflicted. The three families views of health restoration showed more differences than similarities.

The traditions observed were closely related to the Martinez Family’s Mexican heritage, as they identified themselves closely with the Mexican culture and traditions. The Martinez family supports many of their culture’s traditions as it relates to their Mexican heritage. They viewed the holiday of “Dia de los Muertos” as one of their most cherished holidays, as the holiday focuses on the assembly of family and friends to pray for and remember friends and family members who have died. The Martinez family had great respect and appreciation for their ancestors and for their Mexican heritage. However, the Smith and Scott family’s cultural beliefs were more so influenced by their religious beliefs, rather than by their diverse heritage backgrounds. The Smith and Scott Family chose Christmas and Easter as more cherished observed traditions, as the LDS church focuses on the importance of these holidays. It was apparent that the Smith family showed more interest in their religious backgrounds and history of their religion, rather than their actual heritage. The Smith family was also a relatively “new” addition to the LDS church as their ancestors were not of the LDS faith; rather they were of the Catholic faith. However, the Scott family had ancestors that were a part of the LDS church ever since the church was first organized in 1830. However, despite the history of membership that the Scott family had, the Smith family proved to be more devout to the LDS church in every aspect of the church’s beliefs. The identification of the health traditions and practices that were observed by these families aided in my own personal cultural heritage understanding, as I could relate to each family in at least a few ways. My respect for various cultures grew and I was also more inclined to accept and have deeper respect for my own heritage and culture. I enjoyed reading your analysis of the three families you interviewed. 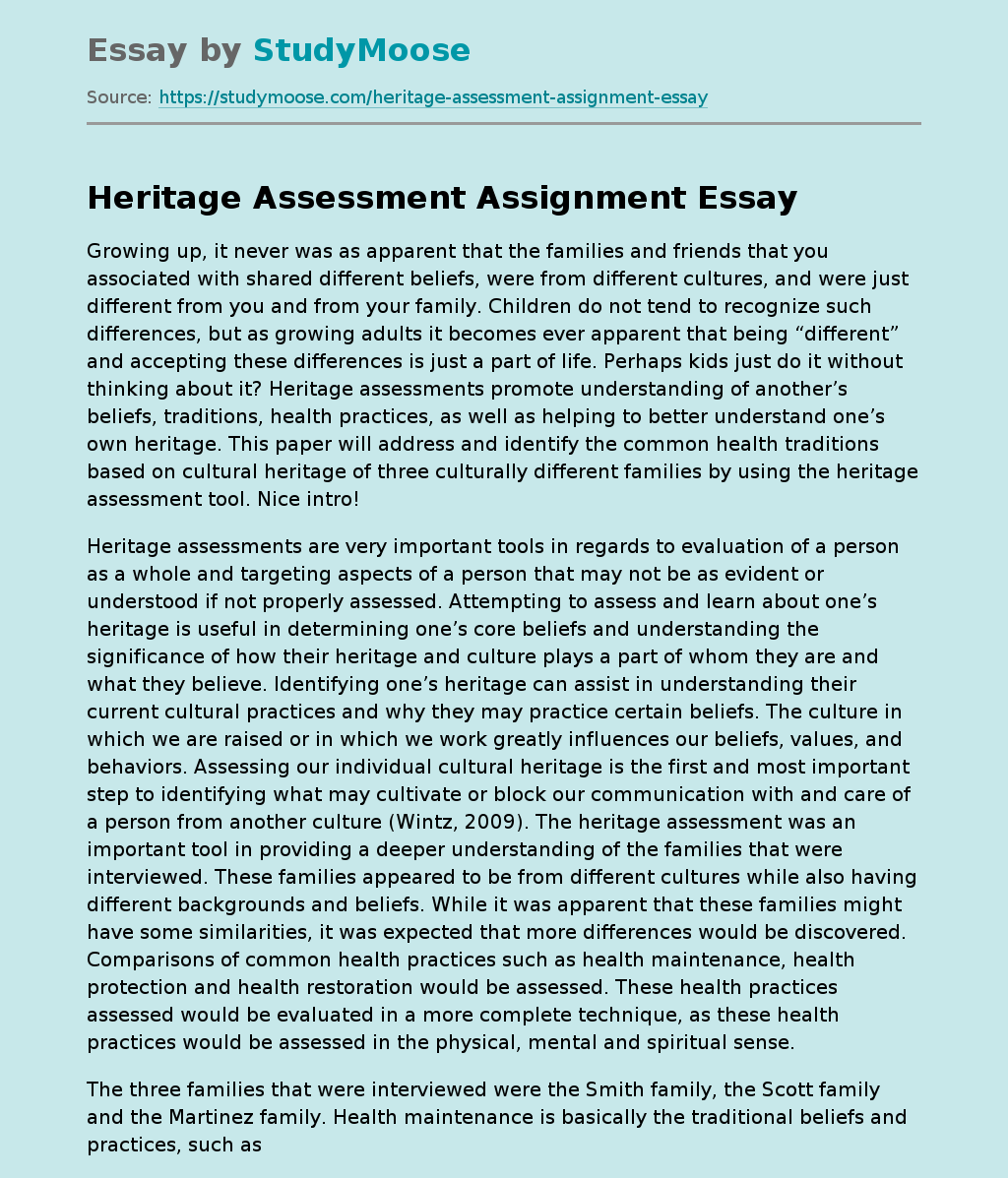