“Woman must write herself: must write about women and bring women to writing…Woman must put herself into the text-as into the world and into history-by her own movement. ” (Cixous) So says Helene Cixous in her seminal essay “The Laugh of the Medusa. ” This is, essentially, the basis of Helene Cixous’s notion of “Ecriture Feminine.

” The basis behind this notion of Ecriture Feminine stems from the fact that, at the particular point in time in which Helene Cixous was composing this text (and, to an extent, this holds true in present times) the field of authorship was, predominantly, dominated by, as are the majority of things in our society, by males.

Don't use plagiarized sources. Get your custom essay on
“ Helene Cixous’s notion of Écriture Féminine ”
Get custom paper
NEW! smart matching with writer

Cixous referred to this as “phallogocentric writing. ” (Cixous) Simply put, male writing is just that, masculine writing. Male writers view their surroundings in a very stereotypical masculine fashion. Only one point of view has been viewed, and this greatly infuriates Cixous.

Helene Cixous postulates in the text that Ecriture Feminine will be a method that the woman author will utilize to “realize the decensored relation of woman to her sexuality, to her womanly being, giving her access to her native strength; it will give her back her goods, her pleasures, her organs, her immense bodily territories which have been kept under seal; it will tear her away from the superegoized structure in which she has always occupied the place reserved for the guilty (guilty of everything, guilty at every turn: for having desires, for not having any; for being frigid, for being “too hot”;

For not being both at once; for being too motherly and not enough; for having children and for not having any; for nursing and for not nursing…)…A woman without a body, dumb, blind, can’t possibly be a good fighter.

She is reduced to being the servant of the militant male, his shadow. We must kill the false woman who is preventing the live one from breathing. Inscribe the breath of the whole woman. ” (Cixous).

Presently, exactly thirty-five years after the initial publication of Helene Cixous’s “The Laugh of the Medusa,” there are numerous woman writers on a global scale. Helene Cixous honestly did make some rather good points with the concept of Ecriture Feminine.

The woman author must challenge the male dominated field of authorship (a form of patriarchy) and find her own identity as an author, thus allowing her perspective of things to be both seen and heard. One thing that slightly irritates me about Cixous’s text is that she continuously refers to women authors as just that, “women authors. ”

My issue with this is that, granted, the perspectives of authors of both sexes do differ greatly. Yet at the same time, why does a woman author have to be a woman author rather than as an author who just happens to be a woman? An example of Ecriture Feminine (albeit not a particularly great example) is Stephanie Meyer and her series of Twilight novels.

Meyer is an author who just happens to be a woman, writing in present times, much like Helene Cixous was desirous of. Yet, at the same time, Meyer essentially defies all that Cixous stood for as far as her writing is concerned. For instance, the protagonist of Meyer’s Twilight series, Bella Swan, granted is a central female character to the entire series, yet she is written so one-dimensionally, is fickle, completely submissive, and is simply defined by the various male figures in her life.

Stephanie Meyer essentially owes her career to Helene Cixous as well as various other Feminist writers during that particular point in time, yet she totally dismisses all of the aspects concerning Ecriture Feminine. 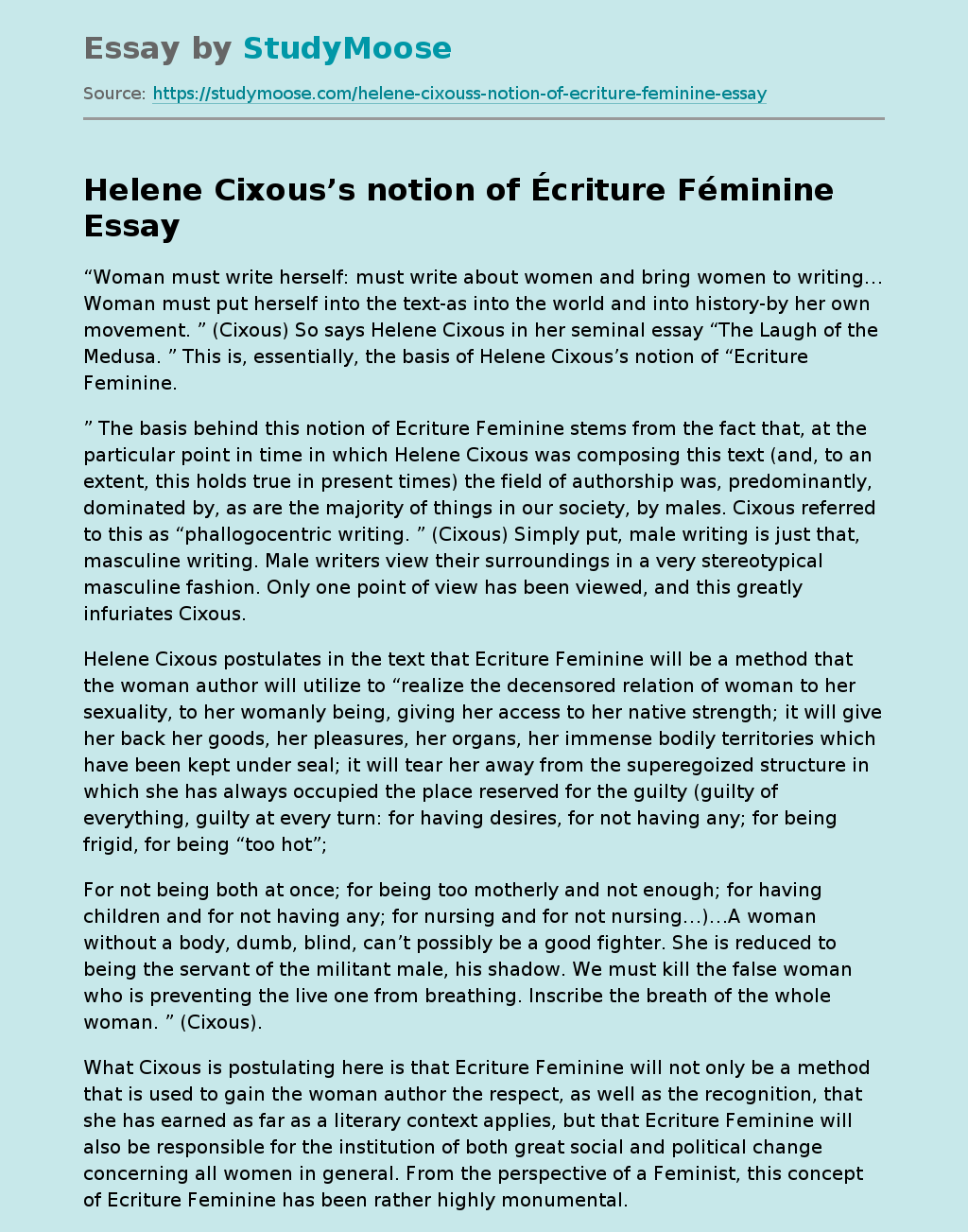