We are surrounded by gender lore from the time we are very small. It is ever-present in conversation, humor, and conflict, and it is called upon to explain everything from driving styles to food preferences. Gender is embedded so thoroughly in our institutions, our actions, our beliefs, and our desires, that it appears to us to be completely natural. The world swarms with ideas about gender – and these ideas are so commonplace that we take it for granted that they are true, accepting common adage as scientific fact.

Don't use plagiarized sources. Get your custom essay on
“ Gende: Feminine and Masculine ”
Get custom paper
NEW! smart matching with writer

Gender seems natural, and beliefs about gender seem to be obvious truths, that we need to step back and examine gender from a new perspective. Doing this requires that we suspend what we are used to and what feels comfortable, and question some of our most fundamental beliefs. This is not easy, for gender is so central to our understanding of ourselves and of the world that it is difficult to pull back and examine it from new perspectives.

But it is precisely the fact that gender seems self-evident that makes the study of gender interesting.( Eckert and McConnell-Ginet, 2003)

One major aspect that gives us out in our daily interactions is gender. It defines our identity and its effect is greatly felt the very moment we are brought to this earth. The social, religious, political and economic meanings are inculcated at every stage in our life (Castaneda & Burns-Glover, 2004) and we are mostly made to believe and behave in a way others encourage us and do away with certain beliefs and behaviors others discourage us because of gender.

It could be considered that, the “natural” abilities of men and women form the bases for gender expectations. That is in most cases, the occupations deem fit for each gender, differences in temperament and personality, attitudes appropriate for each gender and towards each gender provides the bases for gender expectations. There is a theoretical position held by many researchers that women’s subordination to men is universal, based on women’s universal role as mothers and homemakers (Rosaldo & Lamphere, 1974).

Gender is a set of roles which, like costumes or masks in the theatre, communicate to other people that we are feminine or masculine (Cleves, 1993). The author further notes that this set of particular behaviors encompasses all aspects of our lives, such as appearance, personality, sexuality, family commitments and work, altogether form our gender roles. Differences in gender roles and behaviours often create inequalities whereby one gender becomes empowered to the disadvantage of the other (World Health Organization, WHO, 2009). As noted by Kimmel (2000), power, and inequality between females and males. Gender inequality according to Schalkwyk, (2000) is a social construct that is transmitted through culture, and has perpetuated over time. The World Bank Policy Research Report (2001) suggests that societal institutions like social norms, customs and laws as well as economic institutions shape roles and relationships between men and women and influence what resources women and men have access to and in what forms they can participate in the economy and in the broader society.

“Traditional” gender expectation, which accepts a biased gender view based on male-breadwinner households, has been on a decline over time: this due to economic development, the decline of religion and the increasing participation of women in political and social spheres (Inglehart and Baker 2000). However, they are still prevalent in many societies. Worryingly, one of the main concerns behind gender expectation is its effects on women. Such views have been found to play a negative role in women’s educational and labour market opportunities (Davis and Greenstein 2009; Khoudja and Fleischmann 2015; Khoudja and Platt 2016).

Societal understanding of gender and its expectations are unwelcome and prevalent in many aspects of our social setting. Gender expectations results in disparity between males and females in attainment and attitudes specifically in the social, political, intellectual, cultural, and economic realms. The gender divide that is present in Sub-Saharan Africa is almost universally detrimental to the status and rights of women, resulting in their marginalized and subordinate position in society in comparison to their male counterparts (Toni, 2014).

It is against this background that the study seeks to examine the factors that influence gender expectation among final year students of the faculty of social science at knust.

SIGNIFICANCE OF THE RESEARCH STUDY

Findings from the study will reveal other areas which have been given little or no attention for future research studies.

Findings of the study will shape societal expectations on gender related issue and how it affects social facets on knust campus.

Also, information from the study will guide policy makers in their formulation of gender related policies. Authorities in the institution and Non-government organizations which are challenged with the responsibility of gender issues will be well informed to come out with policies and programmes that will be in the interest of the student community

The scope identifies the boundaries of the study in term of subjects, objectives, area and the issues to which the research is focused.

Kwame Nkrumah University of Science and Technology campus was considered for the study. Final year students would be specifically considered.

Gender studies are broad but this particular study will be limited to the religious, socioeconomic and cultural influences on gender expectations.

Gender- Refers to either of the two sexes, especially when considered with reference to social and cultural differences rather than biological ones.

Expectations – A strong belief that something will happen or be the case.

CHALLENGES OR LIMITATIONS OF THE STUDY

Issues of gender are sensitive in our societal and we envisage that, respondents would not be willing to provide certain information. This we fear may affect the quality of work. With researchers engaged in other academic activities, time constraint would also be another challenging aspect of the study. Research in any form requires some funding to undertake. Research team inability to solicit external funding due to the academic nature of the work would be a challenge to the work.

ORGANIZATION OF THE STUDY

The study is structured into five chapters. Chapter one is the introduction to the study and deals with the background of the study, problem statement, significance, research objectives, research questions, scope of the study, definition of terms and limitations or challengers of the study.

Chapter two is the review of existing literature. It presents among others the historical review of gender, gender issues in Ghana, the theoretical and conceptual framework of the study, gender and culture, gender and religion as well as gender and socioeconomic status

Chapter three deals with the methodology of the study. This includes the research design, target population and sample size, source of data, sampling techniques, unit of analysis, measurement, methods of data collection and analysis as well as ethical consideration.

Chapter four presents the analysis of results and interpretation. Chapter five finally presents the summary of findings, conclusion and recommendations. 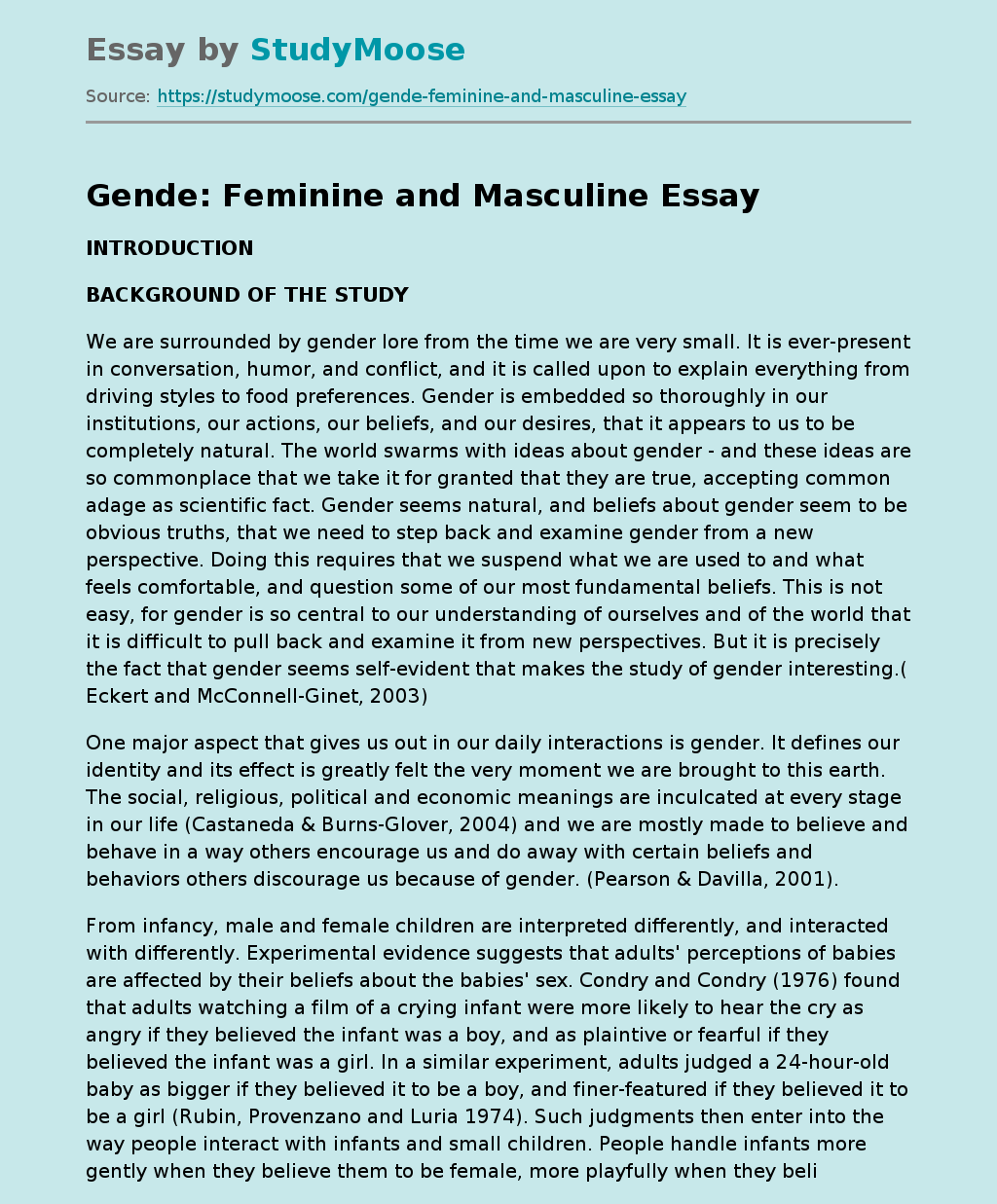