Duffy's Talent in the Feminine Gospels

Duffy’s talent in the Feminine Gospels is to show us clearly what women want most.”

Duffy’s talent in feminine gospels can be to show us clearly what women want most through their obsession particularly in the poem ‘The woman who shopped’. Although women in power are meant to be the most superior they are constantly trapped in the shadows of men which is represented in the poem ‘The Long Queen’. Women may also be seen to feel shameful of their appearance as Duffy portrays in the poem ‘Tall’ where a woman feels embarrassed for being different to societies expectations of women’s wants and desires in terms of their appearance.

Don't use plagiarized sources. Get your custom essay on
“ Duffy’s Talent in the Feminine Gospels ”
Get custom paper
NEW! smart matching with writer

The Long Queen’ is the first poem in the collection, and immediately captures the attention of the reader with its opening line ‘The long queen couldn’t die.’ This opening line is a statement showing that women want to be known by being ‘ eternal’. However, the use of the word couldn’t implies the question in the readers mind of whether the long queen wants to die and cant, or whether she is immortal.

This is essentially the difference between being a regular human, or having an element of fantasy and being a myth. The first stanza then progresses to make references to royal gestures, and explains that the long Queen has had many offers of a male partner, however has declined them all, making reference to Queen Elizabeth who never married when she ruled as queen. The stanza concludes with the idea that ‘the long queen to

Time for a husband’ the word ‘Time’ has a capital letter at the front, meaning that it has almost been personified having been written like a name, suggesting that the long queen ‘married’ time, that time was her partner.

‘Long live the Queen’, connotes the idea in the readers head that the Queen is powerful, and wil rule for a long time, which some may believe is Duffy’s purpose to signify what women want most.

The poem ‘The Woman Who Shopped’ by Carol Ann Duffy is a poem that although focuses on the events concerning a woman, acts as a portrayal for women in society as a whole, highlighting to readers what women in general want most. The poem is effective in depicting women in a negative way and by doing so Duffy creates a very straightforward poem that addresses her addiction precisely. The poem is a reflection of society so by keeping the identity of the woman unknown, she is able to grasp a wider audience. However, it emphasizes the widely thought notion in society at the time that women are inferior to men and don’t deserve a status. The poem is filled with various sexual allusions, imagery & is structured effectively in order to present the danger of addiction and its consequences in ‘The Woman Who Shopped’.

The danger of addiction is a main theme in the poem. The first stanza says, “Bought an apple” and the apple is a symbol of temptation, and has religious undertones as Eve was tempted to take an apple from the tree of knowledge, and the woman in this poem is tempted by the power she has. Duffy is also clever by her use of enjambment whereby she uses the title to begin the first stanza by saying “The Woman Who Shopped went out with a silver shilling”, this sets a very fast pace, which reflects the speed at which the woman becomes addicted to spending money frivolously. Duffy cleverly hints that women are in control of themselves and are at fault for becoming addicted by what they want most. The pace of the poem further emphasises this. Another thing that emphasises this is the lack of punctuation, such as “curtains and mirrors and rugs” which show how quickly her addiction has taken over her and forced her to spend money relentlessly.

The poem Tall written represents how people in the woman’s society seem to think she has ‘super strength’ but she hasn’t, she’s just an extra tall woman. The poem in which describes the women and her desire to ‘fit in’ is crushed by her height, people find her abnormal because of her height which makes her flee from her town and try to hide her embarrassment by living in turret’s, which she chooses in which to try and disguise her height. Duffy portrays the universal idea of what it is meant to be a woman which the women in this poem defies therefore she hides away from her embarrassment as this is what she wants most. The structure to ‘Tall’ is a very childlike structure in which represents her non-stop growth. The selection of words at the beginning or at the end of certain stanzas in the poem defines this.

For example; ‘Daily, day one, further, day two and day three’. All of these words symbolise her growth within the poem and how significant her growth is, it signifies how much she grows each day. Duffy highlights the historical identity in which women should follow and what they are expected to want to be like. Duffy reverses the typical sex roles in which men and women should follow, ‘Somebody whooped. She stooped, hands on both knees, and stared at his scared face, the red heart tattooed on his small chest. He turned and fled like a boy.’ In this stanza it has a clear indication in which the stereotypical characteristics of both sex have swapped because men are meant to have the masculine characteristics, the strength, the dominance, and the power other others or typically women. Whereas in the poem it’s the men who are scared and dominated by the lady who is extra tall, which is shown when Duffy says ‘He turned and fled like a boy’ this is said within the poem because it shows the hierarchy in which the tall women has over people and specially over the opposite sex which is very uncommon, Duffy therefore represents most women as wanting to gain power.

In conclusion, Duffy highlights in the poems that women struggle to find their identity and try to conform to society to find an identity that doesn’t necessarily belong to them. Therefore, Duffy highlights that what women want most is to be apart of society and not to be excluded and that is why they feel the need to resort to addictions and other ways to conform to societies expectations of who they should be. However, some may argue that not all women may want to resort to societal expectations of them but break social barriers and achieve what they want most.

Duffy's Talent in the Feminine Gospels. (2019, Dec 14). Retrieved from https://studymoose.com/duffys-talent-in-the-feminine-gospels-essay 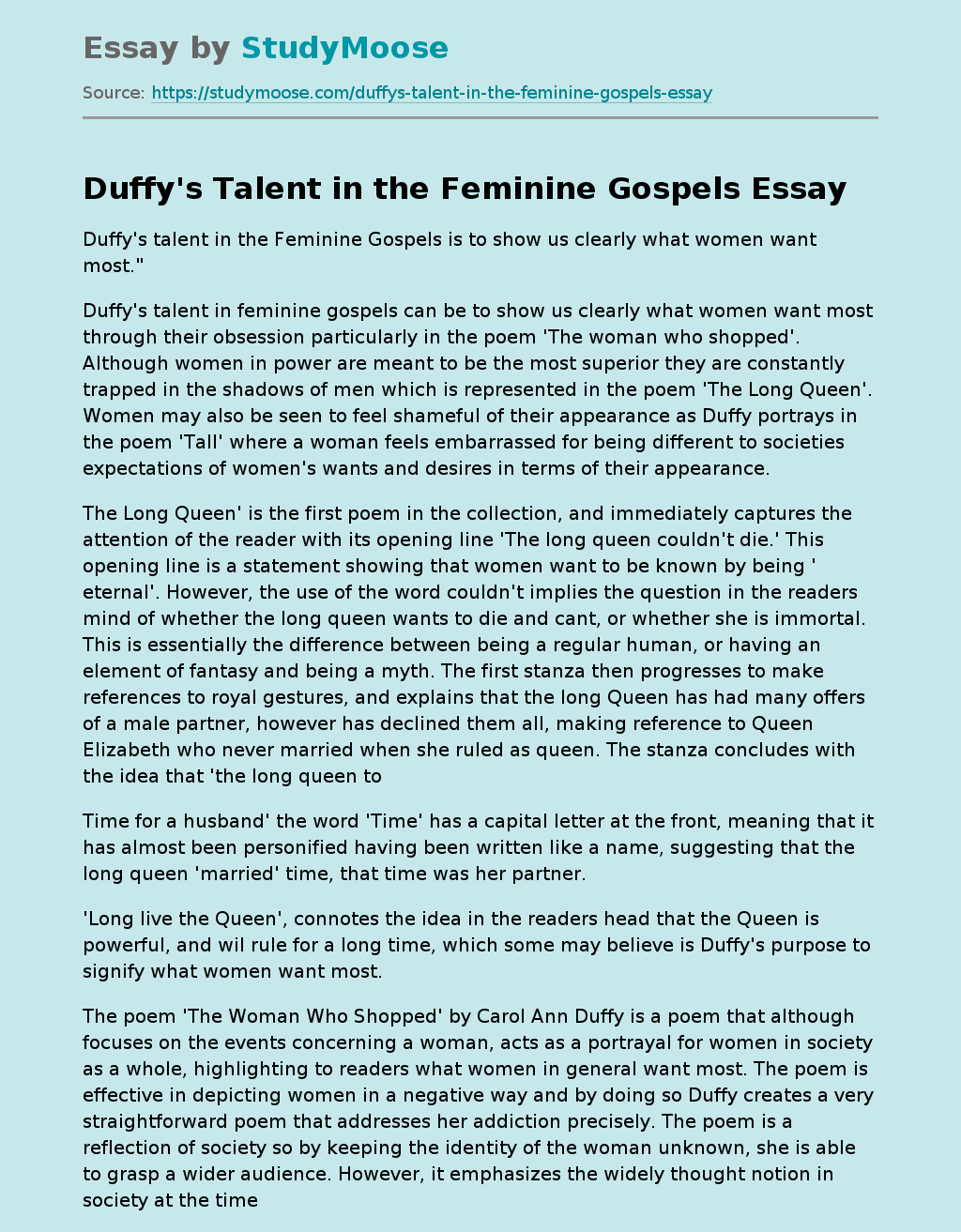