Jonathan Harker, a lawyer who lives in England, travelled all the way to Transylvania to execute a real estate purchasing with a rather strange man named Dracula who was a vampire. Harker arrives at the mystical castle upon living there for a couple of days realises he has been imprisoned. Jonathan was attacked by 3 innocent looking and attractive vampire who threatened to drink his blood before Dracula threatened them and left him.

Silence. Mina Murray and Lucy Westenra are the main female characters, including the 3 overly sexualised vampires.

Don't use plagiarized sources. Get your custom essay on
“ Dracula: Plot Overview ”
Get custom paper
NEW! smart matching with writer

Lucy was proposed to by three men who were introduced mid-way through the text. Quincey Morris, Dr John Seward and Arthur Holm wood. Mina and Lucy are close friends and share similar qualities. Lucy accepted Arthur Holm Wood ‘s invitation to a marriage but then the whole text experiences a plot twist. Lucy becomes severely sick and it was later discovered that she was bitten by something. That something was Dracula.

In the following paragraphs, I am going to write about some of the issues in the way women are portrayed, whether they are good or evil ways in which women have an impact on the text as a whole.

Stoker presents Mina Harker as a perfect Victorian feminine ideal through the duration in which the text was written. These qualities are shown in Dracula when it says” I must stop, for Jonathan is waking  I must attend to my husband!” (Chapter 9). Mina here depicts how she is able to maintain such a man and his well-being as well as herself.

These traits were pretty common during the Victorian era but Mina is one of the best ones depicted throughout the whole of the novel. This overall presents the good in women because if women are nice to men and men are nice to women then everybody would get along with each other unless there is some sort of confrontation about a certain topic. An example where Mina Harker shows betrayal (not necessarily evil) is “I believe we should have shocked the “new woman “with our appetites.” (Chapter 8).

This shows that the women in the novel do not feel disapproved even after the enormous feast that they had, which defied the Victorian feminine ideal which she manifested towards the beginning of the diaries. An addition to her being sexually pure, or chaste, she isn ‘t sexualised by Stoker which was the main idea as Stocker wanted to preserve Mina ‘s chastity. This also adds to the fact that see is the perfect example of a woman who follows the feminine ideals.

Dracula ‘s “3 weird sisters” are presented as supernatural yet very unsettling to gaze or look at. The two ideas juxtapose each other as if something is supernatural, then it would be interesting to understand what it is but the fact that after looking at the female vampires, you feel disgusted and unsatisfied with the fact that you have seen something that nobody else has seen nor experienced. The “3 weird sisters”, are meant to represent the evil throughout the novel.

This is evil is depicted when it says” There was a deliberate voluptuousness which was both thrilling and repulsive and she arched her neck she actually licked her lips like an animal, till I could in the moon light the moisture shining on the scarlet lips and on the red tongue as it lapped the white sharp teeth.” Harker is presented more like a feminine character as supposed to a male character and male characteristics in this quote.

The roles of both genders has been switched because instead of the man seducing and sexually assaulting, which is normally the case, the woman is the one seducing and luring men to her. This shows the evil and the sexual impurity in the extract due to the extreme saturation of sex implemented into the description of the female vampires. Men also had and still have certain idealisms but are obviously not so prominent as the female ideals.

These include: being the leader, being the strongest in the family, hiding your emotions otherwise you are judged. In this case if Jonathan was brave enough then he would be able to tell them to stop himself rather than waiting for Count Dracula to come. Dracula ‘s supernatural strength also shows that he is more of a man than Jonathan.

Dracula ‘s sisters are conveyed to be sinful and deifying creatures that ruin the chastity of the novel. This is shown when it says” At least God ‘s mercy is better than that of these monsters, and that precipice is steep and high. At its foot man may sleep  as a man.” (Chapter 4). This quote compares the good (God) and the evil (Vampires) which is a metaphor that Jonathan says after giving up from escaping after being imprisoned.

Also the word “man”, indicates that once he has been victimised by these monsters, he becomes less of a man but rather a woman because women are normally meant to be protected by men but in this case the woman threatens the man and then he becomes terrified. Another example where the good and evil are being conflicted through women is” I am alone in the castle with those awful women. Faugh! Mina is a woman, and there is nought in common.

They are devils of the pit!” (Chapter 4). Jonathan Harker directly compares the good woman with the evil female vampires who tries to seduce and kill Jonathan. He has no hope but to think that they ‘re not women purely because he has gotten used to being with a lovely and caring wife. If Jonathan was confident and not timid then he would be the one that would be making the most drama throughout the novel.

Lucy Westenra is presented as an innocent 19-year-old girl who has transformed to a sexualised monster. This is portrayed when it says “In a sort of sleep-walking, vague, unconscious way she opened her eyes, which were now dull and hard at once, and said in a soft, voluptuous voice, such as I had never heard from her lips: – “Arthur! Oh, my love, I am so glad you have come! Kiss me!” (Chapter 12).

After her marriage and after here collapsing into a trance, she begins to act suspicious and unlike her innocent self in the 19th century. This makes her sound like she is about to bite or contaminate others around her like the vampire bite is a contagious disease. Another example in which Lucy is a seductive princess is when it says “Come to me Arthur. Leave these others and come to me. My arms are hanging for you. Come and we can rest together. Come my husband, come!” (Chapter 16).

Men are always meant to comfort other people whether this is a brother, your mother, wife etc. therefore Lucy might want to be comforted by her husband. It is strange how she was proposed to by 3 different men and she only married one but yet asks for attention from her husband who wanted her desperately.

Lucy Westenra at the beginning of the novel followed Victorian ideals of femininity and was presented as loyal and chaste. This is illustrated when it says “you and I Mina dear, who are engaged and are going to settle down soon soberly into old married women, can despise vanity.” The quote here demonstrates that Lucy here wants to be a successful and perfect woman who wants to get married which makes her passionate about herself and her future.

This also demonstrates the contrast between the Mina in the past (Good) and Mina in the future (Bad). However, Lucy did question some of her ideals but decided to keep her opinion to herself. This is shown when it says “Why can ‘t they let a girl marry three men, or as many as want her, and save all this trouble? But this is heresy, and must not say it.” (Chapter 4).

The quote that Lucy has said is pretty typical of her but later on in the novel her gender is greatly emphasised after the vampire bite. Lucy is the character that stoker chose to sexualise instead of Mina Westenra so it is not a surprise that she would say that but if someone from the Victorian era heard her comment then they would be ashamed but she is right that she did keep it to herself else people would be disgusted. Through this quote, we are wondering whether she is realising that her previous made decisions are logical and she tries to resolve the problems of all men proposing to her.

Mina Harker shows her good side throughout the novel as she is presented as paranoid and responsible for her husband and his troubles. This is evident when it says “I loved him and honoured him more than I can say, and that my latest and truest thought would always be for him.”

Again Mina here is presented as the typical Victorian woman who takes care and worries about him and his well-being. This not only worries Mina Harker but also us, and makes us continue reading to find out when the next response from Jonathan will be. The word “loved”, in past tense, also might indicated that she no longer loves him but that clearly isn ‘t true just by the way she talks about him.

This care and enthusiasm for worrying about him also is present when it says “The poor soul who has wrought all his misery is the saddest case of all.” Mina feels sympathetic and perturbed for his husband Jonathan because she hasn ‘t heard from her husband for weeks. Meanwhile, Lucy (After the vampire bite) and the “3 weird sisters”, were sexually tempting rather than feeling mournful and worried about their close relatives and friends, if they even have any.

To conclude the argument, the points made summarised both “good” and “evil” sides of the novel which was depicted through women that stoker implemented to give the text a bit of drama. Stoker manages to manipulate our opinions 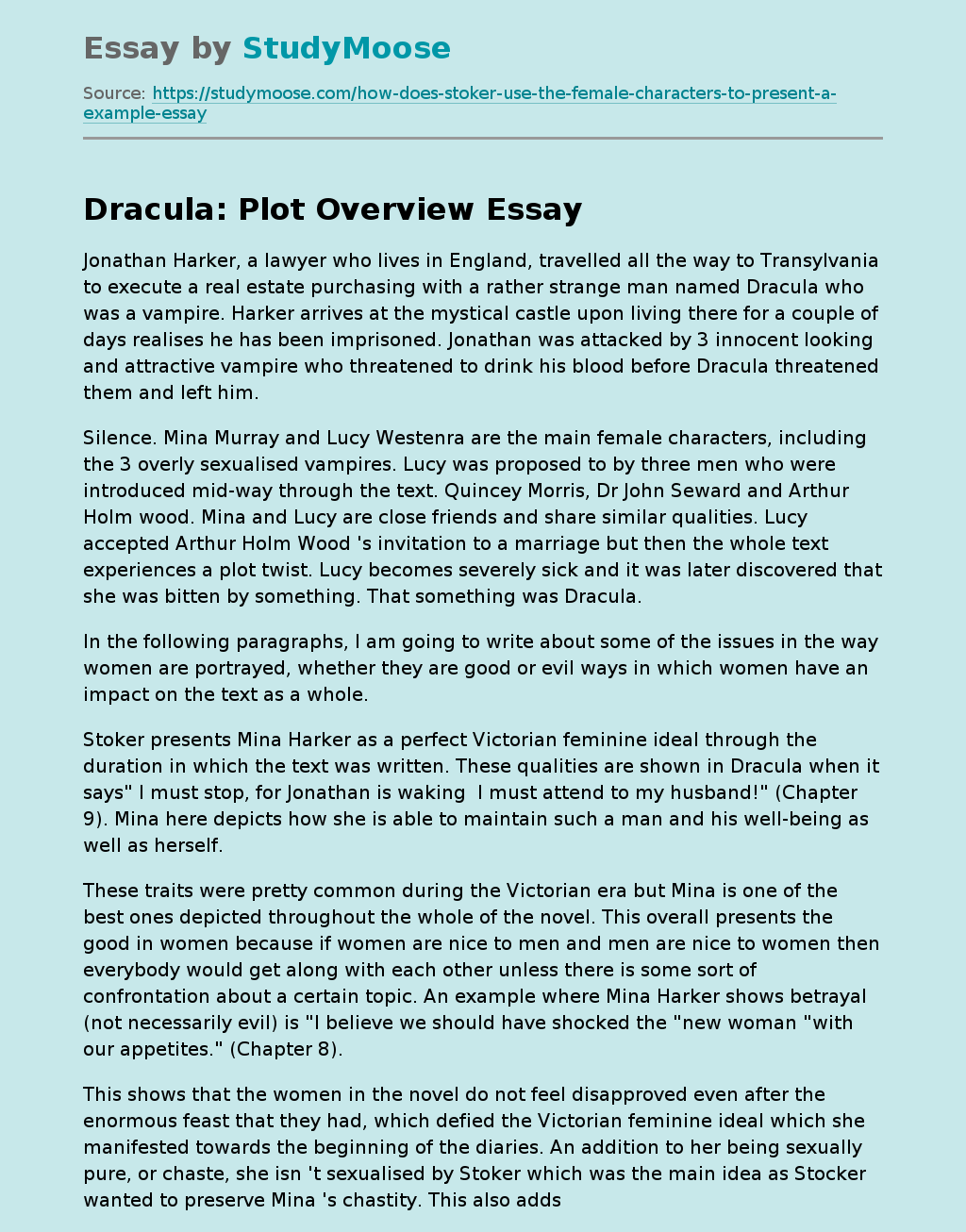