The rights of woman

Were women more rationally educated, could they take a more comprehensive view of things, they would be contended to love but once in their lives; and after marriage calmly let passion subside into friendship-into that tender intimacy, which is the best refuge from care. (122) Wollstonecraft suggests that a virtuous marriage should consist of friendship and limited sexual passion in order to survive and be productive. This takes effort on both the husband and the wife, but Wollstonecraft primarily preaches of the husbands need for control and repression of passion in exchange for intellectual stimulation.

Don't use plagiarized sources. Get your custom essay on
“ The rights of woman ”
Get custom paper
NEW! smart matching with writer

She acknowledges that women are sexual beings, but so are men. Thus female chastity and fidelity, necessary for a stable marriage, require male chastity and fidelity too. Men are required, as much as women, to put duty over sexual pleasure. Putting duty above pleasure, however, did not mean that feelings are not important. The goal, for Wollstonecraft’s ethics, is to bring feeling and thought into harmony.

The essential reform necessary for such equality, Wollstonecraft is convinced, is equal and quality education for woman. In order to be virtuous and truly feminine, women needed to be liberated from domestic entrapment and free to be educated. When discussing this issue of Wollstonecraft’s writing, Virginia Sapiro states, “Much of her work, was devoted to showing how contemporary social relations and law were unvirtuous; that is, they flowed from and created unnatural distinctions including those based on sex.

But she also devoted her sharp pen to those based on rank, property, religion, the clergy, the military, household organization, race and age”(35). Although Wollstonecraft spent time touching on the unvirtuous, it enabled her to explore what behavior was in need of reform. Feminist virtue and sexuality should be held sacred according to Wollstonecraft and pointing out the flaws in women enabled her to point out what needed to be changed. Wollstonecraft dissects the idea of sexual virtue and education of women from top to bottom, and in doing so she manages to demonstrate how absurd Rousseau’s theories are.

In part, she bases her criticism on an idealistic notion of human beings, arguing that we are all born to become as strong and virtuous as we can, and that to deny anyone that right, consciously or unconsciously, based on their sex, is irrational and nonsensical. In bringing together feeling and thought, rather than separating them and dividing one for woman and one for man, Wollstonecraft’s critique of Rousseau, was in exact contrast of his views of women. Women, for Rousseau, were incapable of reason, and only men could be trusted to exercise thought and reason. Thus, for Rousseau, women could not be citizens, only men could.

Wollstonecraft contradicted this idea and suggested that women were equal to men and deserved the right to be treated with dignity. Wollstonecraft’s A Vindication of the Rights of Woman is a feminist and political commentary and focuses partly on feminine virtue and sexuality in the Eighteenth Century. Wollstonecraft gives a radical view of gender roles in eighteenth-century society and the importance of educating women in order to be more productive members of society and better wives. She maintains that sexual desire and impulses should be contained and women should strive to be educated to improve marriage and their own self worth.

She attacks the character of both men and women in order to portray her point of the importance of sexual constraint and education of women. According to Christine Stansell Yet for all the hostilities to actual women embedded in it, the Vindication’s achievement was to announce, and then to hammer home, a startling proposition: that the revolutionary criticism of absolute power and its perfidious consequences in human character could accurately be extended to relations between men and women. The book is slapdash, repetitive, and circular, but it is genuinely powerful in its exposition of this central idea.

Seemingly natural social expectations about how women should think and act, Wollstonecraft contended, were in truth born of men’s despotism and women’s subservience, grounded in a system of privilege as corrupt as any monarchy. No one had ever written this before. Conservatives denounced her as “a hyena in petticoats,” the English equivalent of “the revolutionary harpies of France, sprung from night and hell”; Americans loved her; and British women of liberal disposition embraced her. (51) Wollstonecraft left her mark on Eighteenth Century society and feminist writers for centuries to come.

She help to liberate female thought and strived for the betterment of man- kind. She concludes her argument of A Vindication of the Rights of Women with a warning and insight to all men by stating Be Just then, O ye men of understanding! And mark not more severely what women do amiss, than the vicious tricks of the horse or the ass for whom ye provide provender – and allow her privileges of ignorance, to whom ye deny rights of reason, or ye will be worse than Egyptian task-masters, excepting virtue where nature has not given understanding! (201)

Wollstonecraft explores each part of her A Vindication of the Rights of Woman logically and judiciously while pointing out the flaws of sexual politics and feminist virtue in eighteenth-century society. Mary Wollstonecraft set out her defense of women as rational beings, equally capable of benefiting from education and of performing the duties of citizens in her A Vindication of the Rights of Woman. Male power had prevented women from realizing their moral and intellectual capacities, and prohibited them from being able to exercise genuine judgment or attain genuine virtue.

Nevertheless, while the equality of men and women as rational beings was central in her Vindication, the equality of roles was not. Women could still perform their duties as citizens from within the home and men as well as women needed to control their sexual desires in order to be productive husbands and wives as well as good citizens. Sexuality and feminine virtue were central to Wollstonecraft’s argument and she prevailed in attaining her goal. Works Cited Gubar, Susan. “Feminist misogyny: Mary Wollstonecraft and the paradox of `it takes one to know one’. ” Feminist Studies, 12:3 (1994) : 452-74.

Carr maintains that Wollstonecraft’s view of what women should become in order to improve society was radical for the time and helped pave the way for feminist thought. Carr proposes that even though Wollstonecraft spends a great deal of time discussing the lack of virtue society, especially non-educated women posses, Wollstonecraft does so in order to point out the behavior in need of reform. Feminine virtue, according to Carr is something that Wollstonecraft believes is in jeopardy and needs to be reformed, and the best way to accomplish that reform is through education. 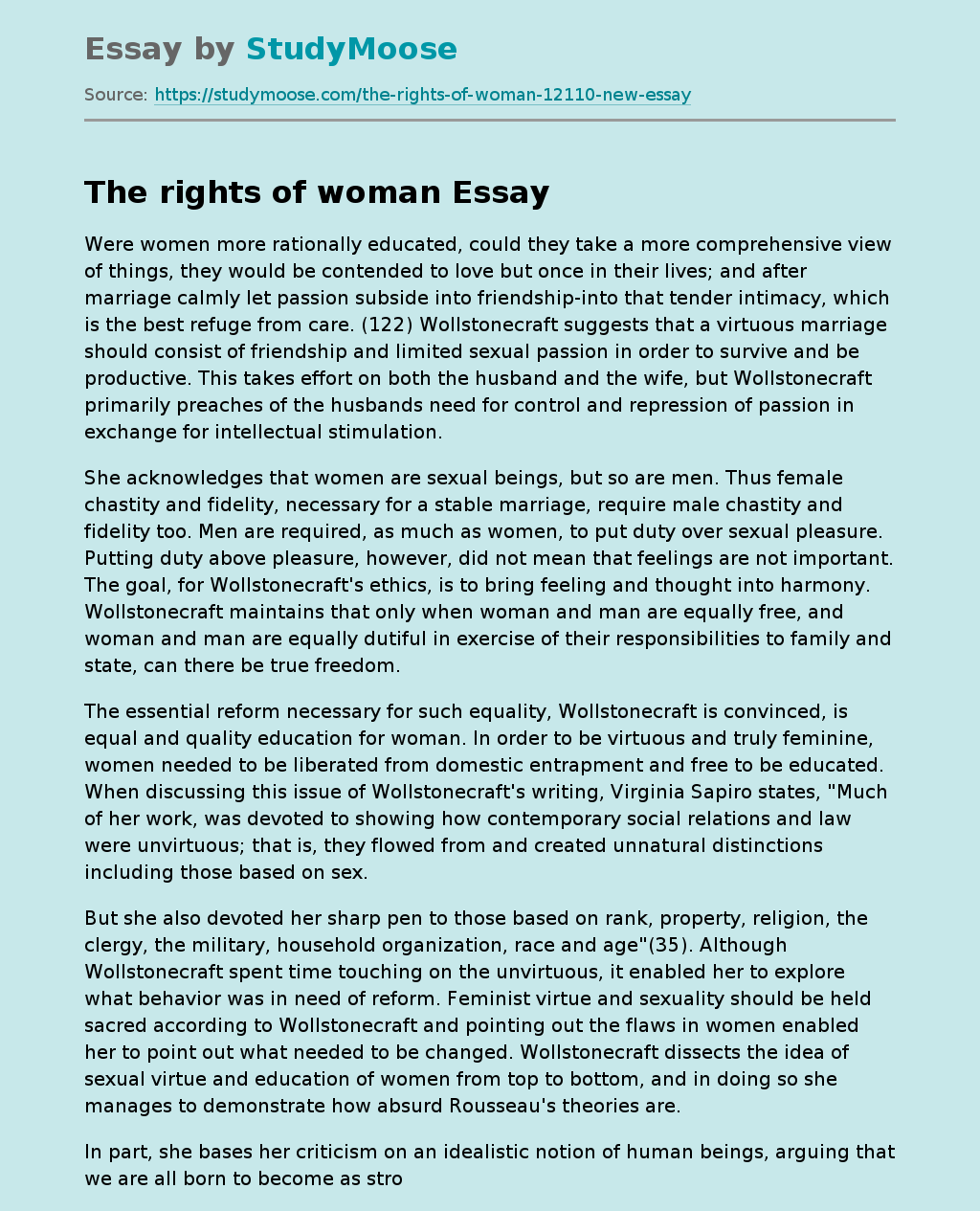