Fiction is often used as a vehicle to convey radical ideas to readers. These ideas are usually reflected in the themes of the stories so that the clarity of expression is more apparent. The theme of Charlotte Perkins Gilman’s “The Yellow Wallpaper” is quite unique in that it expresses feministic ideas in a seemingly ordinary situation. “The Yellow Wallpaper” is a story that reveals various truths about the woman and chronicles the feministic transformation of this woman towards modern womanhood.

Don't use plagiarized sources. Get your custom essay on
“ Feminine Transformation In Gilman’s “The Yellow Wallpaper” ”
Get custom paper
NEW! smart matching with writer

Gilman employs the first person perspective in her story to allow her unnamed protagonist to reveal elements of her emotions that would otherwise be concealed from the audience. The protagonist, along with her physician husband and a certain Jenny move into a huge house for the purpose of her recovery from an illness; in the house the husband assigns a room for the both of them which is a large room with distinctive yellow wallpaper all over the walls. The protagonist is then disturbed by the wallpaper and begins to derive images from it which in turn is used as a metaphor for her feministic transformation.

The earlier part of the tale reveals much about how the traditional woman actually is. The very first aspect of the traditional woman that one would easily notice from the text is a submissive personality. The lines, “But John says if I feel so, I shall neglect proper self-control; so I take pains to control myself – before him, at least, and that makes me very tired.

” (Gilman) illustrate how the protagonist neglects her own feelings before her husband and this implies that if she prioritizes what her husband felt over what she felt, she was quite likely to do the same with other more menial things making her exceptionally submissive.

Another aspect of the woman revealed in earlier parts of the tale is the feminine view on marriage. In the lines, “John laughs at me, of course, but one expects that in marriage. ” (Gilman) the protagonist describes how her husband reacts to her when she complains about something weird in the house they were moving into. When the husband laughs, the protagonist concludes that this is normal when two people are married. In effect, the protagonist views marriage as an excuse for ridicule and the fact that she is married to someone requires that she accept that ridicule as part of being married.

This is a strange perception on the part of the protagonist but because of the submissive attitude of this main character it is not surprising that she should think this way. Other than this, her submission even affects her desire to write as she conceals her writing, hence, the protagonist admits, “I did write for a while in spite of them; but it does exhaust me a good deal” (Gilman) because she had to write despite contradictions from her husband as this made her feel better.

The decision of the protagonist to write expresses the protagonist’s, “struggle to throw off the constraints of patriarchal society in order to be able to write. ” (Thomas) So, in these first few parts, the author describes the current state of the protagonist, where “Women were cast as emotional servants whose lives were dedicated to the welfare of home and family in the perservence of social stability”. (Thomas) In a way, the author even discreetly refers to the sexual inadequacies of the relationship by referring to a “nailed-down bed” in the lines, “I lie here on this great immovable bed – it is nailed down, I believe…” (Gilman)

Eventually, as the protagonist focuses her attention on the yellow wallpaper and the fact that her husband insists that they do not change it despite pleas from the protagonist, she begins to see the wallpaper as something else reflecting the bondage that she experienced from being isolated and treated inappropriately by her husband. This is quite clear in the lines, “Behind that outside pattern…a woman stooping down and creeping about behind that pattern. ” (Gilman) Here, the protagonist initially describes a woman apparently caged behind the wallpaper patterns.

While this could be images within the protagonist’s mind, it definitely reflects how she feels being in the room and in her situation. This image of bondage is further amplified by the lines, “At night in any kind of light…worst of all by moonlight, it becomes bars! The outside pattern I mean, and the woman behind it is as plain as can be. ” (Gilman) It is at this point that the protagonist expresses an intrinsic feeling of bondage because she is not able to express it outwardly, and so, projects the feeling unto the wallpaper.

This particular incident, “is a reaction to the lack of free agency that women had in the late 1800’s “. (Gilbert) Soon, days before the last day the couple was to spend in the mansion, the protagonist breaks free and becomes a new, more liberal woman. This is implied in the lines, “I pulled and she shook, I shook and she pulled, and before morning we had peeled off yards of that paper;” (Gilman) which the protagonist used to describe her peeling off the paper. During the motions she admits to helping the woman behind the patterns but indirectly, this implies that the woman she was helping was herself.

The act, therefore, of tearing the wallpaper was parallel to freeing the woman behind the patterns, and so, freeing herself from her personal bondage. (Garcia) The protagonist, hence, went from being a traditional woman to a liberated woman in her feminist transformation, even when the conclusions of the story seemed to imply that the protagonist had lost her mind because of the isolation, hence, the lines, “”I’ve got out at last,” said I, “in spite of you and Jane. And I’ve pulled off most of the paper, so you can’t put me back! ” (Gilman) where she had finally fused her own persona with the persona of the woman behind the patterns.

Quite obviously, the textual evidence in this tale consistently describe the struggles of a woman from being the kind enslaved by a patriarchal society to someone who was able to express her own individuality, albeit, unconventionally. The story very clearly describes how one woman transformed gradually from being traditional to being the new or modern woman. ? Works Cited Garcia, Viola. “Charlotte Perkins Gilman’s “The Yellow Wallpaper”. ” fgcu. edu. N. p. , 2009. Web. 1 Aug. 2010. <http://itech. fgcu. edu/faculty/wohlpart/alra/gilman. htm>. Gilbert, Kelly. 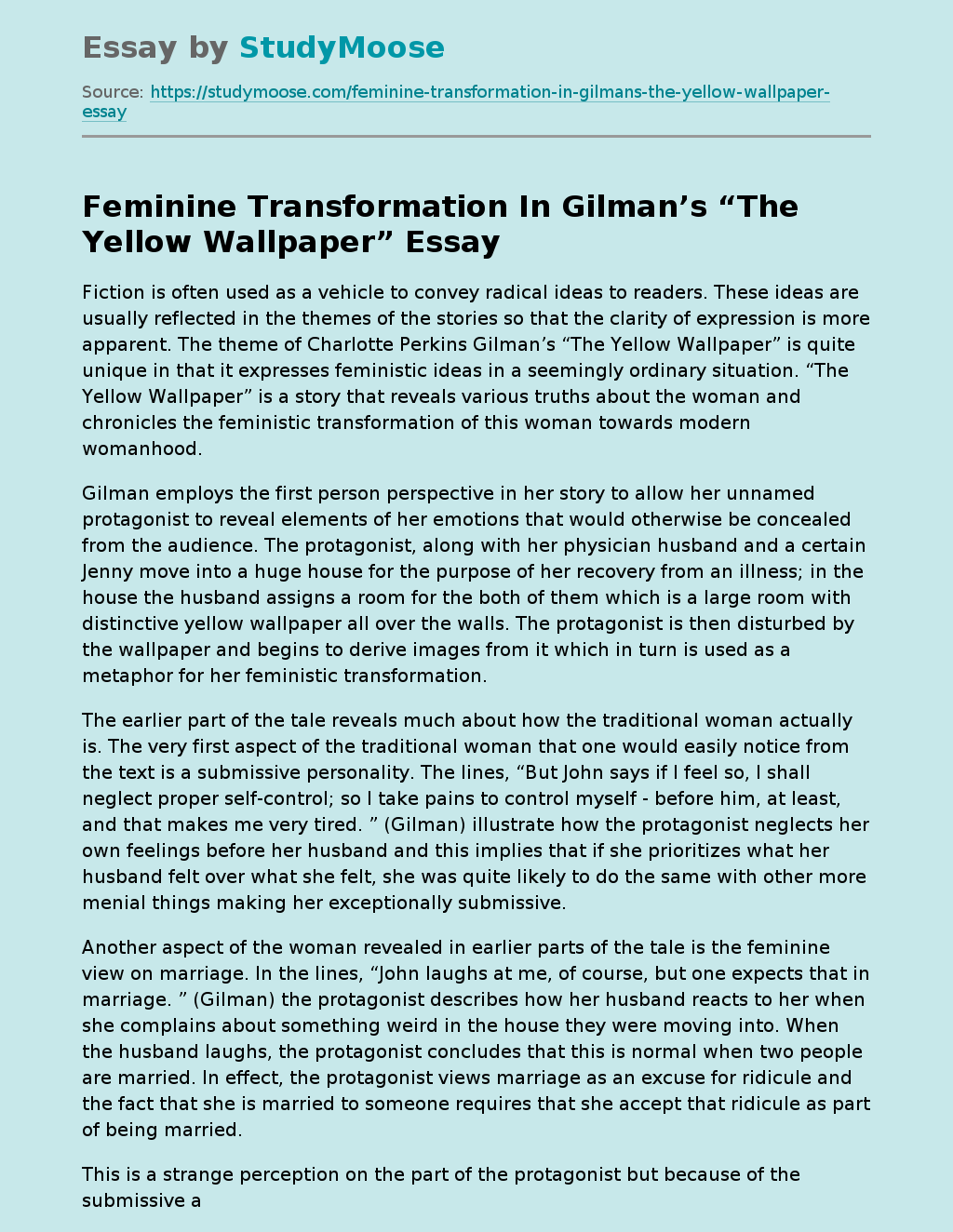