A review of Harper Lee’s novel To Kill a Mockingbird

In the novel, To Kill a Mockingbird, Harper Lee addresses many controversial issues. Such issues as, racism, discrimination, and social class are explored. During the 1950’s in the small county of Maycomb, the mentality of most southern people reflected that of the nation. Most of the people were racist and discriminatory. In the novel, these ideas are explored by a young girl, Scout. The readers see the events that occur through her eyes.

Don't use plagiarized sources. Get your custom essay on
“ Harper Lee’s Novel To Kill a Mockingbird ”
Get custom paper
NEW! smart matching with writer

In the book, Scout’s father, Atticus, tells Scout and Jem, “I’d rather you shoot at tin cans in the backyard, but I know you’ll go after birds. Shoot all the bluejays you want, if you can hit’em, but remember its a sin to kill a mockingbird.” (pg. 69) The mockingbird is a symbol for two of the characters in the novel: Tom Robinson and Boo Radley.

The mockingbird symbolizes these two characters because it does not have its own song.

Throughout the novel, Scout, Jem, and Dill are curious about the “mysterious” Boo Radley because he never comes outside of his house or associates with anyone in the neighborhood. The children are, in fact, afraid of him because of all the stories they hear about him from the people in Maycomb. For example, Miss Stephanie tells the children that while Boo was sitting in the living room cutting a magazine, he “drove the scissors into his parent’s leg, pulled them out, wiped them on his pants, and resumed his activities.” (pg. 11) After hearing stories like these, the children consider him to be evil. Gradually they assume more about Boo because he never plays outside or with anyone, and therefore, the children are not convinced otherwise. Boo Radley becomes a game for the children; over the summers they act out “Boo Radley scenarios” that they believed to be true.

Over time they create new parts to the story: they even include Mrs. Radley into the story and portrays her as a poor woman, who after she married Mr. Radley, “lost her teeth, her hair, and her right forefinger.” (pg. 39) These stories are based on the gossip that trail through their neighborhood. In realty, no one knew anything about Boo Radley; he stayed inside of his house and remained reclusive in Maycomb county. At the end of the book, Scout finally meets Boo Radley after he helps her and Jem escape Mr. Ewell. She finds that her beliefs about him are not true. Essentially, she finds the songs that the neighbors were “putting into his mouth” were not true.

In the book, Boo Radley is a micro version of Tom Robinson. Boo is the outcast of the neighborhood, but at the time, Tom Robinson was the outcast of the society. The novel centers around the trial of Tom Robinson. To the people of Maycomb county, Tom Robinson is just a “sorry nigger,” who committed an unthinkable crime. In the novel, Tom represents the black race in American society. He is a victim of racism, which was the major controversy in our culture at the time. Like Boo Radley, Tom Robinson is characterized by what the people of Maycomb county say about him. After being accused of rape, most of the people see him as an evil beast. During the trial while Bob Ewell testifies, he points to Tom Robinson and says, “I seen that black nigger yonder ruttin’ on my Mayella.” (pg. 173)

According to Mr. Ewell, Tom Robinson is an animal who tormented and violated his daughter. Throughout the trial, Tom Robinson is portrayed in this manner because of the racist mentality of the people in Maycomb. Even though there is a sufficient amount of proof which shows he did not commit the crime, Tom is a black man who will be denied justice. Atticus reinforces this idea when he tells Jem, “in our courts, when it’s a white man’s word against a black man’s, the white man always wins.” (pg. 220) Generally, this was the mentality of most Americans at the time. Tom Robinson is a Boo Radley, but on a larger scale. He is an outcast, as well as all the other black Americans in the country. Black people did not have their own song; other people sang their songs based on their beliefs about them.

Like Boo Radley, people only knew Tom Robinson through what other’s said about him. Throughout the trial, Scout and Jem believe in Tom Robinson’s innocence. They see him for who they believe he is, and do not know enough about “racism” to be a part of it. They did not believe the trial was fair because they believed there was evidence in Tom Robinson’s favor. At the end of the book, however, Scout realizes the same about Boo Radley. When she finally meets him, she sees how unfair she has been to him. She and Jem had believed all of the horrible stories about Boo without knowing him. In actuality, Boo Radley contradicts everything that the children believed about him. Boo Radley is a representation of Tom Robinson on a smaller level. Tom Robinson is a reflection of the society as a whole.

The fact that no one realized the unfair treatment of Tom Robinson made his death that much more tragic. In To Kill a Mockingbird Harper Lee uses the mockingbird symbolize of Tom and Boo. Boo Radley is an outcast in the neighborhood, and Lee is trying to show that every neighborhood has a Boo in it. She relates Tom Robinson to Boo Radley, and shows that Tom reflects society on a larger scale. He is representative of the outcast in society throughout the United States. But in reality, there are Tom Robinson’s in all of our neighborhoods or communities, whether they are black or white. When Atticus tells Jem and Scout that it is a sin to kill the mockingbird, this refers to the actions directed towards Tom and Boo. It was a sin to dislike Tom and Boo based on what others say about them. They were punished by the people in Maycomb because they did not have their own voice.

Lee is trying to explain to her readers that there are many people without their own voice in our society. At the time, Black Americans did not have a voice. But, as it is a sin to kill the mockingbird, it is a sin to kill those without a voice. The message of the novel is to stop knocking those people down who do not have a voice. Scout realizes that it was wrong to assume evil things about Boo Radley. Furthermore, it was unfortunate that the people of Maycomb county did not realize their unfair treatment of Tom Robinson. But most importantly, it is tragic that the American society did not recognize the injustice done to the black race. 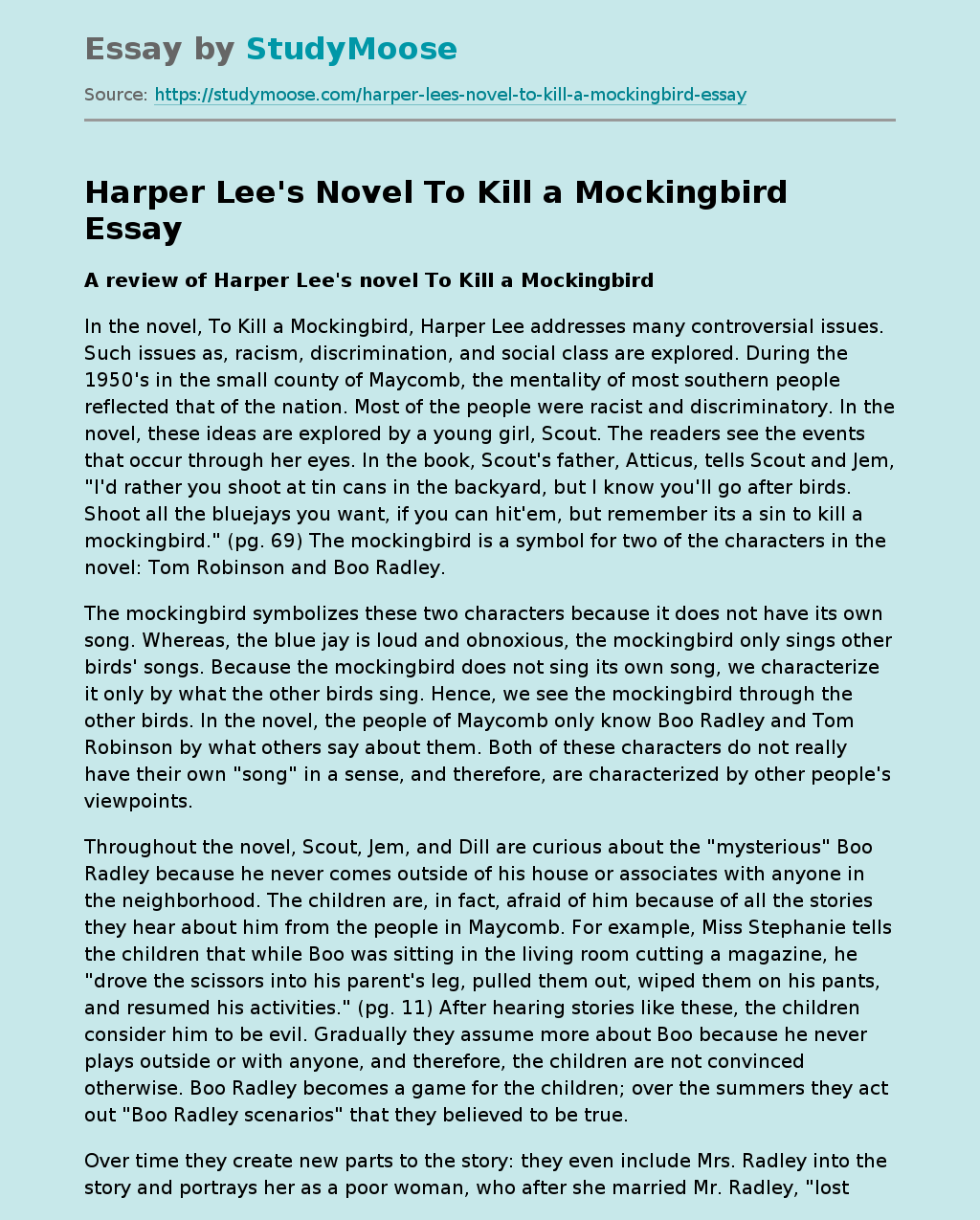