“Hamlet’s soliloquies are embarrassingly outdated and unnecessary” “The soliloquies are what make the play. They bring the audience closer to Hamlet and offer profound observations on humanity” Consider both these views. What is your view of the soliloquies in ‘Hamlet’? Hamlet has, in total, six soliloquies in the play, each of them offering an insight to his thoughts and feelings. However as Hamlet’s sanity grows more questionable so do his soliloquies and therefore both these statements can be supported by evidence from the text.

Don't use plagiarized sources. Get your custom essay on
“ Hamlet’s soliloquies are embarrassingly outdated ”
Get custom paper
NEW! smart matching with writer

The first critic views the soliloquies in a very negative way and claims that not only are they ‘unnecessary’ but are also ’embarrassingly outdated. ‘ In support of this it can be argued that there is not a lot of important content to the soliloquies; Hamlet appears to say a lot but in-fact rarely says anything of great significance to the plot. For example in the first soliloquy Hamlet talks about the death of his father and his mother’s quick marriage shortly after but this is not for the audience’s benefit as this has already been previously mentioned.

And in the fifth soliloquy, he talks about punishing his mother, displaying a hate for her that the audience have been fully aware of since the beginning of the play. As well as this, Hamlet constantly repeats himself in his soliloquies for example in the first one he frequently mentions how quick his mother remarried after his father’s death, ‘and yet within a month’ ,’a little month e’er those sheets were old’ ‘within a month, ere yet the salt of most unrighteous tears…

‘ In the fourth soliloquy he repeats the phrase ‘to die: to sleep’ and repeatedly talks about death, and in the fifth he repeats the same idea again ‘let me be cruel, not unnatural’ ‘I will speak daggers to her but use none’ ‘my tongue and soul in this be hypocrites.

‘ While this effectively shows his procrastination, the reality is that his soliloquies lack substance, which could very well render them ‘unnecessary. ‘ As for embarrassingly outdated, there are elements of embarrassment to Hamlet’s soliloquies that causes them to seem out of date.

For example the way that Hamlet speaks in his soliloquies. Even when in a passion, his speech can often seem false and unrealistic, for instance he appears to talk, not only to himself, but individual organs as well. In the first soliloquy he says ‘but break, my heart,’ in the second ‘and you, my sinews, grow not instant old’ and in the third ‘about my brains! ‘ Yes, it illustrates Hamlet’s thoughts, but on the other hand it appears unrealistic and contrived.

Hamlet also uses references from mythology in his soliloquies like ‘Hyperion’ in the first, ‘Hecuba’ in the third and ‘Nero’ in the fifth. These references could make the soliloquies seem outdated as they are ancient, mythological characters and may not have much relevance to the audience of the time. The second critic takes the opposing view and claims that the soliloquies ‘make the play’ and ‘bring the audience closer to Hamlet and offer profound observations on humanity.

‘ With regards to making the play, Hamlet’s soliloquies do incorporate many of the themes and issues of the play; they talk about depression, betrayal, loss, love and loyalty and they are focused around Hamlet, the pivotal character in the play and therefore hold relevant to the play. Through the use of soliloquy, Shakespeare allows us as an audience to access Hamlet’s innermost feelings, drawing the audience closer to him. Through his soliloquies we are able to understand Hamlet more and begin to piece together his personality and hence begin to understand him as a person and his behaviour.

For example Hamlet expresses feelings of misogyny in many of his soliloquies. In the first soliloquy Hamlet associates negative qualities of weakness with women ‘Frailty, thy name is woman’ and in the third soliloquy, in a fit of self loathing, he compares himself to ‘a whore’ and ‘like a very drab. ‘ These feelings most probably stem from the intense hate he feels towards his mother. He is increasingly bitter towards her through the play for the way she betrayed her father and gave in to Claudius. This not only shows her disloyalty but her weakness as well.

Hamlet then begins to associate these feelings with all women which is why he then turns against Ophelia, whom we understand he once had very strong feelings for, and becomes disillusioned with love describing it as ‘the pangs of despised love. ‘ Understanding his personality and why he becomes the man he is at the end of the play brings the audience closer to him as they follow the demise of his character. We also see his other character traits like his sarcasm ‘what an ass am I: this is most brave’ which is conceived through the bitterness he feels for everyone and everything, including himself.

We see his self depreciation ‘my dull revenge’ which often extends as far as self loathing ‘I am pigeon-livered and lack gall’ and the way he over analyses everything around him ‘whether it be bestial oblivion or some craven scruple of thinking too precisely on th’ event. ‘ The audience gain a strong sense of Hamlet’s hate: for his mother ‘o most pernicious woman’; Claudius ‘bloody, bawdy villain’ himself, love, and life which he describes as a ‘sea of troubles. ‘ The fact that life is represented as a sea symbolises Hamlet’s feeling of helplessness against it and the magnitude and weight that it carries.

Through his soliloquies, we learn of Hamlet’s increasing desperation as he delays his vengeance for as long as possible. Hamlet’s procrastination frustrates him and he becomes angry at himself yet still does not do anything, ‘why yet I live to say this thing’s to do, sith I have cause and will and strength and means to do’t. ‘ The tone of the soliloquies vary from brutal determination ‘now could I drink hot blood’ to complete desperation ‘what a rogue and peasant slave am I.

‘ They seem the peak and deteriorate according to his level of confidence and reflect his mood swings, possibly a sign of his madness and his spiral into depression. All of these are accountable for Hamlet’s depression, and whether or not it is self-inflicted, we can understand his reasons why. Although they do offer insight into Hamlet’s personality and bring the audience closer to him, the soliloquies also come with a twist, for as Hamlet sinks into depression and possibly madness, the audience begin to question if his ‘innermost thoughts’ are strictly reliable.

This allows us profound insight to an unstable mind and how Shakespeare presents depression and madness through thoughts and feelings which in itself offers an insightful observation on humanity. Shakespeare uses Hamlet to raise questions about human nature and offers his own opinion. Hamlet considers the difference between animals and humans and what separates the two and what defines a human. In the sixth soliloquy he asks ‘what is a man if his chief good and market of his time be but to sleep and feed? A beast-no more’ and where humanity falls short in some characters, they referred to in animal terms.

Hamlet describes himself as having ‘bestial oblivion’ which highlights his forgetfulness and heedlessness, and when describing his mother’s insensitivity says ‘a beast that wants discourse of reason would have mourned longer. ‘ Hamlet explores the meaning of family and the ‘family ties’ that bond people together. He understands the importance of being loyal to his father ‘now to my word’ and although he delays his promise as long as possible, it is perhaps the reason that he delaying his duty as a son that makes him so frustrated ‘I… can say nothing. No, not for a king upon whose property and most dear life a damned defeat was made.

Am I a coward? ‘ Hamlet also explores breaking those family bonds which both Claudius and Gertrude do. Claudius by killing his brother ‘so, uncle; there you are’ and Gertrude by marrying her mead husband’s brother and murderer. Hamlet does not believe that these bonds are broken through death and going against them is like going against nature and is ‘unnatural’. Whilst exploring human nature, Hamlet talks about the hypocrisy of humans, and their ability to ‘smile and smile and be a villain’ in regards to Claudius but he also comments upon his mother’s and even his own in these soliloquies.

The concept of bravery is explored and what it takes to be a hero and what makes a coward. Hamlet hates himself for being a procrastinator and asks himself ‘am I a coward’ whilst also channelling this self loathe to admire Fortinbras, despite the fact that he is his enemy because in him he sees the qualities Hamlet lacks himself like bravery ‘witness this army of such mass and charge, led by a delicate and tender prince’.

Hamlet looks at guilt and conscience and remarks ‘the conscience does make cowards’ and uses Claudius’ conscience to trap him ‘for murder, though it have no tongue, will speak with most miraculous organ’ showing an astute understanding of the way in which human nature works. In his depression and state of desperation, Hamlet asks what binds us so dearly to life.

If it were not for fear of the afterlife he says he would kill himself because life is not worth living, it is just a series of disappointments, ‘to sleep, perchance to dream – ay, there’s the rub, for in that sleep of death what dreams may come. ‘ Although these two views are opposing in the sense that one is negative and one is positive, I think that they both have elements of truth in them although I am more inclined to agree with the second statement that the soliloquies make the play, bring the audience closer to Hamlet and offer profound observations on humanity.

They do often seem quite unnecessary for the reasons previously outlined but I think that they are purposely written this way to illustrate Hamlet’s character. His lengthy speeches and repetitiveness show the way he over analyses situations, the more he thinks things through, the more frustrated he becomes. Also his repetition of needing to take action effectively demonstrates his procrastination and his soliloquies mark the different stages in his depression as the tone changes between them to show his decline into madness. 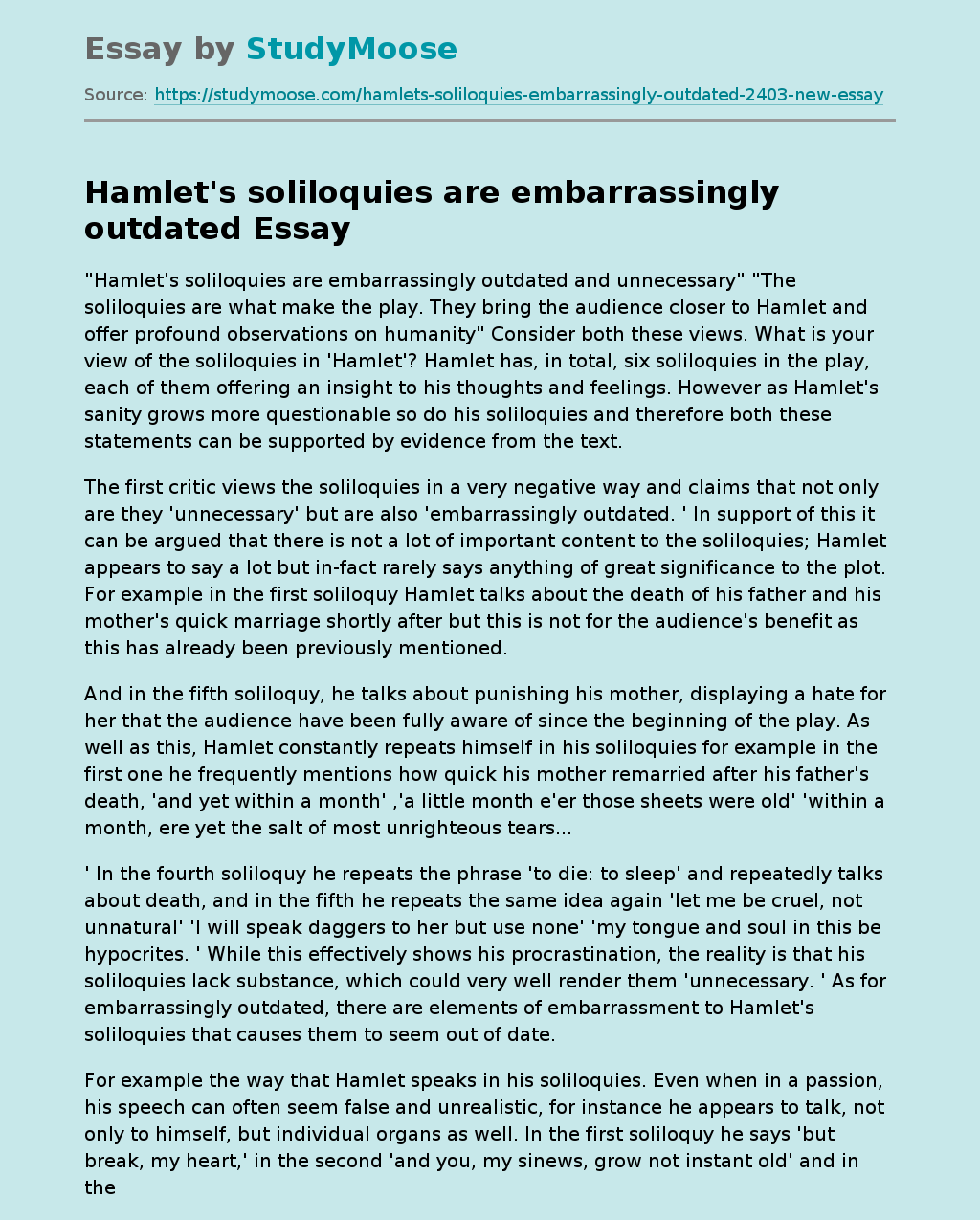