Eulogy on behalf of Hamlet

Good lords and ladies of Elsinore, I appreciate your attendance here today on this particularly significant occasion. We gather here, to offer our gratitude and sorrows respectively for the life and death of the greatest man I have ever known, Prince Hamlet. I understand that no assortment of words could possibly convey the degree of Hamlet’s stature, so I only hope that God will assist me in articulating an outline, a sample, of the masterpiece that was Prince Hamlet.

Don't use plagiarized sources.
Get Your Custom Essay on Hamlet Eulogy Just from $13,9/Page

Although fate has already accomplished its deed here on earth, I know Hamlet’s soul will proceed to the heavens, where perhaps he may live in a kingdom worthy of his gracious presence.

Hamlet was the only remaining rose amongst a garden bed overrun by weeds, confronted with treasury, betrayal and distrust from every direction. He rose above the superficial faces of the corrupted Royal court, and exposed Claudius for who he really was.

Loved by nobles, commoners and players alike, Hamlet was the most remarkable Prince we have ever known. Beloved son of the late King Hamlet and Queen Gertrude, royal courtier and loyal friend to many, he will not be forgotten. Forever in our hearts, Hamlet will remain in the highest regard as an individual of indisputable courage and nobility, steadfast loyalty and particular contemplation. Courage is best verified in a man’s darkest days, in moments of unrelenting pressure or despair.

Good Hamlet was left stranded in centre of a court full of corruption, facing immediate grief regarding his father’s death and his mother’s almost immediate remarriage. It was through his unwavering courageousness and nobility that he was able to proceed with not only his task of avenging his father in ending the corrupted reign of King Claudius, but also in restoring natural order to our country. His courage proved unflinching when put to the ultimate test when he was presented with death and uncertainty in his final days. It was indeed Hamlet’s absolute nobility and true valour that lead him to accept his fate for the good of the nation. ————————————————-

It was predominately through Hamlet’s heroic loyalty that his validity as a valuable friend and son was established and retained. Entrusted with an arduous task from the ghost of his father, he immediately felt obliged in carrying out the murder of Claudius by the virtue of previous loyalties. I am so grateful for the unconditional loyalty Hamlet induced upon me ever since our days studying at Wittenberg.

* I only hope that the heavens will graciously appreciate a man of Hamlet’s worth. 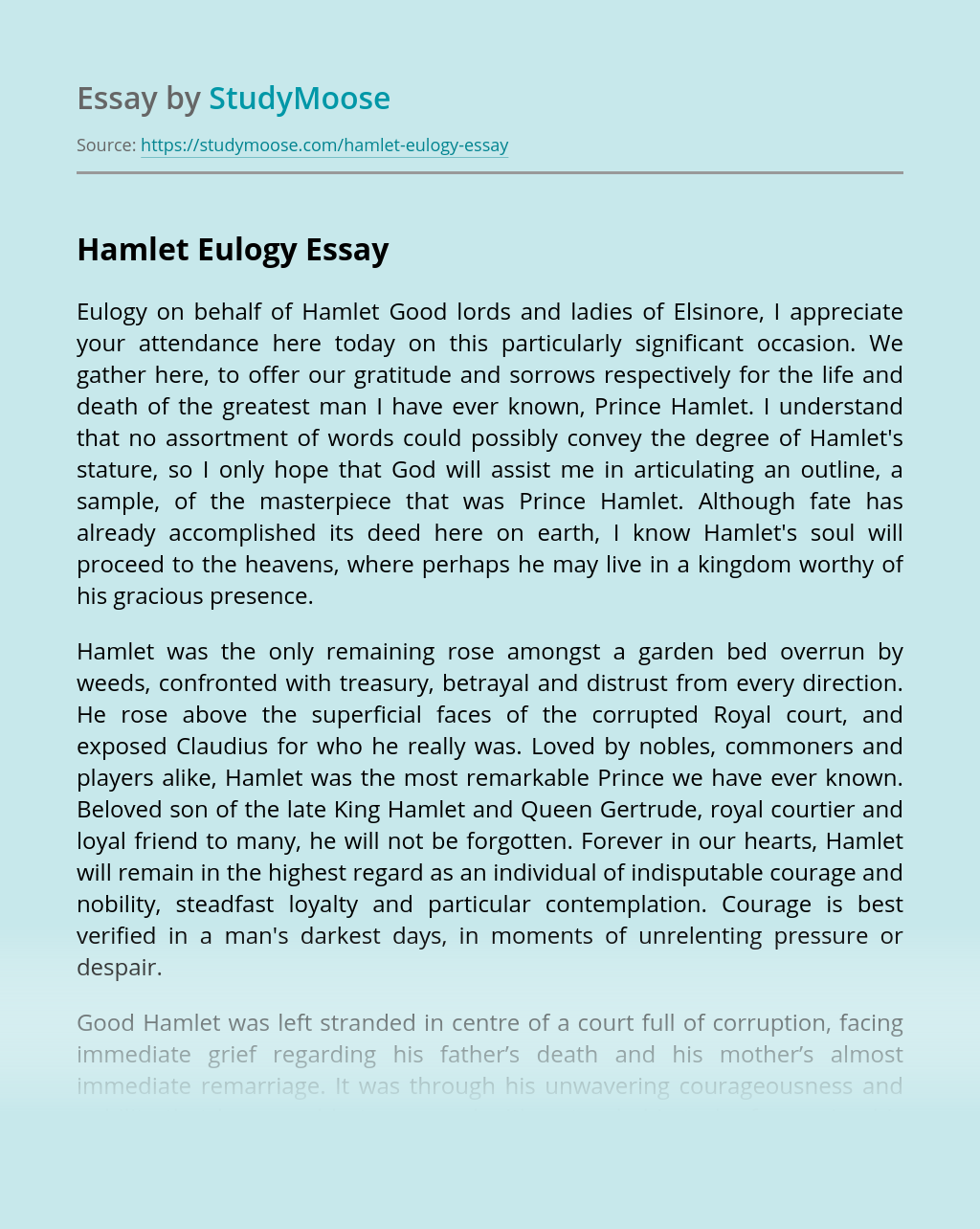