Shakespeare’s tragedy ‘Hamlet’ is the most famous play by an English playwright. The themes are same in the movie and play, namely humanism, humanity, that is, the values of each person, each human life in itself. According to many highly respected art connoisseurs, this is one of the most profound creations of the human genius, a great philosophical tragedy. It was written by Shakespeare in the Renaissance In the play of Shakespeare, the eternal theme of being is raised, how to remain a person among lies and betrayal.

Don't use plagiarized sources. Get your custom essay on
“ Hamlet Critical Analysis ”
Get custom paper
NEW! smart matching with writer

Several conflicts between characters are discussed in “Hamlet”. In the first place there are ethical problems: the struggle between good and evil, the appointment of man on earth, the confrontation of humanism, and anti-humanity. The main thing is Hamlet the humanist’s rejection of the ugly shortcomings of the royal court (Hamlet Full Text and Analysis – Owl Eyes, 2019). For the prince, the castle in Elsinore is a model of world evil. He understands this, and gradually his personal conflict related to the murder of his father turns into a historical conflict.

The heroes of the tragedy die, ironically: Laertes – from a sword, which he oiled with poison, in order to kill Hamlet under the guise of an honest and safe duel. The king dies from the same sword (at his suggestion, it should be real, unlike the Hamlet sword) and from the poison that the King prepared in case Laertes could not deliver a fatal blow to Hamlet.

Shakespeare’s tragedy Hamlet was originally written as a play, but as time has passed it has been produced, on many different occasions, as a motion picture.

The two forms share many similar scenes throughout the work. Three of these scenes are Hamlet’s encounter with his father’s ghost, Hamlet’s killing of Polonius, and Hamlet’s final battle with Laretes. The language and manner of play were saved, however, their interpretation changed.

The first major similarity between the play and the movie comes when Hamlet sees and talks with the ghost of his recently murdered father. In lines ten through thirteen the ghost exclaims to Hamlet, ‘Doomed for a certain term to walk the night and for the day confined to fast in fires till the foul crimes done in my days of nature are burnt and purged away.’ Likewise in the movie, this emotion fills Hamlet’s mind with both sorrow and hatred for his uncle. ‘Revenge his foul and most unnatural murder’ (Shakespeare,1992, lines 30-33). The ghost makes an emotional plea for Hamlet to revenge against Claudius.

Another major comparison between the movie and the play comes when Hamlet goes to confront his mother about her involvement in his father’s death and ends up killing Polonius. Gertrude, feeling Hamlet’s disgust for her actions, fears that he might murder her. As seen in lines 22-33 of Act III scene IV she calls for the help of the hidden Polonius. ‘What wilt thou do? Thou wilt not murder me? Help, ho!’ In the movie Gertrude has an extremely worried expression on her face and as she calls for help there is motion behind a giant tapestry. This enrages Hamlet even more because someone has overheard his suspicions. Similar to the play, in the movie the death of Polonius is shown as Hamlet removes his sword from the tapestry and loud crash is heard as his body crumbles to the floor.

Symbolism in “Hamlet” is depicted in both film and play, and is connected with characters and their behavior. For example, the image of Ophelia symbolizes eternal feminine beauty. Already in the Hamlet tragedy, the image of Ophelia is structured as a figure of reflection, a plane for projecting men’s reflections and ideas. The image of Hamlet is a symbol of disobedience to the established standards, and the desire to compete for legitimacy. Hamlet is distinguished by its nobility and comes from high humanistic ideas about man. This is his enormous resentment, which appears when he confronts the world of lies and crime, treachery and blasphemy surrounding him. The image of Claudia is a typification of lies and vanity that was quite common in the Renaissance. Thus, the main characters discussed are the main characters in Shakespeare’s tragedy.

Hamlet’s lack of will is a large-scale cultural and historical phenomenon. It is impossible to understand it without thinking in the era of Shakespeare and without forcing it to interpret the text of the tragedy, as it is read and heard today. The Shakespeare’s powder is not just a local spatio-temporal situation, not just England during the reign of Elizabeth II (Hamlet Full Text and Analysis – Owl Eyes, 2019). The era is a century of pan-European history, a vague and terrible post-reformation time, which brought a lot of people to apathy and anemia. The recognized sign of Prince Hamlet is his lack of will, a “jamming reflection” that delays normal spontaneous action. Only in the end of the tragedy, after much hesitation and excessive philosophical reflection, does the prince do what he had to decide immediately, that is, he kills his father’s poisoner and usurper of the Danish throne. The play is organized in such a way as to fully reveal the fate of Prince Hamlet. It consists of five acts, each of which represents certain components of the plot. At the same time, the film consists of three scenes. This composition allows to consistently reveal the main topic, and focus on the most important problems.

Camera movement in a movie ‘Hamlet’ is one thing that makes the film a work of art. It has deep and powerful roots. It allows for dynamic visual composition over time. There are different types of moving camera shots that differently influence on the aspect of the surrounding environment, supporting the theme and style of the story. The sound adds expressiveness to the story, and forces viewer to pay attention to the shown elements, what is not presented in the play. The montage of scenes helps to make the plot more interesting since they show change over time, what is not possible to depict through the play, which is smother manner. The contrast in settings, scenes and costumes shows how much better the modern version of the film is than the play. As a rule, the film has several significant drawbacks and does not fully correspond to the story of the story. In so many scenes, Hamlet rejects the plot of the original play. The play, on the other hand, is an original story written by Shakespeare (Shakespeare, et al., 1996). The game is an exciting fast-paced game that makes the reader want to read even more. The original play tells the story with original and full explanations of the plot, production and character. Reading a play forces the author to use his imagination to increase the pleasure of reading something that is not present in a movie that reflects a more contemporary version of the story. 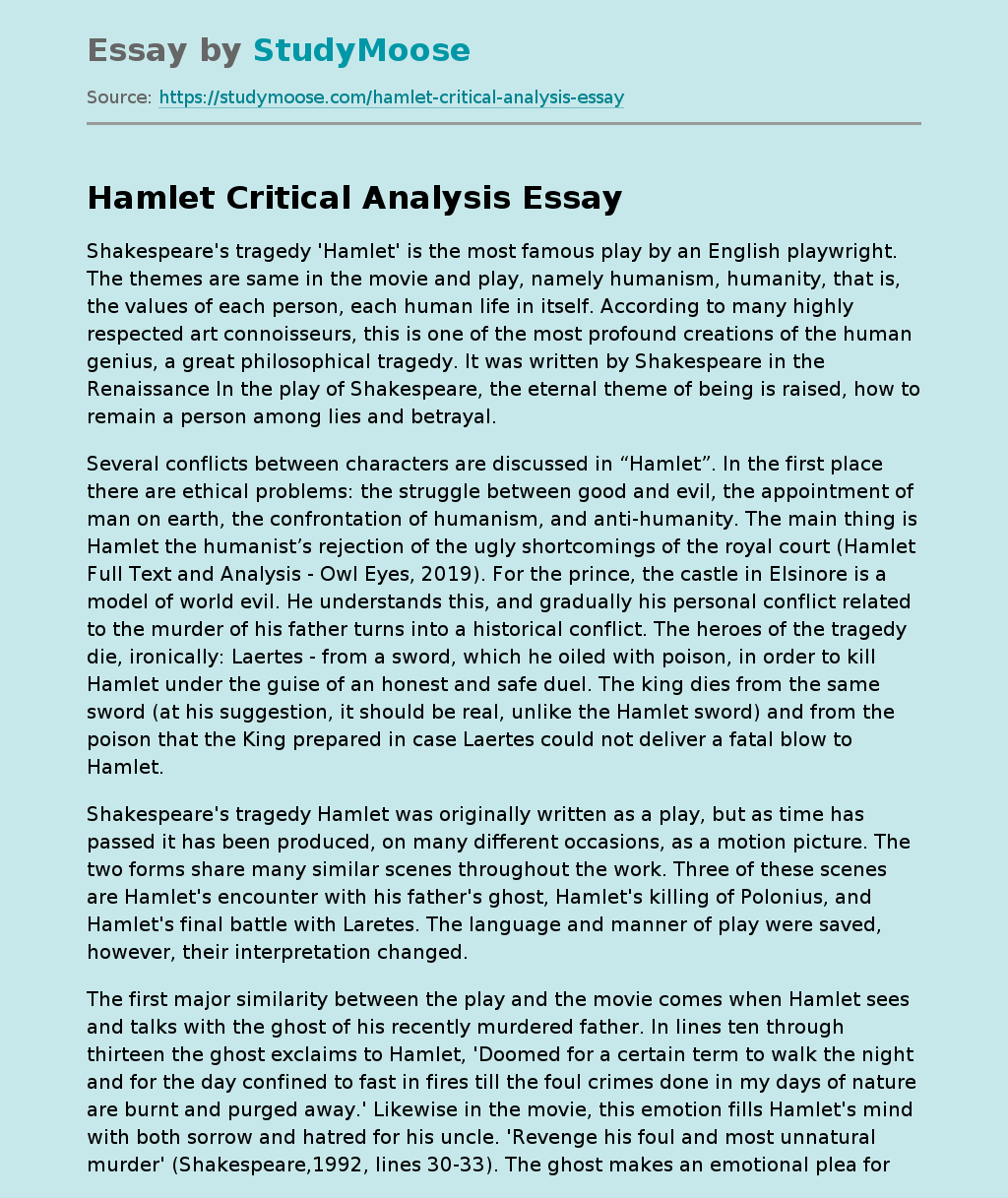