In Oscar Wilde’s play The Importance of Being Earnest reflected the changing role of Victorian women. The character Gwendolen Fairfax was most like the women of the time. She is much like her mother, Lady Bracknell, who seemed very strong and independent. The women of the Victorian age were interested in educating and improving themselves. Both intellectually and cosmetically, women wanted to be better and have more rights. Gwendolen was a pretentious women who was obsessed with the name of Earnest.

Don't use plagiarized sources.
Get Your Custom Essay on Gwendolen Fairfax Just from $13,9/Page

She said that she wouldn’t want to marry anyone without that name.

Her superficial attitude concerning this is reflective of Victorian times, when middle to upper-class women were most concerned with appearance and reputation. These women felt that it was very important to appear honorable and virtuous, and their husbands had to reflect that image. It was a pretentious attitude of the time. Gwendolen also attended lectures, which was a way of improving herself intellectually. She was a thinking woman, who had her own thoughts.

She is flirtatious with Jack/Earnest and comes off as a woman who expects her own way. She is much like her mother, Lady Bracknell. Lady Bracknell attempts to influence her daughter’s marital decisions, and it is clear that she is most concerned with image as well. Sources say that the ideas of marriage in the Victorian era were less romantic. Marriage served the purpose of a woman being taken care of and having an honorable reputation. Having a husband was very much a status symbol. We can see that even though Jack was lying about his name, he is supposed to be “Earnest.

” The importance of being Earnest as the play title suggests, is actually the importance of maintaining the right image of honor and respectability. The fact that Lady Bracknell was independently in charge of her daughter, shows that women were becoming a bit more free. She was not a single mother, but due to the sickness of the father she was able to do as she pleased and have a say in who her daughter marries. Before this time it was the father who had that right. Women slowly became more and more influential, and her character reflects that. 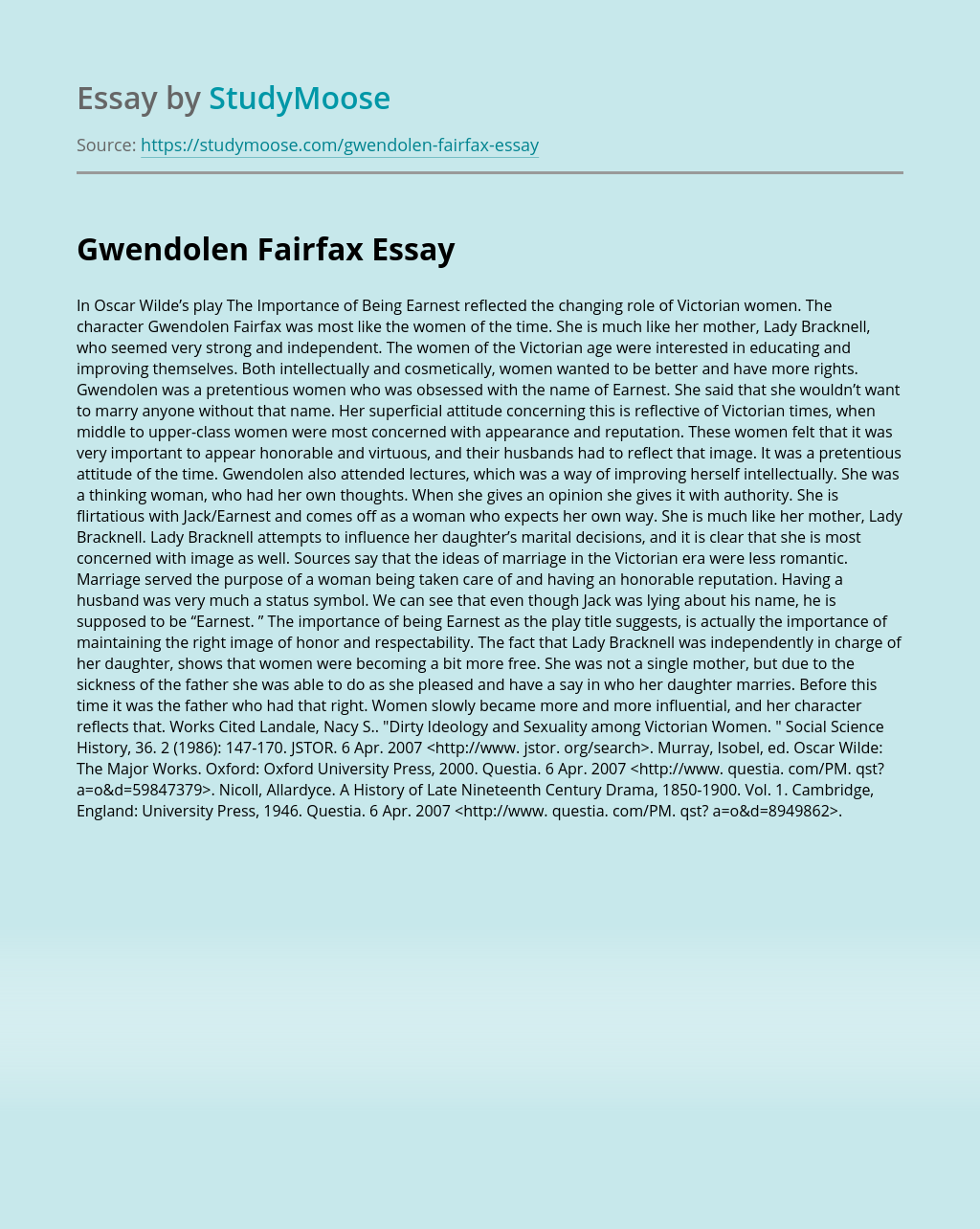 In Oscar Wilde’s play The Importance of Being Earnest reflected the changing role of Victorian women. The character Gwendolen Fairfax was most like the women of the time. She is much like her mother, Lady Bracknell, who seemed very strong and independent. The women of the Victorian age were interested in educating and improving themselves.... VIEW ESSAY

Timothy McVeigh (April 23, 1968- June 11, 2001) is popularly known as the convicted bomber of the Oklahoma Bombings which occurred on April 19, 1995. As a child, McVeigh was mild-mannered and well liked by his family and neighbors. He was closest to his grandfather Eddie who also gave Timmy his first gun, a .22... VIEW ESSAY

In Howard Zinn’s book, Passionate Declarations: Essays on War and Justice, Chapter 1 entitled, “Introduction: American Ideology,” begins with a discussion of a few instances in history where groups of people believed that other races and social classes were inferior to others (Zinn 1). The end result of these instances was that many, if not... VIEW ESSAY

In the period from 1500 to 1830, racial stereotypes were popular in the regions of Latin America/Caribbean and The United States And Canada and they had a significant effect on society, specifically societies with multiple ethnic cultures. The racial ideologies of these areas can be seen through the treatment of native peoples and the treatment... VIEW ESSAY