According to critic W.E. Garrett Fisher, “(Maupassant’s) view of human nature was an utterly distorted one. On all hands he only saw the cruelty, the bestiality, above all, the ineffable stupidity of mankind. We hardly find one man or woman in his books who illustrates the nobler side of life.” (Piana, n. pag.)

Indeed, French writer Guy De Maupassant’s works were based on ordinary incidents from everyday life, which exposed the true nature of people. (n. pag.) The Jewelry was no exception – it was built on the premise that first impressions of people are almost always wrong, as they constantly change, with unexpected results.

Don't use plagiarized sources. Get your custom essay on
“ Guy De Maupassant’s The Jewelry ”
Get custom paper
NEW! smart matching with writer

Set in Paris, The Jewelry centered on Monsieur Lantin, a chief clerk in the Department of the Interior, and his wife, who was unnamed throughout the story. The initial impression that the reader can derive from Madame Lantin is that she is a perfect woman. De Maupassant described her as “a perfect type of the virtuous woman in whose hands every sensible young man dreams of one day intrusting his happiness.

” (n. pag.) The reader can also conclude that Madame Lantin was the ideal wife and homemaker.

However, The Jewels’ plot identified Madame Lantin as the antagonist by unmasking the hypocrisy of her character. After her demise, Monsieur Lantin wondered how did she manage to make ends meet with his paltry salary of 3,500 francs a year. Madame Lantin had very expensive vices – frequenting the theater and her large collection of fake jewelry. De Maupassant wrote, “His salary, which, in his wife’s hands, had amply sufficed for all household needs, now proved scarcely sufficient to supply his own few wants. And he asked in astonishment how she had managed always to furnish him with excellent wines and with delicate eating which he could not now afford at all with his scanty means.” (Piana, n. pag.)

It was also The Jewels’ plot that answered Monsieur Lantin’s question. Broke and hungry, he was forced to go to the jewelry store in an attempt to pawn Madam Lantin’s jewels – and came out of the shop with 196,000 francs. Therefore, this incident revealed that Madame Lantin’s jewels were genuine, in sharp contrast to her claim to her husband, “Now look at them – see how well the work is done. You would swear it was real jewelry!” (Piana, n. pag.) It also refuted Madame Lantin’s fidelity – she most likely had a paramour who provided her with money and jewelry. (Piana, n. pag.)

After Monsieur Lantin told the jeweler that he had more jewels to sell to him (he managed to sell one of his wife’s necklaces for 18,000 francs), “one of the jewelry store’s clerks rushed out to laugh at his ease while another kept blowing his nose as hard as he could,” as if they were trying to suppress their laughter. (n. pag.) Chances are, they were mocking his ignorance about his wife’s adultery. The story ended six months later with Monsieur Lantin’s unhappy second marriage to a virtuous but ill-tempered woman. These circumstances allowed him to emerge as the protagonist – the loving husband who was cheated on by his late first wife and was trapped in a loveless second marriage.

The Jewelry was able to defend its argument that looks can really be deceiving. Madame Lantin, whom everyone praised and admired, turned out to be a greedy woman who cuckolded her husband for material wealth. Meanwhile, Monsieur Lantin became as fortune-hungry as she was by enjoying the money he got from selling her ill-gotten jewelries.

Money transformed him from an upright man who refused to sell a fake piece of jewelry to a man obsessed with profiting from his late wife’s jewels, regardless of the fact that she got these using illicit means. What added credibility to The Jewelry was that De Maupassant allowed the events in the story to naturally unfold and expose the characters’ hypocrisy in the process, drawing on the saying that there is no secret that will never be revealed. He also showed that anyone can be a hypocrite, hence his very generalized description of Madame Lantin and his refusal to give her a name.

Lastly, The Jewelry leaves the reader with an open-ended question: Which is better, gaining happiness from dishonesty, or experiencing misery as a result of honesty? 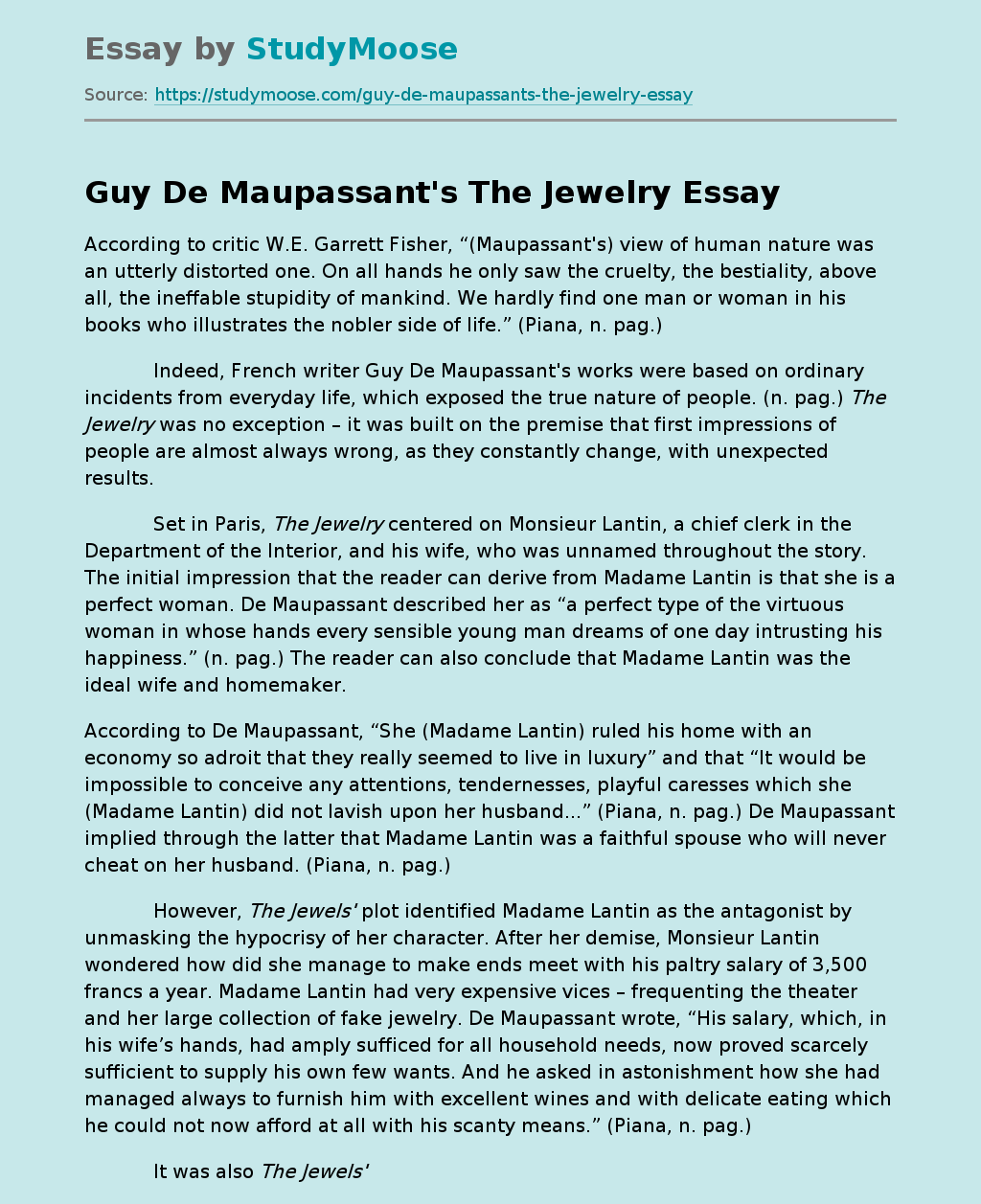