Character Change in “The Jewelry”

There have been many times in literature where writers will change the attitudes or beliefs of the main character of their story. Writers can do this a number of ways. They use things like tragic events or a change in setting to be the reason why a character changes. In Guy de Maupassant’s “The Jewelry,” the main character’s attitudes change multiple times throughout the story.

The story begins with the narrator describing how the main character, M. Lantin, fell in love and married the girl of his dreams.

Don't use plagiarized sources.
Get Your Custom Essay on Character Change in “The Jewelry” Just from $13,9/Page

He adores her so much that it is written that, “six years he married her, he loved her even more than he did the first day” (69). In fact, Lantin almost finds his wife to be flawless. The only faults that he finds in her are her love for the theatre and her passion for false jewelry. Lantin never understands his wife’s fondness towards fake jewelry.

They cannot afford real jewelry and it seems as though Lantin wants to save her the embarrassment of parading around with fake jewelry.

He tells her that she is better off wearing no jewelry so that she can show off her natural beauty and elegance. However, she does not listen to him and continues to wear her fake jewelry. At this point in the story, M. Lantin seems to be a stress-free man who is enjoying life with the girl of his dreams. He is not a rich man by any means, but, the love he shares with his wife fulfills his every need. Then, tragedy strikes. Lantin’s wife catches pneumonia one night after the Opera and dies eight days later.

After the death of his wife, Lantin’s character changes from a careless man to a soul in despair. The narrator describes his anguish by saying, “His despair was so frightful that in one single month his hair turned white. He wept from morning till night, feeling his heart torn by inexpressible suffering-ever haunted by the memory of her, by the smile, by the voice, by all the charm of the dead woman” (70-71). hair has turned white in a single month. Lantin suffers day and night and is haunted by the mere memory of his wife. He keeps his wife’s bedroom exactly the same and as time goes by, his memory of her remains strong. Lantin ends up getting into debt and losing all his money.

The first thing that comes to his mind is to sell his wife’s jewelry. The jewelry; which he does not think will bring him much money, has become an object of loathing and distant memories of his late wife. After rummaging through most of her items, Latin finds his wife’s pearl necklace that he thinks might be only worth a few francs. He goes into a jewelry store to sell it. There, he finds out that it is real, and that it is worth a substantial amount of money.

He goes into another jewelry store to receive a second opinion. To Lantin’s astonishment, not only is the necklace real, but the second store that he entered was the exact store where his wife bought the necklace for a substantial amount of money. It is here where Lantin’s character changes from being a sad and sorrowful man to a puzzled fellow searching for answers. This is evidenced in the text when Lantin is pondering to himself how his wife came across the money to buy such an expensive piece of jewelry. Maupassant describes Lantin’s puzzled mind by writing “He tried to reason, to understand. His wife could never have bought so valuable an object as that.

Certainly not. But then, it must have been a present! A present from whom? What for?” (72-73) Lantin is so bewildered by these events that he barely makes it home for the night. The next morning, he goes out and realizes he has no money to get anything to eat. Lantin then remembered the substantial amount of money that the jeweler had offered him for the pearl necklace.

At this point, Lantin’s mood changes again. He completely forgets his sorrows and no longer questions where his wife got the money for such expensive jewelry. The only emotions that Lantin is experiencing are ecstasy and sheer excitement. The text describes how Lantin’s desire was to “yell out to the passers-by ‘I am rich, too-I am! I have 200,000 francs!’ (74).” Lantin quits his job and dines at the finest restaurant. The story ends with Maupassant describing Lantin’s final mood change. Lantin marries a woman six months later with a terrible temper.

The story ends by saying that Lantin’s new wife, “made his life very miserable. (75)” Guy de Maupassant changed Lantin’s mood multiple times in a short amount of time. From the happiness of his first marriage; to the sorrow after her tragic death; to the bewilderment that he experienced when he discovered that his late wife’s jewelry was real and how much it was worth; to the delight in the riches he acquired from selling it all, and finally to the final misery he lives through because of his new wife.

It was brilliant stories by Maupassant because it showed his character go through so many emotions in such a short amount of time. Maupassant’s readers are bound to relate to at least of these emotions that Lantin experiences. This helps make the story more appealing and relatable. It is the reason why most writers use character change in their stories.

Character Change in “The Jewelry”. (2016, Apr 23). Retrieved from https://studymoose.com/character-change-in-the-jewelry-essay 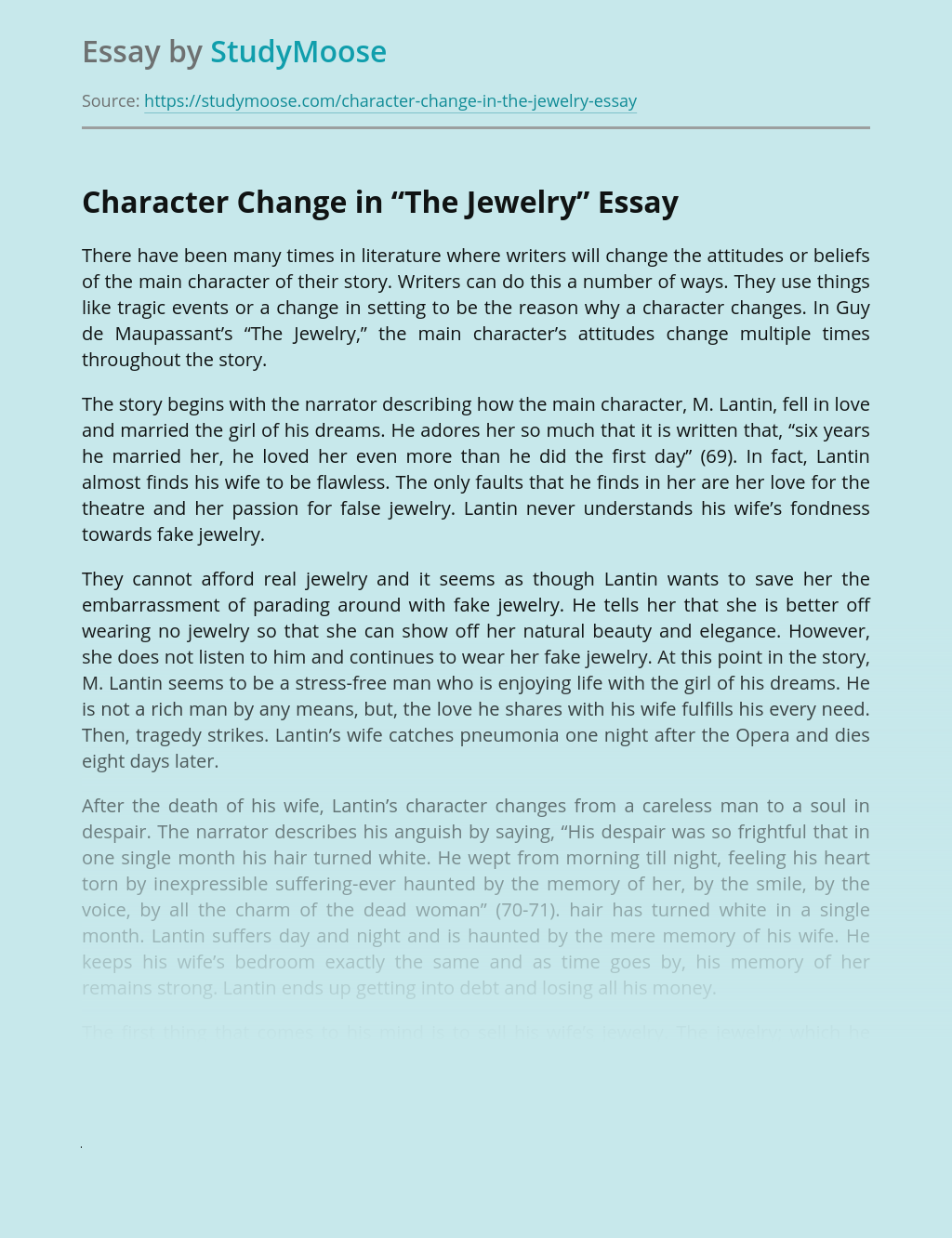 Love in the Family

Giving your children unconditional love and support is the best gift you can give; it will lead them to self confidence and a strong parent child relationship. Love, sounds simple right? Well today, many parents are too worried about school grades, drug usage, and their own personal problems that they are forgetting to give there...

A relationship between a parent and a child begins the day the child is born. First, the child has many powerful gifts to offer to his parents. His unqualified love, absolute trust, emotions and thrill to discover revolves all around the parents from the day he is born. As the parent, you have many gifts...

View sample
Get Essay
"The Denial of St. Peter" by Caravaggio

The elements most abundant in this piece are that of color, light and shadow, and space. These are the primary elements most apparent, though other elements are present in the painting as well. This particular piece is not so concerned with incorporating background into telling the story, as it is blurred and somewhat distorted. The...

How Far Does the Poet Want Us to Sympathize with Miss Havisham? The poet wants us to sympathized Miss Havisham greatly, but not entirely. Her own trappings of her strong need to revenge and her morbid existence that has destroyed her carries a symbolic meaning of self – absorption and destruction. This poem introduces us...