Analysis of "The Piece of String" by Guy de Maupassant

The story’s two major characters are both considered as a stereotype character. Their roles were easily known as the author clearly discussed their parts and physiognomies in the story. The story’s protagonist is Maître Hauchecome. He was wrongly accused for stealing a pocketbook with five hundred francs and some business papers. Every time people saw him, they harassed him. He can also be a dynamic character. From being a simple and innocent man, he was suddenly ruined by injustice.

Don't use plagiarized sources. Get your custom essay on
“ Analysis of “The Piece of String” by Guy de Maupassant ”
Get custom paper
NEW! smart matching with writer

Minor Characters were also seen in the story. They are the mayor, Maître Authirne, tavern keeper and a horse dealer, Maître Fortune, owner of the pocketbook, and Marius Paumelle, the one who found the leather pocketbook.

These characters are all considered a flat character for they did not change all over the story.

The conflicts used by the author in the story were man vs. man and man vs. society. Man vs. man occurred when Maître Hauchecome was accused for getting the black leather pocketbook containing five hundred francs and some business papers by his enemy – Maître Malandain.

Another conflict shown was man vs. society. Being unaware, people around him still alleged him even though the husbandman at Ymanville already returned the pocketbook.

Maître Hauchecome, seated at the other end of the table, replied: “Here I am.”

And the officer resumed:

“Maître Hauchecome, will you have the goodness to accompany me to the mayor’s office? The mayor would like to talk to you.”

Discussion of the Theme

You can never be innocent once you’re accused

As rumors are easily spread nowadays, people will just judge the way they think about you without knowing the truth. No matter how you deeply explain, you will always be thought of as guilty. And whether you are already free from the indictment, it is impossible that people will rapidly forget what you had undergone. By the time Maître Hauchecome was erroneously accused of stealing just because of picking up the string, everyone thought that he was a rascal. After the accusation, people overlooked him, and even when the pocketbook was already returned.

How society can be cruel

In life, once you’re suspected, people around you will always manage to have bad thoughts about you. They easily believe in what others say and they will not care about how you will feel. In the case of Maître Hauchecome, he was wrongly alleged by his enemy of getting the pocketbook. People disbelieved him as he said that he was not the thief. And when the pocketbook was returned by a man, the society still thought that he had an accomplice who returned it.

burgh- a borough or chartered town
swerved- diverged; veered
throng- a large, densely packed crowd of people or animals
savage- fierce, violent, and uncontrolled
rheumatism- any disease marked by inflammation and pain in the joints,
muscles, or fibrous tissue exasperated- infuriated; maddened
protruded- jutted; projected
jovialness- endowed with or characterized by a hearty, joyous humor or a spirit of good-fellowship threshold- a strip of wood, metal, or stone forming the bottom of a doorway and crossed in entering a house or room. perplexed- confused; puzzled

“Their blouses, blue, “stiff-starched,” shining as if varnished, ornamented with a little design in white at the neck and wrists, puffed about their bony bodies, seemed like balloons ready to carry them off.”

“Maître Hauchecome was seized with a sort of shame to be seen thus by his enemy, picking a bit of string out of the dirt.”

“What grieved me so much was not the thing itself as the lying. There is nothing so shameful as to be placed under a cloud on account of a lie.”

“He went home ashamed and indignant, choking with anger and confusion, the more dejected that he was capable, with his Norman cunning, of doing what they had accused him of and ever boasting of it as of a good turn.”

“The next day about one o’clock in the afternoon Marius Paumelle, a hired man in the employ of Maître Breton, husbandman at Ymanville, returned the pocketbook and its contents to Maître Houlbreque of Manneville.”

“I was seen, me? Who says he saw me?”
“Monsieur Malandain, the harness maker.”
The old man remembered, understood and flushed with anger.
Flashback was presented when Maître Hauchecome tried to recall the time when Monsieur Malandain was looking at him while he was picking up the piece of string.

“In the public square of Goderville there was a crowd, a throng of human beings and animals mixed together. The horns of the cattle, the tall hats, with long nap, of the rich peasant and the headgear of the peasant women rose above the surface of the assembly. And the clamorous, shrill, screaming voices made a continuous and savage din which sometimes was dominated by the robust lungs of some countryman’s laugh or the long lowing of a cow tied to the wall of a house.”

Imagery was shown since the author was able to let the readers imagine the real place of Goderville by letting them have the visual image of it. The lines made the readers feel as if they were present in the very moment, right between the lines.

Maître Hauchecome, seated at the other end of the table, replied: “Here I am.”

And the officer resumed:

“Maître Hauchecome, will you have the goodness to accompany me to the mayor’s office? The mayor would like to talk to you.”
Suspense was seen since the author successfully let the reader question about the things will happen next. Intense feeling was also present to the readers as they wait for what will happen to Hauchecome, and as they ask why he was called by the mayor.

“Maître Hauchecome of Breaute had just arrived at Goderville, and he was directing his steps toward the public square when he perceived upon the ground a little piece of string. Maître Hauchecome, economical like a true Norman, thought that everything useful ought to be picked up, and he bent painfully, for he suffered from rheumatism. He took the bit of thin cord from the ground and began to roll it carefully”

By the time Hauchecome picked up the string, it seems like it has nothing to do with the story. But it became noteworthy towards the middle of the story because it was the reason why he was blamed for stealing as Malandain told the mayor a different story regarding the thing Hauchecome picked up.

“The women, having placed their great baskets at their feet, had taken out the poultry which lay upon the ground, tied together by the feet, with terrified eyes and scarlet crests.”

The line shows Asyndeton as the author only used comma to have continuous flow of thoughts which speeds up the rhythm of the passage, and to have more memorable ideas.

Throughout the story, eagerness was evidently seen in the character of Hauchecome. By the time he was accused because of the wrong statement said by Malandain, people around him beleaguered and disbelieved him. He was very eager to prove to the people that he was innocent. And when he knew about the returned pocketbook, he even spread it to some strangers just to verify his innocence.

This value was definitely exposed when Hauchecome, blamed for stealing the pocketbook, was suspected by the society even though they did not know the truth. Suspicion was shown by the people around him. They didn’t give Hauchecome a chance to defend his innocence, instead they criticized him. He also experienced racism as the people say bad comments to him.

“You shall not go around as a slanderer among your people, and you shall not stand up against the life of your neighbor: I am the Lord.” -Leviticus 19:16

Connecting to the verse, we should know how to love others, as we are called sons of God. We shouldn’t accuse others for the sins they have committed because we do not know what their reasons really are. Overpowering to people can already cause us to commit sin.

In our society, we constantly hear people around us talking about another person. Judging them immediately the way they act. Especially to teenagers, they criticize persons they do not like. They do not know that what they are doing is already considered as an iniquity. Furthermore, we can notice that injustice is often happening in our country. Some delinquents are not being punished by the law just because they have the authority and definitely, the money.

In summary, we should learn to accept the weakness of others and we must not take advantage of it. Finally, we should not be the reason for the downfall of others.

Is Hauchecome more of an ignorant or an innocent man? Why?

In my opinion, Hauchecome is more of an ignorant man. He just went to Goderville without knowing that he will be able to meet his misfortune there. He was also ignorant in the case he was suspected even though he was not the one who stole the pocketbook. He was unaware that his enemy already disgraced him. And by the time the pocketbook was returned, people in his surroundings still talked behind his back negatively.

Who do you think should be blamed for the death of Hauchecome? He, himself or the society? Why?

For me, both he and the society should be blamed for his death. He, himself should be blamed since he let the people around him affect him. He should have ignored them for he knew to himself that he was innocent. He wasn’t able to remain strong when people tried to accuse him.

Moreover, society should also be responsible for his death as they were the reason for the weakness of Hauchecome. They kept on saying bad ideas to him which made him feebler and made him feel not to fight anymore.

How does the story mirror the problem of social injustice-its victim and its proliferators?

Appertaining to the story, Hauchecome was blamed for the crime he did not do. People easily judged him even though they did not know the truth. Towards the end of the story, he was still not given any justice.

This mirrors the problem of the society wherein justice is not being reasonable. Some criminals are away from penalties, while the innocent people are being punished and are becoming the victims. People easily believe in rumors and give accusations immediately without asking for the real story.

Analysis of "The Piece of String" by Guy de Maupassant. (2016, May 14). Retrieved from https://studymoose.com/the-piece-of-string-by-guy-de-maupassant-essay 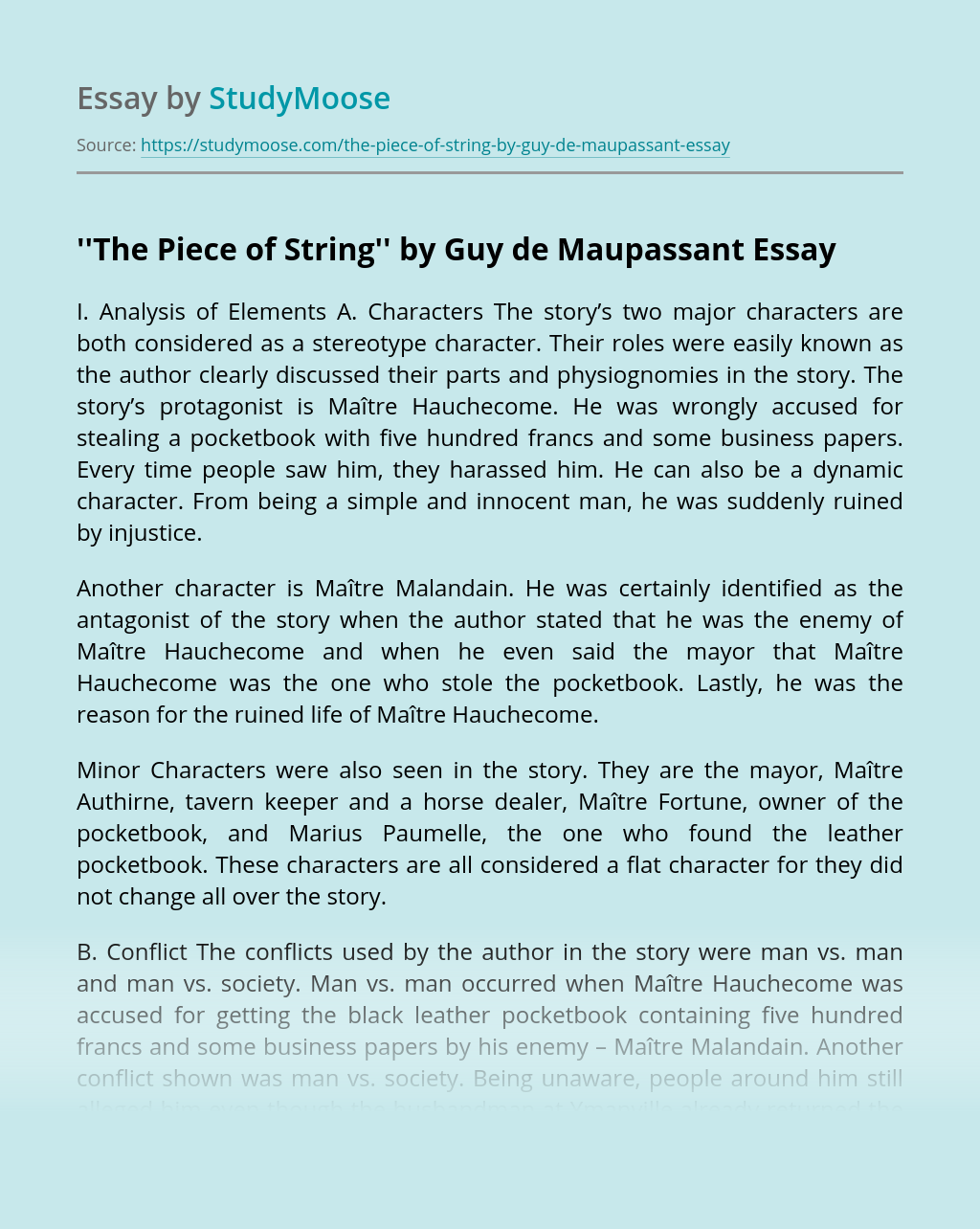