Today I’m going to share some information that might be mind-boggling on gun violence and control. Specifically, I will discuss our current gun right issues that we have with gun violence and why we need to start generating ideas toward a solution.

We have a serious issue on our hands. Every day 32 Americans are killed by a gun. The news reports frequently on a shooter that walked into some sort of building and started shooting while the people inside were helpless.

Don't use plagiarized sources. Get your custom essay on
“ Gun Violence and Control ”
Get custom paper
NEW! smart matching with writer

Today I will discuss some of the unbelievable statistics and a few interesting ways of looking at gun control.

To start off, I will discuss the current problem we have. A recent example of a need for a gun control law happened in a school in Ohio. A frustrated student took his grandfather’s gun and killed three students at his school. He was able to get to this gun because it easy to get ahold of as it was not locked in any way.

Keeping the gun locked up was not a law so there were no laws broken, but if there had been it may not have happened.

That is setting our children up for fear and possible disaster. Parents live in worry that their child will be involved in a school shooting and schools are constantly trying to secure the grounds to prevent being victims and the next school on the news. Also in Ohio, an eleven-year-old girl was shot and killed by straight bullet near a school.

This is starting to be very common.

Controlling the safety regulations for gun owners must happen. Gun control is really only the government making protective rules that gun owners have to abide by. This will prevent some of the issues by just adding a few simple laws that don’t affect the gun owner in a negative way.

The Brady Campaign is an organization created after a man protecting President Reagan was shot. A man named Colin Goddard, who works for the Brady Campaign, is a survivor of the Virginia Tech shooting that killed 32 people. He said this while being interviewed by MSDN about the Chardon High School shooting:

8 kids die every day from gunfire.

You have 32 Americans that die every day. That is equal to the amount of people killed in the Virginia Tech shootings. Except that the Virginia shootings happened once and 32 still die each day.

In his interview, he tries to point out how the accessibility to guns is so easy and so dangerous. Now, the University of Arizona is trying to pass a bill that allows students to carry firearms on campus. To some this looks like a form of protection, but to others it seems dangerous because college students are under pressure, often drink and are more likely to use the weapon due to poor mental health.

Here Are Some Shocking Statistics

A prison survey was conducted and state prison inmates claim that those possessing a gun the source of the gun was from a family friend street by or illegal source. The math on that shows that 80% of the inmates that used a gun in their crime got it illegally.

The Journal of Quantitative Criminology, showed data from a study that US civilians use guns to defend themselves and others from crime about 989,883 times per year. The risk of getting killed because they also had a gun goes up. The chance of being killed goes up if you also are holding a gun.

Guns are responsible for killing more teens and young adults than people of other ages. The ease of access to weapons is the reason.

Every time one of these shootings makes the news, groups that are concerned will come out speaking about these statistics, but then you never see changes.

The Brady Campaign is pretty well known for its attempts to increase gun control. On the Brady campaign’s website, you can find the state-by-state information on gun laws. They are not the only ones fighting for better laws. Families that lose their loved ones to gun violence create awareness, but it doesn’t seem to get very far. They have too much competition from the gun owners that worry their rights are being violated. 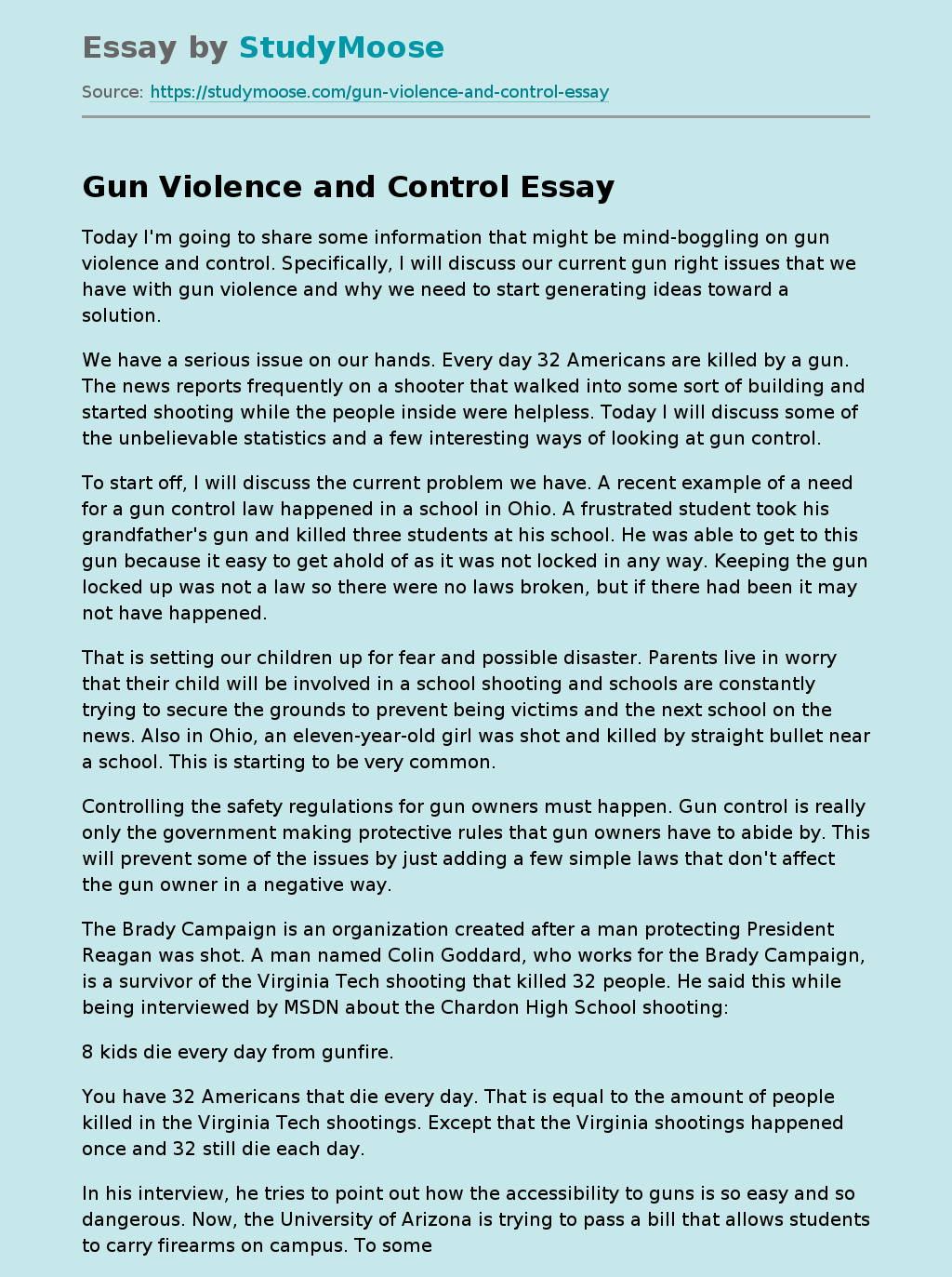