Gun violence in Louisiana has spun out of control the last few years, passing other states and taking the lead in highest firearm deaths in the U.S. Louisiana hasn’t had a “good year” since 2011 with a low of 865 firearm deaths that year, compared to Louisiana’s nearly 4.6 million residents. Louisiana has been in and out of being the state with the highest murder rate since about 2000. Gun violence is a problem all around the world but seems to stick with Louisiana pretty hard.

Don't use plagiarized sources. Get your custom essay on
“ Gun Violence in Louisiana ”
Get custom paper
NEW! smart matching with writer

If the state itself, and the people that reside in it would help to push these laws, then maybe one-day gun violence will drop to almost nothing. Gun laws and permits are very lenient in Louisiana when it comes to owning and carrying a gun. In Louisiana, you do not have to a permit or license to purchase a firearm. Under certain circumstances, seven-teen-year-olds are allowed to open carry. A simple background check is done, but as far as a federal background check comes, they are not required.

These gun laws are found as preemption laws because they are pushed to be changed every day. I agree with the right to bear arms unless that individual is not fit for a firearm. Eventually, the only way the state is going to be able to fix the illegal gun problem is to modify our current gun laws. In Louisiana, the only permit you need for a firearm is when you carry it publicly and conceal it. No permit is required to buy a firearm in our state unless it is fully automatic.

In Louisiana, it is even legal to open carry your firearm. It is completely legal as long as your firearm is showing and everyone can see it. Louisiana has always been in and out of the position of being the state with the most homicides or even firearm homicides. Since 1999, over twenty-six thousand teens and children in Louisiana have died because of firearms. It is also proved that the firearm murder rate goes up fifty-percent every year. Guns are also too easy for minors to get their hands on.

Most of the children and teen deaths are done by another child or teen that has access to a firearm. Baton Rouge is widely known through the state for being state capital but also being murder capital. A gun is even allowed to be carried on a college campus in Louisiana as long as its legal and it has to be concealed with proof of a permit. Baton Rouges murder rate has gone up at least ten percent a year for the last five years. 2017 was by far the worst year yet for Baton Rouge because they almost caught up with Chicago’s murder rate by firearms that year. And everyone knows that is not an easy task, noting that Chicago has record-breaking numbers almost every year when it comes to murder and violence. In 2017, East Baton Rouge Parish had a record high of one-hundred and six killings due to firearms that year. The record was broken in 2017, topping 2007’s record of 96 firearm deaths. The year of 2017 actually went up seventy-percent from 2016’s year having only sixty-two firearm deaths. Someone is killed almost every week in Baton Rouge, La due to firearm outrage and weak laws.

New Orleans firearm murder rate is almost sixty people for every one-hundred thousand people. In the year 2011, New Orleans had the highest firearm death rate than any other city in the United States. New Orleans is also 4th in the nation for highest firearm deaths right now. In the year of 2017, one in every five people murdered was a child and that’s not counting accidental shootings that took the lives of children. New Orleans has come a long way from what it used to be when it comes to murder and gun violence. But that doesn’t mean it can’t be made an even better place. Even though 2018 was a slightly good year for New Orleans with that year having the lowest amount of firearm deaths in nearly a century, the gun violence has not settled down. Someone loses their life almost every day in New Orleans, LA. People of all ages and professions could be a target of violence. It is so out of control, you never know who could be next. Even the rate for non-fatal shootings is sky high almost every year along with the murder rate. Fatalities of gun violence to children are mostly due to the availability of firearms in the state. Not to mention that we are almost best known for our weak gun laws.

Statics shows that when “gun control” was tried in places like Chicago and Washington D.C., it had absolutely no effect on bringing down crime and murder rates. From 2013 to 2016, the child murder rate for the entire United States increased by a whole thirty-percent. Data also shows that firearm homicides among the other children were most likely persuaded by other crimes. In 2010, Louisiana had the worst murder by firearm rate in the nation. That’s almost ten people dead for every hundred thousand people. That’s more than two and a half times higher than the average. From 2001 to 2010, Louisiana held the record for more gun deaths per capita than any other state. It is found that a firearm takes the life of a Louisiana resident every ten hours. Among those people that die every ten hours, four of them are estimated to be women and children. It is also good to realize that some states that have strong gun laws still have high firearm murder rates. It is found that gun control revolves around limited gun laws depending on the state because low gun violence reflects off of strong gun laws.

For example, Vermont has limited gun laws much like Louisiana, but their firearm murder rate is low. Representatives of Louisiana looks at the state as “the state that protects itself”. State officials are looking out for the safety of their own residents by allowing citizens to legally conceal and carry a firearm. But the same amount of effort is not put in to clean the streets of illegal weapons. From the year 2005 to the year 2014, nine-thousand four-hundred and forty-eight people died to do to illegal firearm violence. In the year of 2014, that rate placed Louisiana as 13th highest in the nation. And Louisiana also places 6th highest in the rate of other violent crimes and we have the 3rd highest poverty rate. It is also proven that states with high levels of gun violence are often the poorest states in the country. Louisiana is considered in that range of states. Unintentional firearm deaths and suicides have greater numbers than people actually think.

The suicide rate by firearm in Louisiana has grown more than thirty-percent since 1999. Most unintentional deaths by gun are caused by kids playing with guns, or guns being left around and unsupervised. There are even cases when cops have fatally killed a juvenile for mistakenly thinking they had a gun. Cop shootings have even involved older people in fatal shootings. The availability of firearms has a big impact on gun violence. If laws were tightened and parishes and neighborhoods weren’t so lenient on crimes, maybe gun control would be easier to grasp. The youth pass up help these days because they don’t want to be different. If everyone wanted to change at the same time, then most likely gun control wouldn’t even be an issue. At the end of the day, gun violence stems from the government itself. 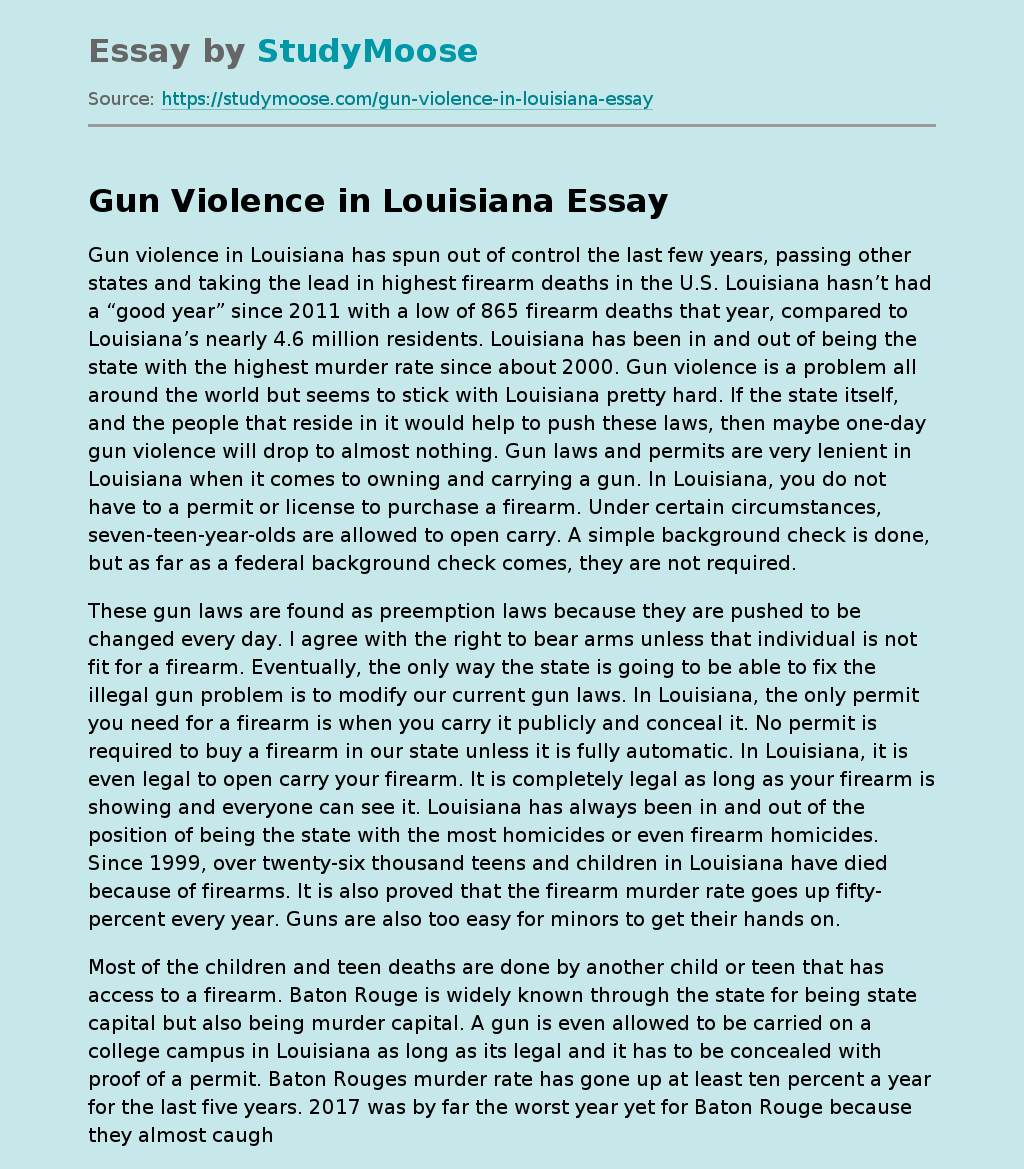