To the attention of the President of the United States, Donald Trump Key highlights Since 1970, there are more than 1300 school shooting incidents in the U.S. Since 2009, at least 177 schools in U.S experienced a shooting. Within the last ten years, school shootings are significantly increasing and happening more often. Over the past decade, there have been at least 180 school shootings with 356 victims across the US. In 2012, a school shooting happened in Sandy Hook Elementary School was the deadliest mass school shooting in US history with 20 children at first grade and 6 adults.

Don't use plagiarized sources. Get your custom essay on
“ Gun Control Policy For School Safety Of American Students ”
Get custom paper
NEW! smart matching with writer

2018 was the highest with 94 recorded incidents and 55 of victims killed including the shooters.

The issue of school shootings has been a matter of great concern in the United States. The issue first caught the attention of media after the horrific school shooting and murders in Sandy Hook Elementary School in Newtown, Connecticut in December, 2012. As can be seen from the chart below, the US has witnessed a series of mass school shootings in recent decades.

Proficient in: Gun Control In America

According to the data from the US Naval Postgraduate School, there were 94 school shooting incidents in 2018 which is a highest record since 1970 which is nearly double higher than the previous record in 2006. In addition to numeric incidents, each year is recorded with a number of killed including shooters. The graph below shows a number of victims killed each year. It is obviously seen that 2018 was also the worst year with 55 people including the shooter killed in school gun violence.

School shooting causes many challenges that school have to face.

According to Dikel (2012), schools are educational rather than clinical settings and are not authorized to provide treatment services. Schools cannot obtain malpractice coverage, putting them at great risk for liability. Moreover, it is hard for parents to recognize that their children suffer from a mental problem, or they do not want their children to take medication if they are diagnosed. Further, there is a substantial lack of funding and a shortage of school counselors, exacerbating the issue of school violence (National Education Association, 2014), as students may not be receiving the mental health support that they desperately need.

Adverse Effects of the Current Laws

Gun laws in the US are exceptionally weak. The Second Amendment to the U.S. Constitution (1791) stated that ‘a well regulated Militia, being necessary to the security of a free State, the right of the people to keep and bear Arms, shall not be infringed.’ In other developed countries, one or even more background checks are very strictly required to get a gun, such as specific training courses, rules to use firearms, more difficult licensing requirements, and specific justifications. Unlike in the US, it is easy to get a gun with simply very few barriers, even not required a basic background check.

America has a ton of guns. It has much more than other nations, not just developed countries but any other country. From the data in the graph below, it is estimated that the number of civilian-owned gun in the US was 120.5 guns per 100 residents in 2017 which means that there were more guns owned than the number of people. Furthermore, the chart also displayed that there were 4 gun homicides per 100, 000 people (2016). It is indicated that America has a much higher gun homicide rate overall compared to other nations. These factors made it easy for people with violent intent to own a firearm which will allow them to commit a terrific shooting. However, the right is not unlimited. Some firearms restrictions have been sustained by the U.S. Supreme Court like bans on hidden weapons and on the ownership of certain types of weapons, as well as forbiddances against the sale of guns to particular categories of people.

The Gun Control Act of 1968 requires a background check and bans individuals who are under eighteen, convicted criminals, mentally disabled, military discharge personnel on purchasing guns. However, ‘as of 2019, there were no federal laws banning semiautomatic assault weapons, military-style .50 caliber rifles, handguns, or large-capacity magazines.’ There was a federal prohibition between 1994 and 2004, but these restrictions were allowed to expire by the Congress. After the deadliest school shooting happening in Newtown, Florida state legislators banned on fire stocks, and 21 years old was the minimum age that people can buy a gun. However, any major new federal restrictions were failed to enact. Stakeholder Analysis Policy recommendation and expected benefits.

Gun Control Policy For School Safety Of American Students. (2020, May 08). Retrieved from http://studymoose.com/gun-control-policy-for-school-safety-of-american-students-essay 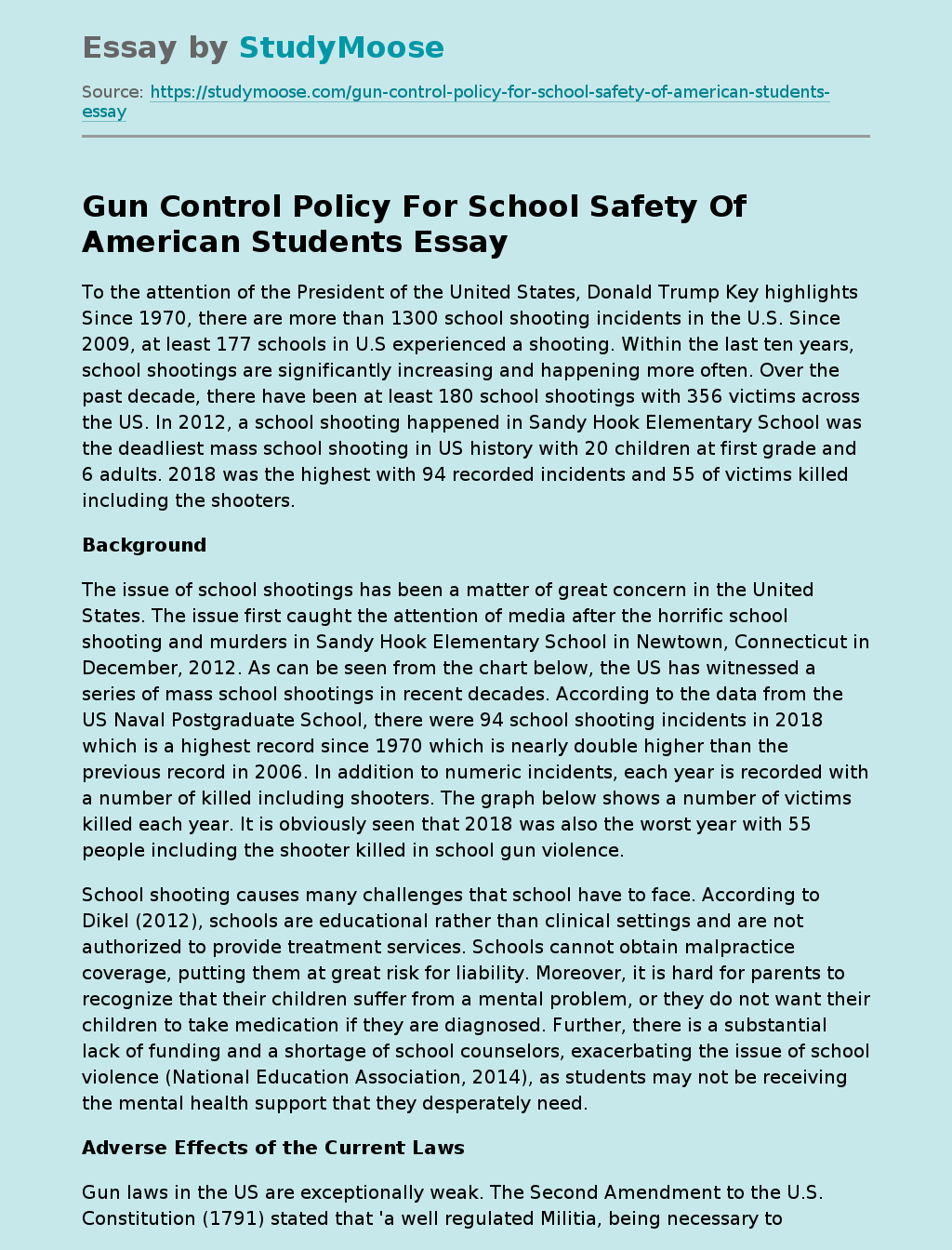