Grant And Lee: A Study In Contrasts

In recent years, there has been enough thesis studying General Grant and General Lee in contrasts. No wonder, because they are some of the most iconic figures in the new history of the United States. Both became military under the pressure of family circumstances. Both were outstanding participants in the Civil war. But the memory of Ulysses Grant is passed on from generation to generation while tombstones to Robert Lee are now threatened with demolition. Let us turn to comparison and study in contrasts lives of Bruce Catton Grant and Robert Lee.

Don't use plagiarized sources.
Get Your Custom Essay on Grant And Lee: A Study In Contrasts Just from $13,9/Page

Ulysses C. Grant was born on April 27, 1822, in Point Pleasant, Ohio. Already at an early age, the young general was helping his father on the farm. After visiting a lot of private schools, his father decided that he should make a soldier career. Thanks to the petition of Congressman Thomas L. Hemmer, Grant was admitted to the military academy in West Point, New York. Grant obeyed his father’s wishes, not experiencing much enthusiasm for the servicemen.

In 1843, he received the patent of an officer and started serving in the 4th Infantry Regiment of the United States. By the time of war against Mexico (1846-48), comrades’ remarks about the excessive use of alcohol by Grant belong. After numerous warnings from his superiors, he resigned in the summer of 1854.

Although his wife’s family had slaves, he found as right thing to fight on the side of the union. Soon Grant for his success in the military field was appointed general of the brigade. After under his command the Confederates from Kentucky were forced out, Lincoln conferred on him the rank of Major-General. Grant was distinguished by logic, calculation, and perseverance in conducting military operations, and his troops showed a high fighting morale. After the Civil War, Grant retained the main command of the US Army. In 1866, Congress conferred on him the rank of general.

It was the war that gave Grant his place in life. Being a War Minister, he has accumulated extensive management experience, although he was repeatedly reproached for incompetence required for the highest state office. In the presidency, general saw an opportunity to maintain a war victory by restoring the political unity of the state and guaranteeing civil rights.

Grant won elections in 1868 thanks to the program that promised reconstruction of the South, suffrage for liberated slaves and economic recovery of the southern states. But general in choosing ministers and advisers relied chiefly on the persons he knew the height of service. Promising much, Grant, however, was satisfied with the small. During his second term, no measures were taken to resolve social and political problems between races, so conservative forces in the South gained the upper hand. Also, a general refused his initial striving to reform the cabinet of officials, has managed to provide posts only to his closest friends.

The extent of corruption and bribery cases surpassed all previously known. Criticism against Grant grew. The most lasting influence was “panic of 1873” when banks were closed, and the timid efforts of the ministry could not improve sad situation. Mismanagement, embezzlement and large speculation accelerated economic downturn. After the end of the presidential term, Grant departed from politics. The hero of the Civil War died on July 23, 1885, in New York.

Despite military successes, in the history of the US, General Grant refers to weak presidents. He was considered as a passive politician who followed the directions of Congress, instead of implementing his own ideas. Venality represents his government in an unfavorable light.

His policy towards the southern states is often assessed as half-hearted, as Grant nevertheless tried to protect the civil rights of the black population. One gets an impression that he perceived his presidency as a kind of vestibule to political rest. In combination with naiveté, such attitude created a danger of manipulation. Therefore, a general didn’t justify the hopes that were placed on him.

Robert Edward Lee was born in 1807, in Stradford, Virginia. As his father soon had serious financial problems, in fact, mother raised the future general. If Grant’s fate was determined by his father, then Robert Lee’s life path was connected with economic difficulties. The only way out in similar situation was to enter the famous military academy West Point.

Robert Lee, who was not only diligence in his studies but also a great physical force, could become an ideal officer in the American army. And he became it. While studying at the academy, Lee was one of the best Cadets, not having received a single penalty from a higher command. After finishing he was assigned to engineering troops.

But the career of a war engineer did not give the desired advancement in titles. In addition, service in the outback was burdened by an officer who could not fully engage in his family. In the end, Robert managed to achieve transfer to cavalry. By this time he was already 48 years old. In 1861, Abraham Lincoln invited Colonel Lee to lead the land forces of federal government, as conditions in the Southern States heated up to the limit. Herewith, Robert was regarded as a convinced opponent of slavery. However, being a native of the South, a colonel wrote a petition for resignation, stressing that he was not able to participate in the invasion of his homeland.

The general, who is seen as a symbol of militant slave-owners, for many years kept a large family for modest state salaries, and acquired slaves, only obtaining an inheritance at the age of 50 years. While the commander of the army of the North, General Ulysses Grant was a slaveholder. His “laborers” were freed only after the amendment to the Constitution abolishing slavery came into force in 1865.

Colonel Lee turned to Jefferson Davis, the president of the Confederation, and offered him his services as a soldier. So, Robert rose to the general’s epaulets, engaged in the creation of a regular army of the southern states. Lee participated in the planning of numerous military operations and then headed the Army of Northern Virginia.

Commanded by general, the troops achieved impressive success. Yielding to the northerners in the strength and preparedness, Lee defeated them after defeat. His name has turned into a nightmare for his enemies. Robert Lee enjoyed great respect from the opponents. In particular, Ulysses Grant called him “Ace Peak”. But in 1865 Lee’s army was forced to capitulate.

The federal government amnestied Robert Lee. He died in 1870, until the end of his life engaged in the organization of assistance to former soldiers of the Confederation. For a long time, merits of General Lee were recognized by a lot of US patriots, regardless of political beliefs. The situation began to change not so long ago when in America there was a “left-liberal” coup, expressed on a symbolic level in a rigid refusal of memory of all representatives of the Confederation.

Thus, as we can see, General Grant and General Lee study in contrasts summary show that they were in the best light only in the military field. Of course, Ulysses proved to be luckier than Robert. But, as we know, the truth is always on the side of the winners. Lee’s reluctance to fight against the southern states testifies to his high moral qualities. After all, he did not advocate the extension of slavery, but for the independence of the South. Whereas Grant refers to the type of people who try to transfer their successes from one sphere to another, without sufficient knowledge and skills. In this regard, General Lee is more honest, because he was engaged in one thing, not pretending to be a connoisseur of politics.

Grant And Lee: A Study In Contrasts. (2016, Jul 15). Retrieved from https://studymoose.com/grant-and-lee-a-study-in-contrasts-essay 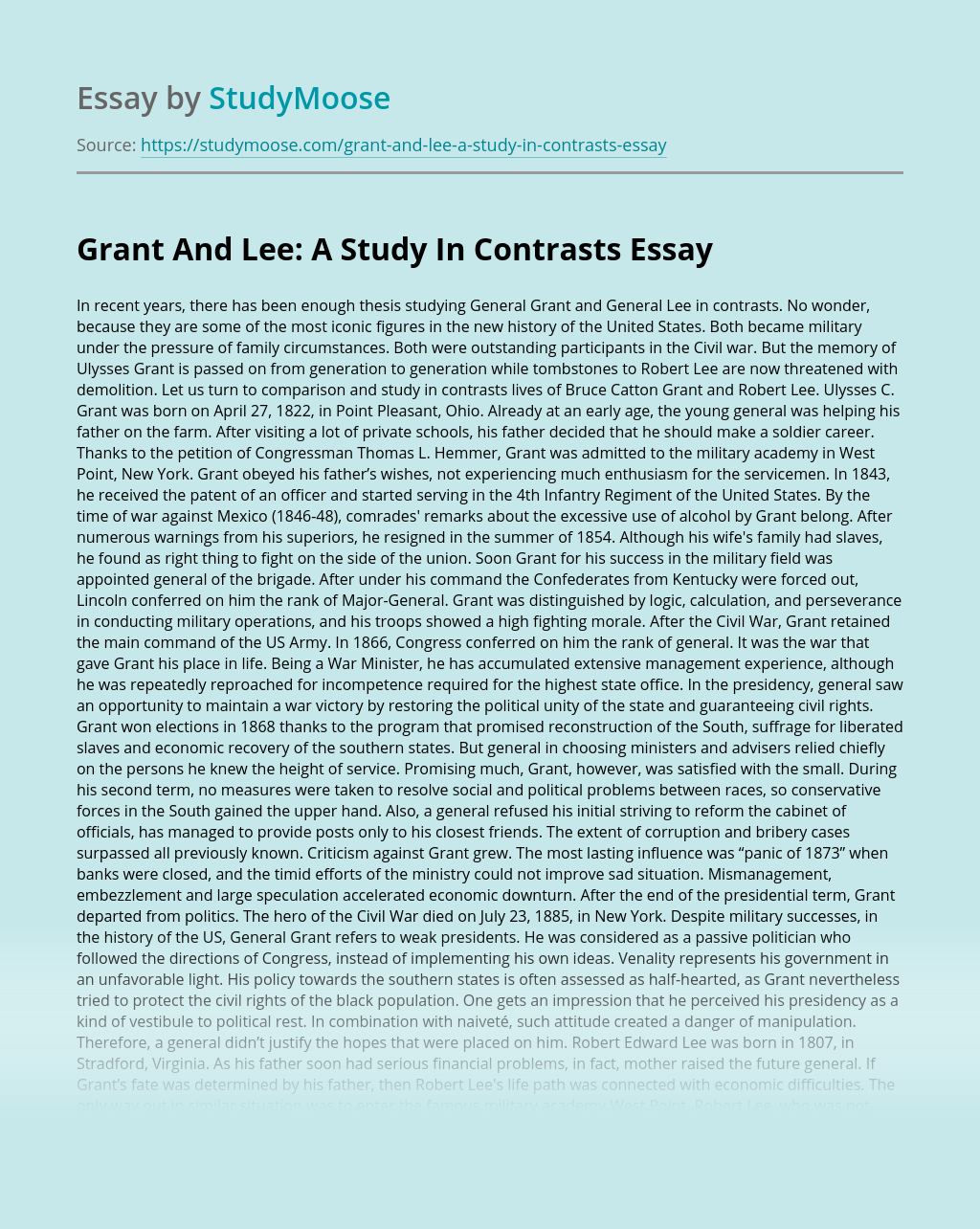 A country is just like an onion; the innermost skin is Culture. Culture is like the soul of a country. All countries have their own unique cultures to live by, which means that people who have grown up in different places will have different ways of behaving, different ways of thinking about things and different...

A Lesson Before Dying “If We Must Die” by Claude Mckay

In the passages “If We Must Die” by Claude McKay, the speaker set a courageous tone by using words like “brave”, “fighting”, and “honor” in sentences throughout the passage to show that the men were not afraid although they were outnumbered. This work of literature teaches the reader that if a group of people can...

Contrast and Similarities between Beowulf and “Beowulf” Beowulf, an epic written down in the year 1060 by the Beowulf Poet, is the epitome of what true writing is, defining the standard of the epic itself. The more modern film of “Beowulf”, produced in 2007, is an attempt to do justice to the Beowulf Poet’s masterpiece....

There are a lot of books nowadays about the characters of men and women. One of them is“Men Are from Mars, Women Are from Venus” by John Gray was a bestseller of 2012. I haven’t read this book but I’m going to share with you my thoughts about why men and women are different and...

The Boy In The Striped Pyjamas is a story that was based around the time of the Holocaust. Throughout the novel, a series of events leads to a German boy making an unlikely friendship with a Hewish boy. Firstly, the ability of Bruno and Shmuel to support each other’s needs plays a significant role in...