Going to war with Mexico was Justified Essay

Can’t decide if the United States going to war with Mexico was justified or not justified? It can be a struggle to decide. Mexico won its independence from Spain in the nineteenth century. Spain controlled most of Central America. Due to the extremely low population for such territorial extension, Mexico relaxed its immigration policies, as a result, allowing American settlers to help populate the northern territories. Their conditions to settle were self-explanatory. Now what do think? The United States was justified in going to war with Mexico.

Don't use plagiarized sources.
Get Your Custom Essay on Going to war with Mexico was Justified Just from $13,9/Page

The United States was justified in going to war with Mexico because, of the Manifest Destiny, Mexico robbed the United States citizens, and the U.S. wanted to extend slavery and land. One reason the Mexican war was justified was because of the Manifest Destiny. (Doc A) When we’re welcoming Mexicans into the Texas territory, they’re keeping the U.S. from expanding. America needs land because of our massive population. Mexico’s government is so deprived that they can’t keep California.

If Mexico can’t afford California, how will they even afford Texas? America will eventually have California, but that’s not enough for our evolution population. This evidence shows the U.S. was justified in going to war because Mexico can’t control the land they already have; America has more population than Mexico, the U.S. should have more land. A second reason the Mexican War was justified was an invasion that Mexico has passed the boundary of the U.S. (Doc B) James Polk, an American Political wrote to the Senate and House of Representatives that was a war message from the President. James informed the Senate & House of Representatives to order an efficient military to take position on the Rio Grande to meet a threatened invasion of Texas by the Mexican forces. Mexican troops were preparing to cross the river.

This evidence shows the U.S. was justified in going to war with Mexico because Mexico had killed and injured sixteen Americans, also, Mexico had passed the boundary of the United States , invaded our their territory, and shed American blood upon the American soil. A third reason the Mexican War was justified was an invasion robbery. (Doc D) Charles Sumner, an American political and young state legislator from Massachusetts who later served twenty-four years in the U.S. While citizens from the U.S. moved into Texas to prove that it needs to be a part of the U.S., Mexico robbed them. Mexico and the U.S. both wanted Texas, but instead, the U.S. moved without letting Mexico know; therefore they robbed the citizens of the United States.

This evidence shows the U.S. was justified in going to war with Mexico because they did something so immature, only the Mexicans would do it. The United States in going to war with Mexico was justified. Many of those have died trying to receive the land of Texas. (Doc A) America should have more land because of our growing population, meanwhile, Mexico doesn’t even half nearly as the occupants that the U.S. has. It’s significant that the U.S. was justified or not in going to war with Mexico because one of them will have Texas. It’s important today because Texas enlarged one-third of the United States nation. Plus, if Mexican had won “The Mexican War”, the United States would’ve been less powerful than it is today. {http://voices.yahoo.com/the-significance-mexican-american-war-285493.html}

Going to war with Mexico was Justified. (2016, Apr 10). Retrieved from https://studymoose.com/going-to-war-with-mexico-was-justified-essay 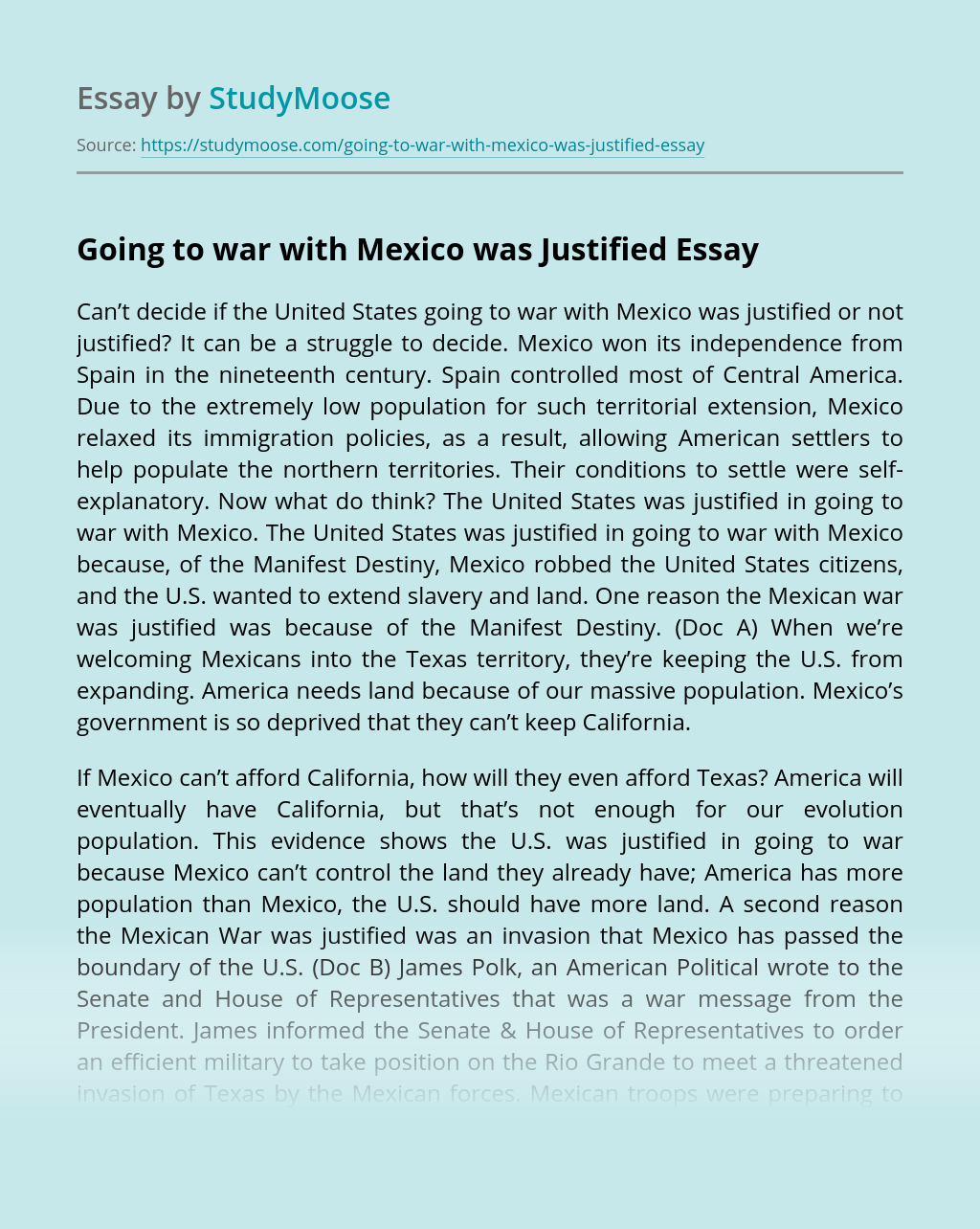 Juan De Oñate was a famous Mexican explorer, “colonial governor of the New Spain province of New Mexico, and founder of various settlements in the present day American Southwest” (Shi & Mayer, 2010). Juan De Oñate struggled to gain support for his explorations due to his birth background as a criollo. King Phillip II was... VIEW ESSAY

View sample
Women of The Underdogs

Mariano Azuela’s novel, The Underdogs, is a male-dominated novel. The story of the exploits and wartime adventures of a rebel band during the Mexican Revolution is primarily driven by men; the majority of the characters are men who are separated from their families and lives and who are fighting for a cause in which they... VIEW ESSAY

“Legal Alien,” a collection from “Chants,” is a short free versed poem written by Pat Mora. The poem explores the lives of Mexican-Americans and the cultural tension they have to face. The poet discusses a bi-cultural person whose parents are from Mexico but the person was born and raised in America and is an American... VIEW ESSAY

Mexican Independence Day is a major celebration in Mexico. It is bigger than Cinco de Mayo. The Mexican people celebrate with a fiesta, or party. The celebrating begins on September 15 (the eve of Independence Day). Crowds gather in the town meeting places of each city, town and village. There are many decorations that are... VIEW ESSAY

Over the last century, the population of Mexico City has been increasing rapidly. The population has almost double in size every ten years in the last few decades. There are about ten thousand people per square kilometre and there are over three million registered vehicles in Mexico City. During the war years, there was an... VIEW ESSAY