Geographic boarders of nation states become less relevant as beliefs, traditions, and customs permeate and are accepted, practiced, and implemented across various societies and cultural arenas. Globalism deals with issues on a geopolitical scope and scale, in which the influence of one culture effects, directly or indirectly, affects the dynamic of other cultures or societies. The evolution of communication and travel has brought down the logistical barriers, once imposed by these forms of communication. Globalizations effects give our collective existence a new perspective and sheds light on both the positive and negative implications of individual and collective actions.

Sociologists and governments can no longer ignore smaller or what they deemed to be insignificant components in the framework of globalization. A prime example, as illustrated in the text, is the international trade and commerce. If we Americans analyzed everything we own or buy, we would probably realize that >50 percent of these material goods are produced in other areas of the world.

Everyone’s life is influenced by everyone else. Globalization of mass media has had a dramatic influence on in many cultures. One need not visit or live in a certain part of the world to emulate or adopt styles, behaviors, or traditions of another culture. The stronger the global ties becomes between various cultures the more interdependent they become.

The first example covered in the text, with regards to globalization, is coffee production and consumption. We as Americans consume 1/5 of the world’s production of coffee.

Coffee is the centerpiece of many social settings and gatherings. It is incorporated into our daily activities as commonly as we brush our teeth in the morning. This commodity is usually produced in some of the poorest countries in the world. The people of these countries can be directly dependent on the benefits derived from the sale of the coffee bean. If we as Americans decided to drink more water and less coffee we could directly impact the livelihoods of thousands of people. The small example elucidates the dramatic potential effects of globalization.

The cross cultural availability of music, movies, books, and other forms of entertainment has had dramatic effects on many societies and cultures. Artists from different countries can collaborate through many means of communications; internet, satellite feeds, etc. to produce music that has an international blend or flair. This new music can influence moods and behaviors. Stimulation from sales can effectively change an individual’s financial situation, which could change their whole social dynamic.

Globalism and International Tourism and Travel

Many years ago the majority of people traveled of necessity and not recreation, because of the related expense, hassle, and danger involved. With the modernization of travel people can virtually come and go as they please. Traveling brings about the socialization and societal interaction. Friendships, business, and familial alliances can be the result. This facet of globalization can have dramatic economic influences, which can change people’s lives dramatically. Travel brings people together. The after-result of these encounters can be either positive or negative. Either way, globalization provides the medium for such changes. And the experiences can enrich a person and bring cultural awareness to the forefront.

The influences and availability of illicit drugs has been impacted by globalization. The untoward said effects of such activities are witnessed every day. Millions of dollars are spent and made, both in trying to prevent and in the sale of illegal drugs. The social costs can be equally as high. Murder, robbery, assault, and a death, can be direct or indirect consequences of such actions. These problems affect not only the people directly involved, but also affect people indirectly. If the crime in one area necessitates an increased police presence, my city taxes may go up. If my costs go up I have less to spend on things for myself, such as new shoes. The people that depend on me to buy new shoes feel the secondary economic impact of this scenario. This small process, when magnified on a grander scale, can affect thousands of people across the globe.

Throughout the text additional topics are discussed concerning and globalization and everyday life. The women’s movement, immigration, democracy, deindustrialization, and education, just a list of few, are some of the themes discussed. All of these factors play key roles in the evolution of globalization. Each helps to create changes in social interactions between individuals and entire societies. The positive and untoward effects of globalization will forever change the way in which we act and react to changes that occur in our lives as we continue to exist on a planet that is in a constant state of social flux. 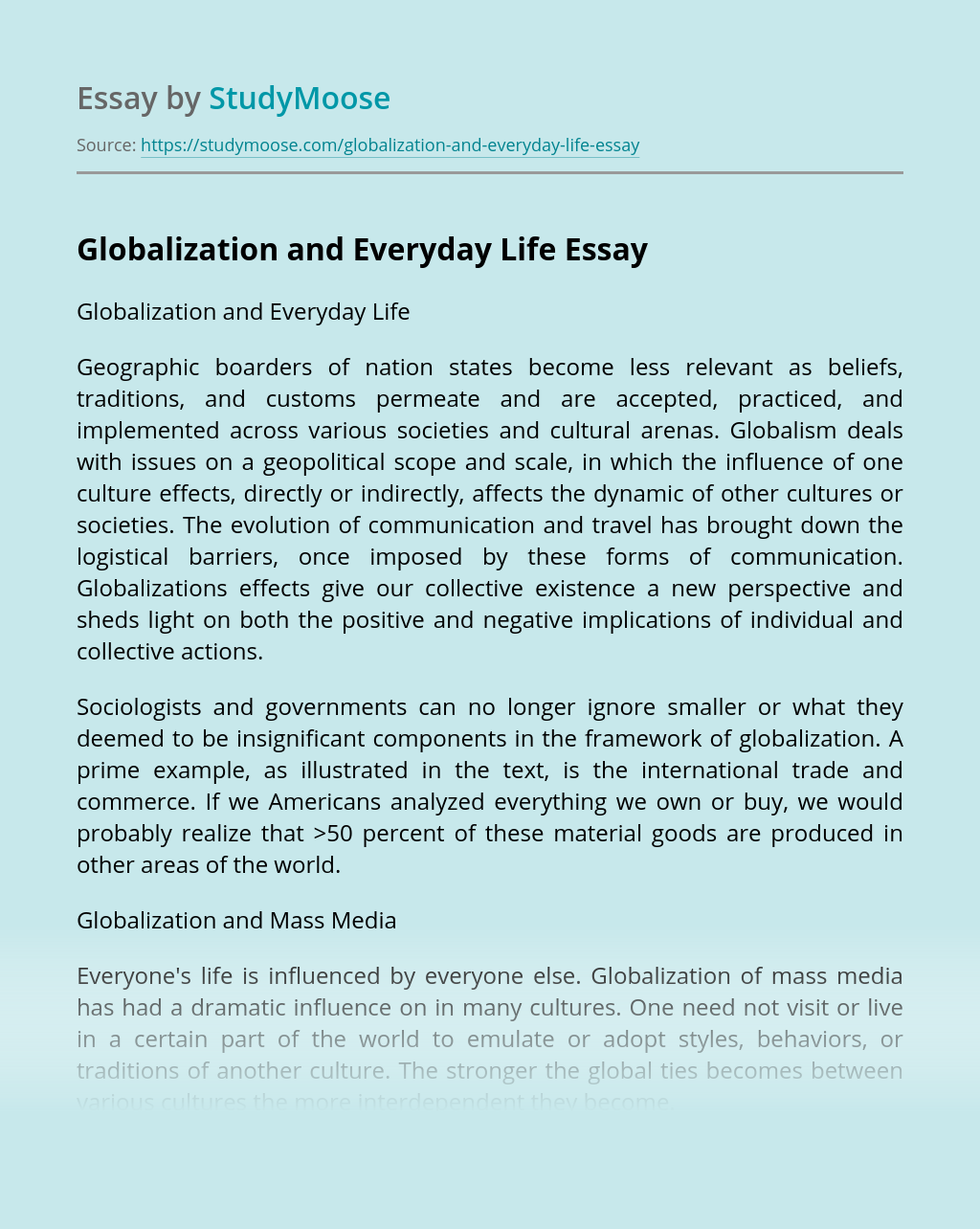 Don’t waste time
Get a verified expert to help you with Globalization and Everyday Life
Hire verified expert
$35.80 for a 2-page paper
Stay Safe, Stay Original