Culture is a way of life for people, and it helps construct the foundation for people’s values, beliefs, and choices in life. Culture makes societies unique, making it an essential element in influencing our everyday lives. As it’s carried from generation to generation, people will adapt to new technology and changes, but the principals remain the same. There is no doubt that my culture has influenced me in making almost every decision in my life so far, underlying what I’ve been taught and the values I’ve been raised with.

Don't use plagiarized sources.
Get Your Custom Essay on Culture: Influence In Everyday Life Just from $13,9/Page

It is also important to be able to recognize and respect other cultures, and not believe one’s own culture is more valuable or superior than the rest. Sometimes issues of racism occur when people are unable to connect culturally with others. Being tolerant and understanding what other cultures value is the key for successful acceptance of one another.

I was born in the California, but my parents and generation before them were all born in Mexico, which makes me Hispanic.

The principles and knowledge past down to me from a very early age begin with family and manners, and that is pretty much very universal with all Hispanic families. Having good etiquette, especially with people outside your family is very important. Being respectful of one’s surroundings and with what is not yours is part of showing others that you’re a respectful individual, and also part of being a liked individual. The general idea is to give out respect in order to receive respect back from others. I have applied that idea to every event in my life, like going to a job interview and even when arguing with somebody. Having table manners is also a part of good etiquette, which includes knowing when and how to greet people, being polite and such. Many times the whole family is judged by how just one member behaves.

Family in Hispanic cultures is very close, they have Bar B Q’s or birthday parties very often, and it’s all part of having the opportunity to see the tios, tias, or cousins that are not seen very often. Family greeting are lengthy; hugging, kissing, and touching are not uncommon, and phone contacts or visitations are very popular. Being raised with family values is an influential element not only on deciding what is best for me, but for the family also. Making decisions may involve knowing how it will affect the family; for example, peer pressure could have made me fall into drugs, but in my case, when family views are valued, drug addict was not the best label for me or the best image for family, so a different route was chosen. Always wanting the best for the family involves making the family look good and possibly helping it in the future, for me, going to college is part of it.

Religion and god has also been a part of what I’ve learned and valued. Most of the Hispanic cultures value religion to a great extent, making it a daily ritual to thank and pray to god for what we have or do not have. The culture that I’ve been exposed to has gone through many changes due to the technological advances and country differences. But the fundamentals have been passed down to me. Even though the religious practices may not be followed as strictly as prior generations, my religious believes are still greatly influenced by what I’ve seen, heard, and interacted with since I can remember.

One topic that is very controversial and has a lot to do with people’s culture has to do with how much and to what extent is life valued; for example, stem cell research and abortion. Usually people base their side of the argument with what they’ve grown up to believe in. A pregnant woman will have a hard time deciding to have an abortion when her values are impeding her to make such decisions. In the same manner, people do not see stem cell research with scientific eyes, or better yet, they just do not care.

They only see the life involved and their belief that life is a very valuable gift. Sometimes culture involves a set of rules that are universally understood and followed by the whole group. My culture does not influence me to a great extend as far as what I wear or what I eat. But other cultures, like the Amish, do have certain rules to follow making them have few choices in life. Being able to understand other cultures like the Amish, begins with knowing about the tradition, faith, and experiences of these culture groups.

The things that I like or do not like will always be affected by my culture. Whether it be food, customs, or ideas, my mentality and judgment upon them has already been set. People with no culture have a tough time getting along, yet alone having successful lives. This is simply because they do not
know right from wrong or what is expected from him or her as a worker, wife, husband, or any other societal character. Being able to embrace and accept the beliefs, norms, and values of other cultures is a must for cultural diversity to exist in any place, in this world. 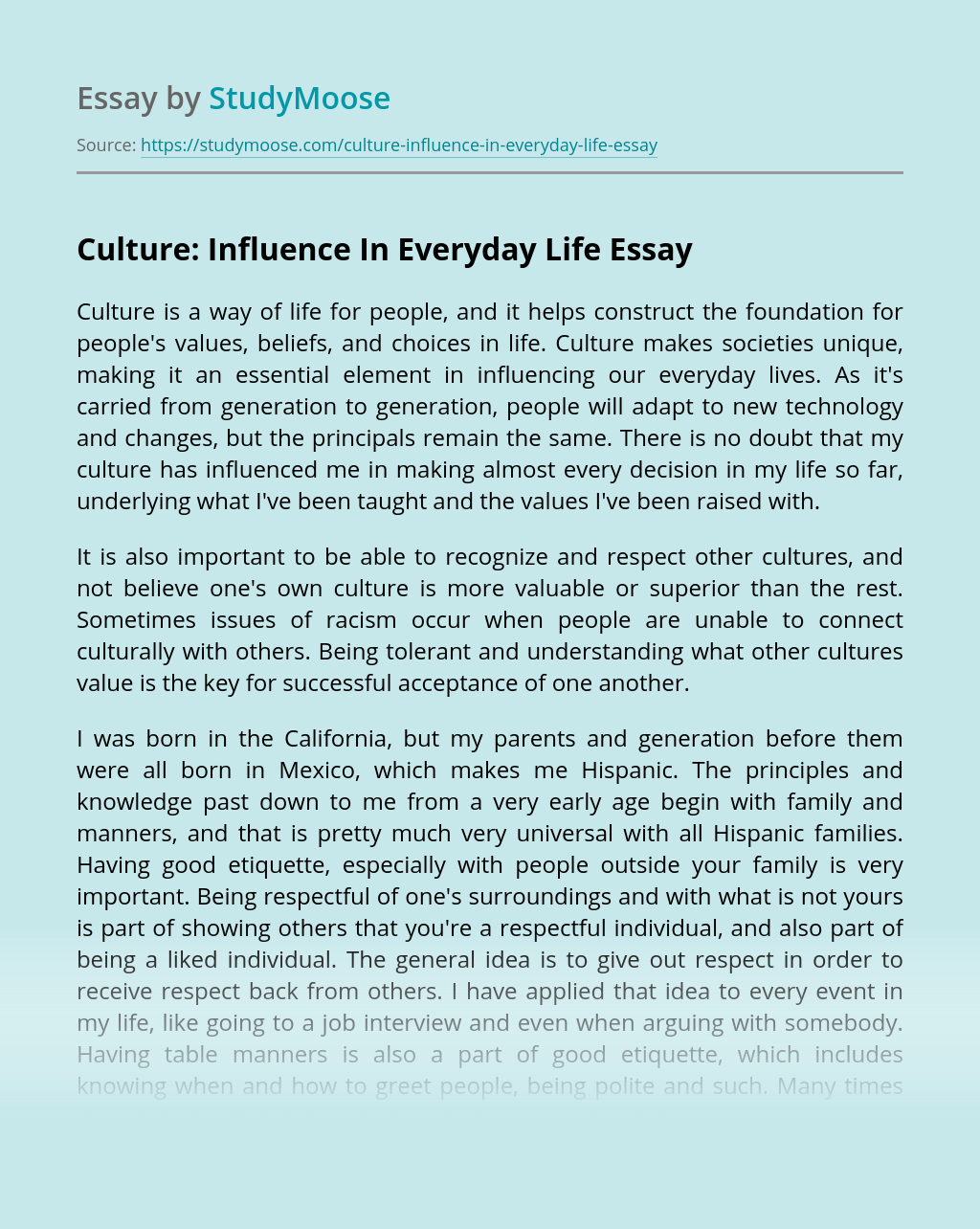