I experienced culture shock about 7 years ago, when I became friends with a Philippine woman. Her name is Christeen Humangnan; she was born and raised in the Philippines. It wasn’t until Christeen was 14 years old, that she moved to the United States. She would tell me how spoiled we are as Americans. She lived in the Philippines without electricity, a television, and rarely had money for new shoes.

Although those customs are different from ours in the United States, there is one culture she practices that stood out.

Don't use plagiarized sources.
Get Your Custom Essay on Culture in Everyday Life Just from $13,9/Page

It is called pagmamano. Pagmamano is a Filipino culture that has survived the times and foreign influences. This is the practice of respect by asking for an elder’s hand and touches one’s forehead while bowing. One usually asks by saying “Mano po.” Mano po translates to “may I have your hand please.” In return, the elder blesses the person. In the Filipino culture the elderly, refer to parents and grandparents, cousins, or close family friends.

It is usually done when one visits a family, when meeting these people outside of the homes or after a religious activity. It is also common to bring children to their godparents during Christmas time to pay respect with this custom.

I found this custom in the Filipino culture to be shocking to me because, I have never seen it done before. I also see so many children act disrespectfully to their elders in this country, so it was a blessing in my eyes to see the elderly being respected. Now that I have learned of pagmamano, I participate, and have taught my own children the meaning of this culture. We do not use it in our own culture, but whenever we visit my friend Christeen and her family, we show enough respect to her and her family by participating in pagmamano.

I would say that the value assumption was slightly an issue when I first learned of this practice. I thought to myself, this is not the Philippines, we don’t do that here. After seeing the custom in person and how respectful the adolescents are to their elders, I realized I was wrong. I was happy to learn of it and see the children learning respect. You don’t see many American children show this type of respect. Since cultural relativism supports the theory that there is no absolute right and wrong.

Instead, the morals, standards and behaviors that vary among cultures must be taken into consideration. I was wrong to assume that pagmamano should be practiced in the Philippines. I think it is a great way to show respect. At first I thought to myself, that’s weird! Then, I realized that we do “weird” things too. She considers some of the things we do as “weird,” when we considered it normal. We just have to accept the fact that we all live together in this country that participates and allows different cultures. I am thankful that I learned of the pagmamano culture, and I respect it. 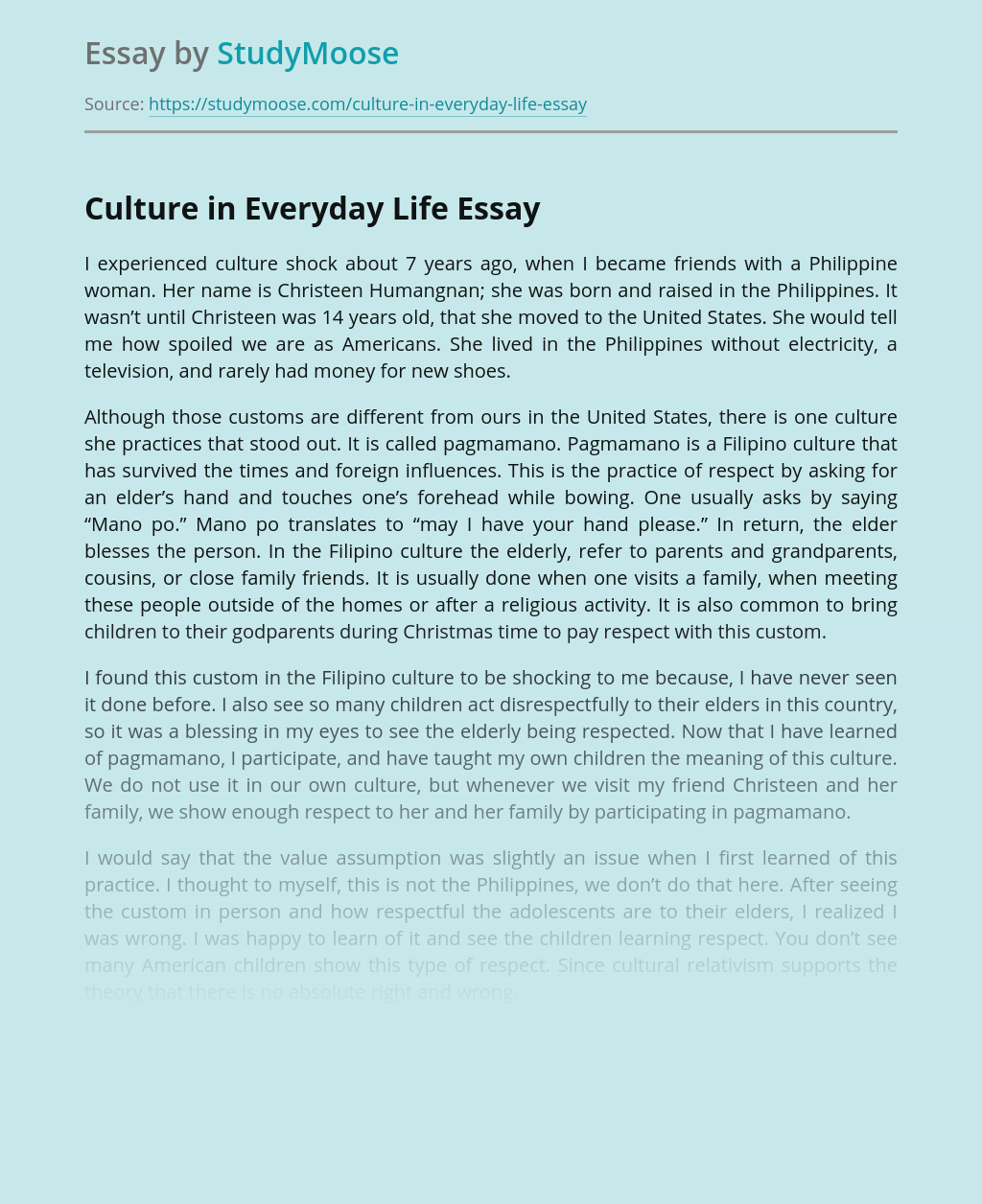 Watching the movie entitled “Children of Heaven” made me realize how a simple plot/ story can be as heart-warming and inspiring as any other film available out there in the market. It doesn’t take an elaborate story with so many twists and turns to make a terrific film for everyone to appreciate. Although the movie...

View sample
Describe How the Setting Can Value and Celebrate Individuality

Describe how the setting can value and celebrate individuality The Nursery shows respectful awareness of all the major events in the lives of the children and families in the nursery, and in our society as a whole and welcome the diversity of backgrounds from which they come. In order to achieve this, the nursery aims...

Germany has a rich history and has seen many changes throughout the past few decades. Though devastating struggles have been encountered, today Germany boasts the largest economy, as well as the second most populated country within the European countries. (Central Intelligence Agency, 2013) This paper will analyze the dimensions of German culture, how those dimensions...

Music has become one of the most effective and influential tools in various cultures all over the world. For several years, it has evolved into different kinds of genre such as opera music, hip hop, rap, R&B, grunge rock, metal rock, death rock, emo rock, alternative music and techno music. Aside from these types of...

According to the researchers from the Levin Institute, globalisation is defined as “a process of interaction and integration among the people, companies, and governments of different nations, a process driven by international trade and investment and aided by information technology. This process has effects on the environment, on culture, on political systems, on economic development...