Geography of the Philippines essay

Geography and climate have always had very potent effects on culture. Geography, or the study of relationships between people and locations on Earth, very often shapes the way people live and interact with each other. Climate, or the prevailing weather patterns over time of a region, also has drastic effects on society and cultures, and these statements are especially true in the South East Asian nation of the Philippines.

The Republic of the Philippines is an archipelago, or chain of islands, located off the south-eastern coast of Asia.

Don't use plagiarized sources.
Get Your Custom Essay on Geography of the Philippines essay Just from $13,9/Page

Consisting of over 7,000 volcanic islands with a total land area of nearly 300,000 square kilometers (approximately the size of Arizona), islands of the Philippines are predominantly mountainous except for densely populated coastal plains on larger islands. The country is located over the Philippine Trench, a plate tectonic boundary which forms part of the Ring of Fire (see Map #2).

The Ring of Fire, a region closely associated with volcanic and earthquake activity, lends a heavy influence to volcanic activity on the islands of the Philippines (one such example is Mount Pinatubo, a very active volcano on the island of Luzon.

See Map #1 for location of Luzon). The geography allows for some cultural diffusion, Islam, Buddhism, and Christianity all reached the islands by the mid 117th century although there are still places that are extremely isolated to the point of having no electricity7 at all and primitive methods of life.

The climate of the Republic of the Philippines is a warm and moist one. Affected by a northeast monsoon from November to April and a southwest monsoon from May to October, warm winds and moderate rainfall dominate the climate patterns of the nation. Approximately nineteen percent of Filipino land is arable, the second most in the region of South East Asia. As shown in the “Arable Land” chart, the only country near the Philippines with more farmland is Thailand with over thirty percent arable land. The warm weather and moist monsoons allow for growth of the nation’s main crops: sugar, and rice. Although only 19% of the land is farmable there is plenty forest and permanent crop space for exporting cash crops and lumber, as is shown in “Philippine Land Usage” pie chart. Forty-six percent of the archipelago is covered with forests for loggers to cut and sell at reasonable rates to give the economy a boost.

The Philippines have seen a steady increase in population over the last 40 years. Since 1960, when the population was over 27 million (see “Philippines Population Over Time” bar line chart), the nation has seen a steady increase of about 10 million citizens per year. In 2001, the population rose to over 82.8 million, an increase of over 20 million people in just over ten years, probably because of an increase in the abundance of jobs in the area of labor and services. Since labor costs were cut in 1992 due to a sluggish economy the population skyrocketed because people could now find jobs in factories and markets because of a foreign interest in hiring cheap laborers.

Over 95% of the Filipino population are of Malay decent, while the other five percent is mainly people of Chinese ethnicity, as is shown in the “Ethnic Demographic” pie chart. The dominant religion is Roman Catholicism, followed by Protestant and Islam (see Religious Demographic” chart). All of the popular philosophies in the Philippines came as a result of cultural diffusion from other areas, there is a very small minority that practice native beliefs to the region.

The Philippines have a stable educational system, with free schooling for children ages 7-12 years and one of the highest literacy rates of all the nations in South East Asia. According to the chart titled “Literacy”, the Philippines have a rate of literacy (94.6% among people over 15 years of age) challenged only by those of Thailand and Vietnam. Schooling is also mandatory for all children who are citizens of the Philippines.

Medical technology is another strongpoint in the Philippine society. Aids deaths are the lowest among neighboring countries shown in the “Aids Deaths” chart, with under 2000 aids deaths to date. This shows advancements in medicine and modernized facilities for people to be treated. There is one hospital bed available for every 860 people, and a physician for every 849 people. These ratios are very good for the region, neighboring countries are no where near that equipped for the care of ill people.

The Republic of the Philippines is, as stated, a republic. The “Head of State” is an elected president. The country is divided into 73 provinces under one Union, as illustrated in “Map #3”, though only the 55 largest provinces are shown since the others are not visible to the map’s scale. The national capital is Manila on the island of Luzon. There are approximately 150,000 active defense troops stationed in the country for various purposes. The only government-recognized official languages are Filipino and English. A universal law of suffrage grants anyone 18 years of age or older the right to vote on elected officials and any other deeds requiring a majority vote from the public. The government is stable and reliable to citizens, with a sturdy court system based on Spanish and American concepts and an executive branch that enforces laws efficiently.

The Filipino economy is based strongly on services and labor, as is shown in the chart for “Philippine GDP Sector Composition”. The sectors for agriculture and industry are both less than the services sector, showing that the economy relies heavily on services. Labor in the country is cheap , and rates are low for foreign businesses wishing to hire out production of goods.

The agricultural division of the economy has a strong influence, also. The chief cash crops are rice and sugar, both of which are grown on coastal plains on most of the islands in the archipelago. Farmland is restricted to the deep coastal plains because of the generally mountainous terrain the islands have from their volcanic origins. Two warm and wet monsoons fertilize soil and help crops grow in the fertile flatlands near the coast. Main minerals mined in the region are cobalt, copper, and iron ore, all of which are exported at fair rates.

Industry is doing well in the Philippines, the main industry for the country is textiles and since labor is cheap and there is a good mineral supply, machinery is not scarce. A great deal of pharmaceuticals are also produced in the Philippines.

Transportation is thriving in the Philippines. The Republic of the Philippines has more Airports than any neighboring nation, as is shown in “Number of Airports” graph. With almost 300 national airports, they have more than doubled the amount of any neighboring South East Asian country. Transport by air and sea is heavily relied upon, since the country has so many water borders. With over 36,289 km of coastline among its 7,000 islands, the archipelago of the Philippines heavily relies on boats and planes to move about, domestically or when migrating to other countries.

The Republic of the Philippines is a stable country built on a solid government and fair economy. Faith in the governing body is high, and the system of law enforcement and regulations are sturdily based on American and Spanish systems. Geography allows for growth of crops and an evenly dispersed population. Aside from extemporaneous volcanic activity and some tsunami action because of its location on the Ring of Fire, climatic conditions are beneficial to most because of the positive effects on farming and fertilizing soil. Socially, the differences in culture between regions and islands can be great, but for the most part the nation is made up of people with Christian Malay heritage, though many other ethnic groups exist in the nation. Medical and educational systems are both very stable and advanced, with low death-at-birth- rates and abundant hospital space, along with a mandatory and free school system for children.

All things considered, the Philippines are doing better than most South East Asian nations that neighbor the archipelago. With a well-balanced scale of politics, economy, and society, capped off with a mainly beneficial geographic setting, the Republic of the Philippines is doing better than most South East Asian nations in transportation technology, medical practice, arable and farmed land, forestry, and countless other areas of the country’s array of economic and social areas. With good population growth and even better projected growth, the Philippines should endure years of moderate prosperity in the future based on everything mentioned above.

Geography of the Philippines essay. (2016, Jul 02). Retrieved from https://studymoose.com/geography-of-the-philippines-essay 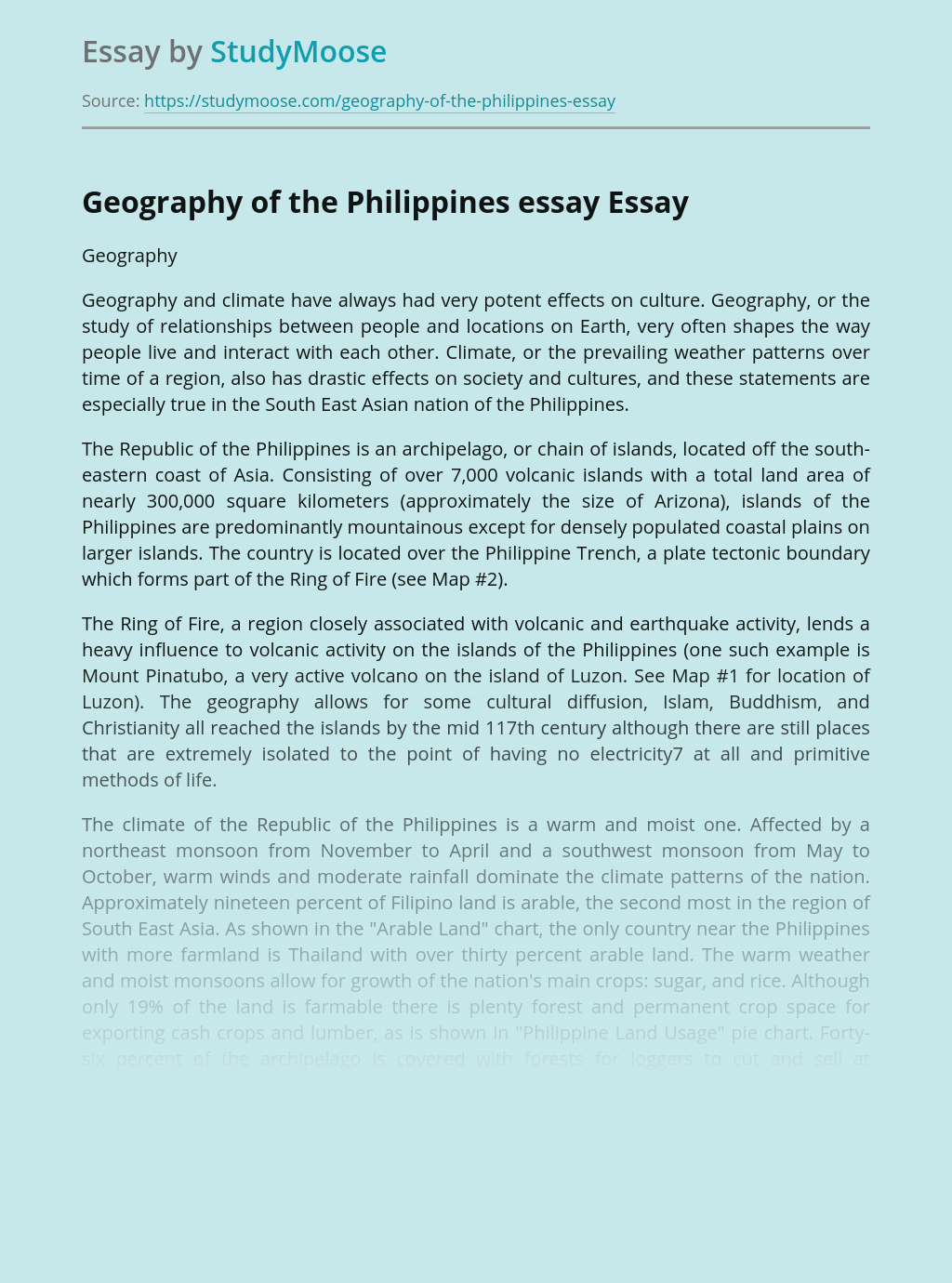 It is amazing how many things we take for granted. We make plans for the day, and don’t think twice about how those plans can be taken away in the blink of an eye. I never thought as much about it myself, until I faced with the shock, and undeniable truth of my grandfather’s death....

1. Intro The purpose of this project is to develop an international marketing plan for Hong Kong Airlines to broaden to the India market. The very first part of the job will cover the current marketing mix and techniques of Hong Kong Airlines, along with the SWOT analysis. The 2nd part will analyze the India...

"When i was growing up" by Nellie Wong

1. title- When I was growing up (poem)2. Composer- Nellie Wong3. Year- 19974. What does this text highlight about the concept of identity?This poem is about the narrator’s own assimilation into the dominant white culture, and a need to become something she in fact isn’t. It shows how society can influence your identity, because the...