* To investigate what patterns the river Allt Doire Nan Eun shows for wet water depth, water velocity and pH in its three courses.

* To investigate whether the river shows textbook characteristics for erosion and deposition in a river channel.

* To investigate how rock roundness and moss coverage changes downstream and at different points across a channel.

During the course of this geography field trip my group set out to investigate the aims stated above. To do this we travelled to Scotland.

Once there we stayed at the Kindrogan Field Centre in Enochdhu, Blairgowrie, Perthshire near Pitlochry.

Why was this Site Chosen?

We studied the river Allt Doire Nan Eun firstly because of the fact that each of its three courses were fairly close to each other due to the relative shortness (meaning that we could travel from one to the next quickly and therefore collect results from each of the three sites- upper, middle and lower course- within a day) and secondly because it was conveniently within easy walking distance from the field centre.

Were there any Signs of Human Impact?

As can be seen in the two pictures above, some parts of the river, especially in the upper course, are very close to the road (within 10 meters at some points); this meant that the natural formation of the land surrounding the river had been altered, which could have been a cause of the off-neutral pH of the river water. It would also mean that more water would drain into the river because of the impermeable road material.

Finally, the river was located inside land that was being used to raise cows; the constant trampling of the cows through the river and the surrounding environment could be considered as a human impact.

What are the Key Geographical Concepts and Processes Underpinning the Investigation?

Throughout much of this investigation I will be comparing my results to commonly accepted theories and textbook characteristics;

– A commonly accepted theory that I will be using to check my results against is shown in the picture below, the Schumm model:

– I will also be using the Bradshaw model (the ticked factors will be discussed in detail in this assignment):

– Additionally I will use the Tickertape (trolley) experiment to explain changes in river velocity (often used in physics).

Rivers run down a channel gradient. This experiment shows that the steeper it is, the higher the water velocity should be.

– Finally I will make use of the Theoretical Long Profile:

River Course- The upper, middle and lower courses are approximate sections of the river (heading from source to mouth respectively)

Gradient- Steepness or shallowness of a surface

* The wet water depth will increase downstream (due to increased hydraulic power erosion) and pH will decrease (as the river travels further away from the road and the human chemicals are slowly filtered out of the water for example by the forest’s vegetation).

* Rocks will become rounder and less covered in moss as the river continues downstream due to an increase in hydraulic power erosion. They will also have the least coverage and the highest roundness in the outer bend of the river where its water flows fastest.

. Hydroprop- a metal rod with a corkscrew-shaped twisting extension for the impellor (a plastic propellor with three blades)

Wet Width and Depth – For width, a tape measure was stretched taut across the designated area from the ground above one edge of the water to the other. The end of the tape measure was held down with a peg to prevent it from becoming slack. Measurements were taken facing upstream from the left to right bank (facing upstream was to prevent confusion between left and right banks).

Depth was measured every 10th of the river’s width; the meterstick was held vertically to keep readings accurate and reduce the chance of parallax readings.

Velocity (in cm) – This was measured at the bottom and 5 centimetres below the water surface using a hydroprop (with impellor) and a stopwatch. The stopwatch was started and the hydroprop was placed into the water facing upstream. When it had reached the shaft end, the stopwatch was stopped. If it was taken facing downstream on a different occasion, the flow would have been twisting it in a different direction which may have caused the results to be less reliable.

Flow Speed- This was measured using an orange, tape measure (stretched taut at 5m) and a stopwatch. The orange was dropped in the water and the time taken for it to reach the end of the tape measure was noted. A measurement was taken for the outside (thalweg) and inside bend. It is interesting to note that the orange almost always returned to the outside very quickly when dropped in the inside bend of the water. Sometimes a rock obstructed the path of the orange; it was questionable as to whether moving it would cause bias so we let the orange move naturally. 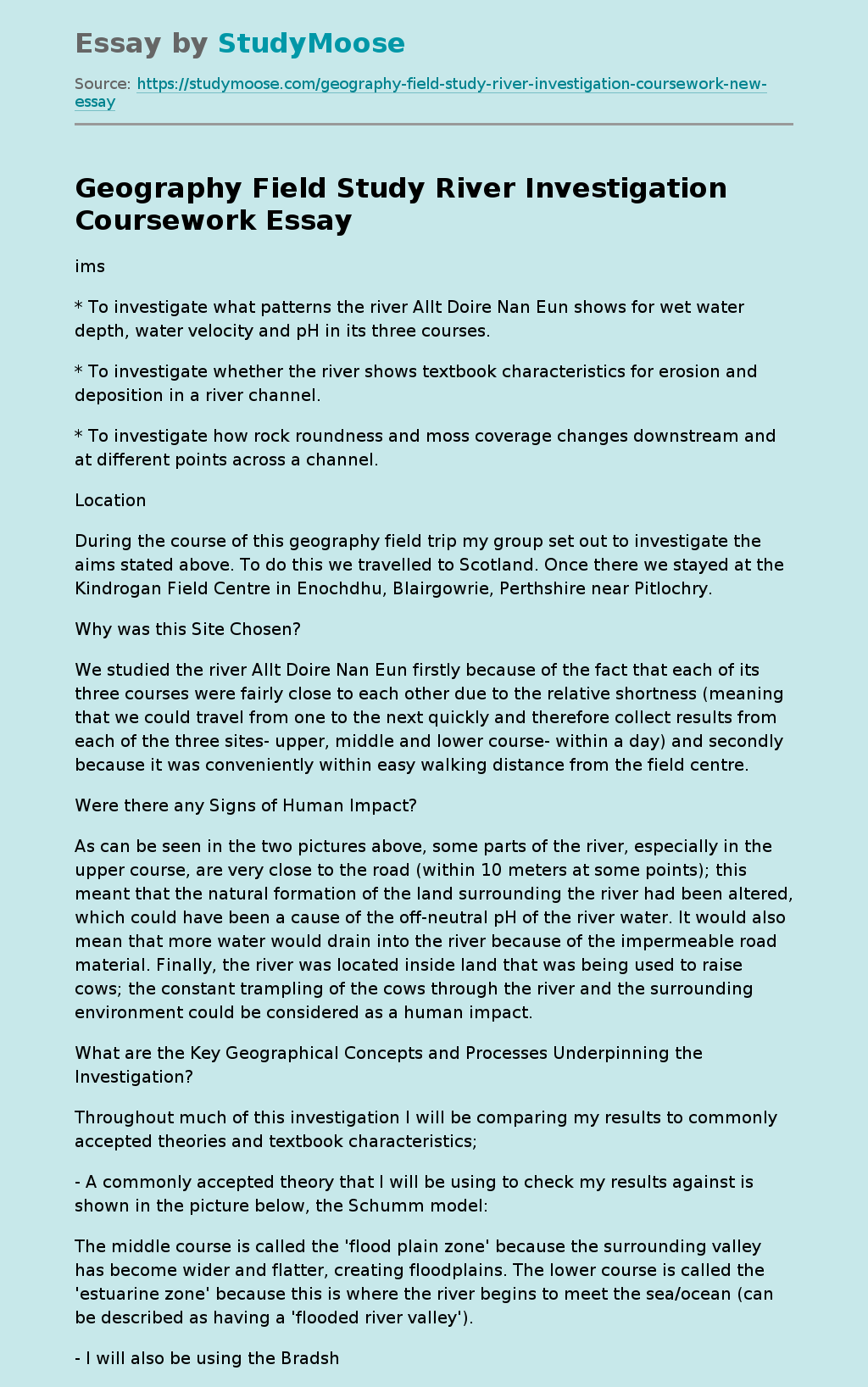