This paper seeks to make a financial analysis supplemented by research for General Motors and answer the following questions:

The type of business of company General Motors, any significant recent events affecting the company’s operations or financial position.

GM is into automotive production and marketing and financing and insurance operations.  The company designs, manufactures, and markets vehicles worldwide, with its largest operating presence in North America.  It s finance and insurance operations refer to General Motors Acceptance Corporation (GMAC), a wholly owned subsidiary of GM, which provides a broad range of financial services, including automotive finance and mortgage products and services  (GM, 2005)  (Paraphrasing made).

As to significant recent events affecting the company’s operations or financial position.  GM (2007) reported that its consolidated net sales and revenues fell to $192.6 billion in 2005 from $193.5 billion in 2004 while it incurred a consolidated net loss in 2005 of $10.6 billion, compared to net income of $2.8 billion in 2004.  The adverse results were determined primarily by losses at GM  North American (GMNA) operations since its subsidiary GMAC posted a declined income in 2005 of $2.4 billion, compared to $3.0 billion in 2004.  The attributed its results of operations in 2005 to be most significantly affected by the following trends and significant events: its GMNA market share and product mix.

The company explained that while industry-wide North American vehicle sales grew slightly, GMNA’s vehicle production declined 7% in 2005 to 4.9 million units due in part to GM’s efforts to reduce high dealer inventory levels, and its market share decreased by 1.2 percentage points.  It further claimed that compounding this decline in volumes was the effect of unfavorable product mix, whereby GM had fewer sales of higher margin large trucks and large cars, due to a combination of volatility of consumer demand and the anticipated introduction of new truck models to replace products at the end of their lifecycles (GM, 2005)  (Paraphrasing made).

The company’s auditor,  Deloitte ; Touche LLP , had two reports of GM in 2006 pertaining to it company’s 2005 annual report.  The first one is the Report of Independent Registered Public Accounting Firm Internal Controls Over Financial Reporting and Disclosure Controls.  The second one is the report of the auditor on the company’s financial statements.

The auditor’s work in relation to the internal control

The auditor’s work in relation to the internal control of the company was made in accordance with the standards of the Public Company Accounting Oversight Board (United States), where those standards require that auditor to plan and perform the audit to obtain reasonable assurance about whether effective internal control over financial reporting was maintained in all material respects. Their audit was also represented by the auditor to have also included obtaining an understanding of internal control over financial reporting, evaluating management’s assessment, testing and evaluating the design and operating effectiveness of internal control, and performing such other procedures as we considered necessary in the circumstances (2006 Auditor’s report) (GM, 2005)  (Paraphrasing made).

Before making its finding clear, the auditor explained: “We believe that our audit provides a reasonable basis for our opinions. A company’s internal control over financial reporting is a process designed by, or under the supervision of, the company’s principal executive and principal financial officers, or persons performing similar functions, and effected by the  company’s board of directors, management, and other personnel to provide reasonable assurance regarding the reliability of financial reporting and the preparation of financial statements for external purposes in accordance with generally accepted accounting principles. A company’s internal control over financial reporting includes those policies and procedures that

Based on its representation, auditor’s found weaknesses in the company’s internal control. The auditors thus said: “Because of the inherent limitations of internal control over financial reporting, including the possibility of collusion or improper management override of controls, material misstatements due to error or fraud may not be prevented or detected on a timely basis. Also, projections of any evaluation of the effectiveness of the internal control over financial reporting to future periods are subject to the risk (Van Horne, 1992) that the controls may become inadequate because of changes in conditions, or that the degree of compliance with the policies or procedures may deteriorate. A material weakness is a significant deficiency, or combination of significant deficiencies, that results in more than a remote likelihood that a material misstatement of the annual or interim financial statements will not be prevented or detected.”  (GM, 2005).

The weaknesses in management’s assessment

The auditor noted the following material weaknesses have been identified and included in management’s assessment: First, management did not design and maintain adequate controls over the preparation, review, presentation and disclosure of amounts included in the consolidated statements of cash flows, which resulted in misstatements therein, and second,  a material weakness was identified related to the fact that GM’s management did not adequately design the control procedures used to account for GM’s portfolio of vehicles on operating lease with daily rental car entities, which was impaired at lease inception and prematurely revalued to reflect increased anticipated proceeds upon disposal. It added that these material weaknesses were considered in determining the nature, timing, and extent of audit tests applied in their audit of the Consolidated Balance Sheet and the related Consolidated Statements of Income, Cash Flows, and Stockholders’ Equity of the Corporation, the Supplemental Information to the Consolidated Balance Sheet and Consolidated Statements of Income and Cash Flows as of and for the year ended December 31, 2005 (collectively, the financial statements and financial statement schedules) and that this report did not affect its report on such financial statements and financial statement schedules (GM, 2005)  (Paraphrasing made).

Despite the concurrence with the poor internal control of the company as found by management, the auditor reported that its audit of the financial statements for purposes of expressing an opinion was not affected. Hence the auditor said, “We have also audited, in accordance with the standards of the Public Company Accounting Oversight Board (United States), the Consolidated Balance Sheet and the related Consolidated Statements of Income, Cash Flows, and Stockholders’ Equity of the Corporation as of and for the year ended December 31, 2005. Our audit also included the Supplemental Information to the Consolidated Balance Sheet and Consolidated Statements of Income and Cash Flows (the financial statement schedules) as of and for the year ended December 31, 2005. Our report dated March 28, 2006 expressed an unqualified opinion on those financial statements and financial statement schedules and included an explanatory paragraph relating to the accounting for the estimated fair value of conditional asset retirement obligations described in Note 1.” (Auditor’s Report, March 28, 2006) (GM, 2005).

What was the total dollar amount of dividends declared in the most recent year reported?

The company’s profitability is poor. This is evidenced by a very low gross profit margin of 11% in 2005 which actually further declined from 17% in 2004. Gross margin measures how much a company earns for every sale per unit made and for the company to earn only 11% of sales in 2005 would not be enough to cover operating and interest expenses.

The company’s cash position may appear good by good liquidity position by it is being threatened by guaranteed employees benefit which the company must have to respect in accordance with its existing agreements with its employees.

How does the company’s performance compare to similar companies and/or industry standard?

The company is performing poorly in relation to other firms in the industry. Latest information from Yahoo Finance (2007) indicated that Daimler Chrysler and Toyota Motors are showing positive net incomes while General Motors and  Ford, which are American automotive companies showed a net loss of $9.58 billion and $6.82 billion respectively.  In terms of market capitalization, General Motors has $ 18.63 billion which is below the industry average of $ 64.05 billion (See Appendix B).

The industry opportunities that could be made available to company are the ever growing global economy and  the presence of economies of scale as barrier to entry because of large investment for companies to come in the industry. As to how the company has capitalized on these opportunities is really a big surprise.  The Japanese automotive manufacturers like Toyota Motors have overtaken their counterpart in North America region as a result of more competitive prices and more innovative products as well as lower cost of production and more flexible relationship with their employees that in turn afforded them competitive advantage over their American counterparts.

What current or potential threats exist for this company?

The current threats to the company are the escalating cost of heath care in the US. In the past years, the company has already reduced employees because of declining demand for its  products and yet increasing retirements cost which are part of business cost (Samuelson and Nordhaus, 1992) of the company. However, there are still many employees despite the slump in the demand of the company’s products. Since many of its employees enjoys medical benefits as employees under American law, the increasing medical cost therefore poses as a big  threat that could further erode the company declining profitability.

The company faces a very precarious situation because of declining revenues and yet increasing cost in relation to sales.  Its already gross profit margin is an indication that the company has very high cost of production in reduction of its competitors in the Industry particularly Toyota Motors and Daimler Chrysler which are showing positive result of their operations. Production cost normally includes cost of raw materials, direct labor and factory overhead.  Company’s direct labor cost in North America may no longer be competitive compared to its competitors since comparing the number of employees of the different firms in the industry would show that its competitors (See Appendix B) also have big number of employees yet said competitors could perform better. If therefore operating expenses and interest charges are further deducted the company will really be left behind in performance by its competitors.

General Motors need to arise from its fall before it’s too late. It makes the critical decision of making the company to survive by cutting what is causing it big cost of doing business. It should resort to outsourcing many of its support services so that it could reduce cost significantly which could mean offering the early retirement of may employees who have more to take than to give to the company. It should also stop distributing dividends because it could force the creditors to ask for bankruptcy for their protection. Giving dividends despite the losses could mean constructive liquidation and could bring GM really on its knees. The company’s strategy (Porter, 1980) must protect itself from industry treat while taking advantage of industry opportunity.  Using PEST and Five Forces Analysis could help in formulating its strategies (Papers For You, 2007) 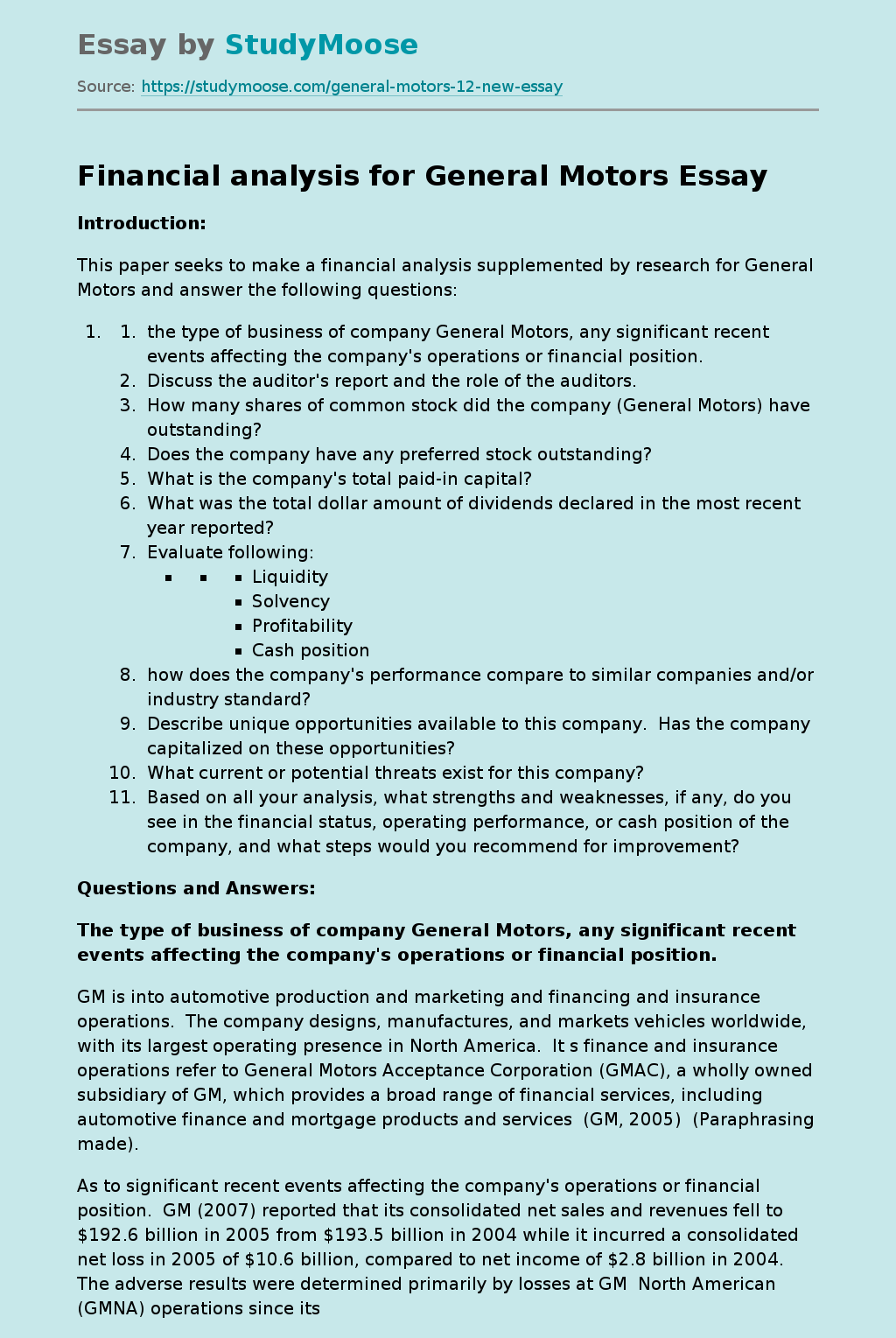