The article wants to make us to think about gender roles since a religious perspective, Christian and Islam share almost the same treatment against female and some of their customs are in favor of women in the sense that they respect them as mother and wife. Despite of that, it looks like Christian and Islam have oppressed female. However, as the article’s author says, it do not depend on what the religion praise, but on what believers think and do.

Don't use plagiarized sources. Get your custom essay on
“ Gender Roles and Religion ”
Get custom paper
NEW! smart matching with writer

I t means that the problem is not the religions itself, but the fundamentalists are the ones which lead other people to think that religion in special Islam is a source of negative treatment against women. The author which is a believer tries to portray that at the end the “gender roles” are not a problem, it is important that each gender has their own identity but in the end, what really matters is what God has prepared for “each one of us”.

In my personal opinion, religions have and important role in the built of the current stereotypes because of the tuition most of them teach. Let us see the case of Christianity which the main religion in our country.

The ancient Jew traditions registered on the Bible do not treat the women in the same way than men. Why did not Jesus Christ choose women as his followers? Why the role played by women on Bible is not as important as the one played by men? They do not even mention women as a big part of the marvelous plan God has to save us from sin.

Bible shows us men as the strong, invincible, leader, warrior and women as the mother, weak, inferior and tied to the husband will. It is very interesting to notice how Christian reverence Mary and in the same way judge Eve as the bringer of the sin to Earth, I think that there is a double moral here. So, we can see that at the end some of roles we have in our society have been affected directly or indirectly from what religion teach us.

I am not a devote Christian however, I agree with the author in sense that religion help people to accept themselves as they are. I personally think that there is not necessary to follow a strict role, everyone should be free of play the role they want. I am conscious that this is not possible always as the author says: “People just don’t like those who don’t fit in boxes.” However depends on each one follow the roles as rigid as society demands or be more flexible. Gender roles are not bad, gender roles make a difference between men and woman, and they give them their own identity. I think the same as the author; the problem is how rigid those roles are. I think that is not a matter of which gender is superior, every gender has its weaknesses and strengths and both are a complements. If we understand that, the infinite battle of genders that has started many years ago may end in a truce. 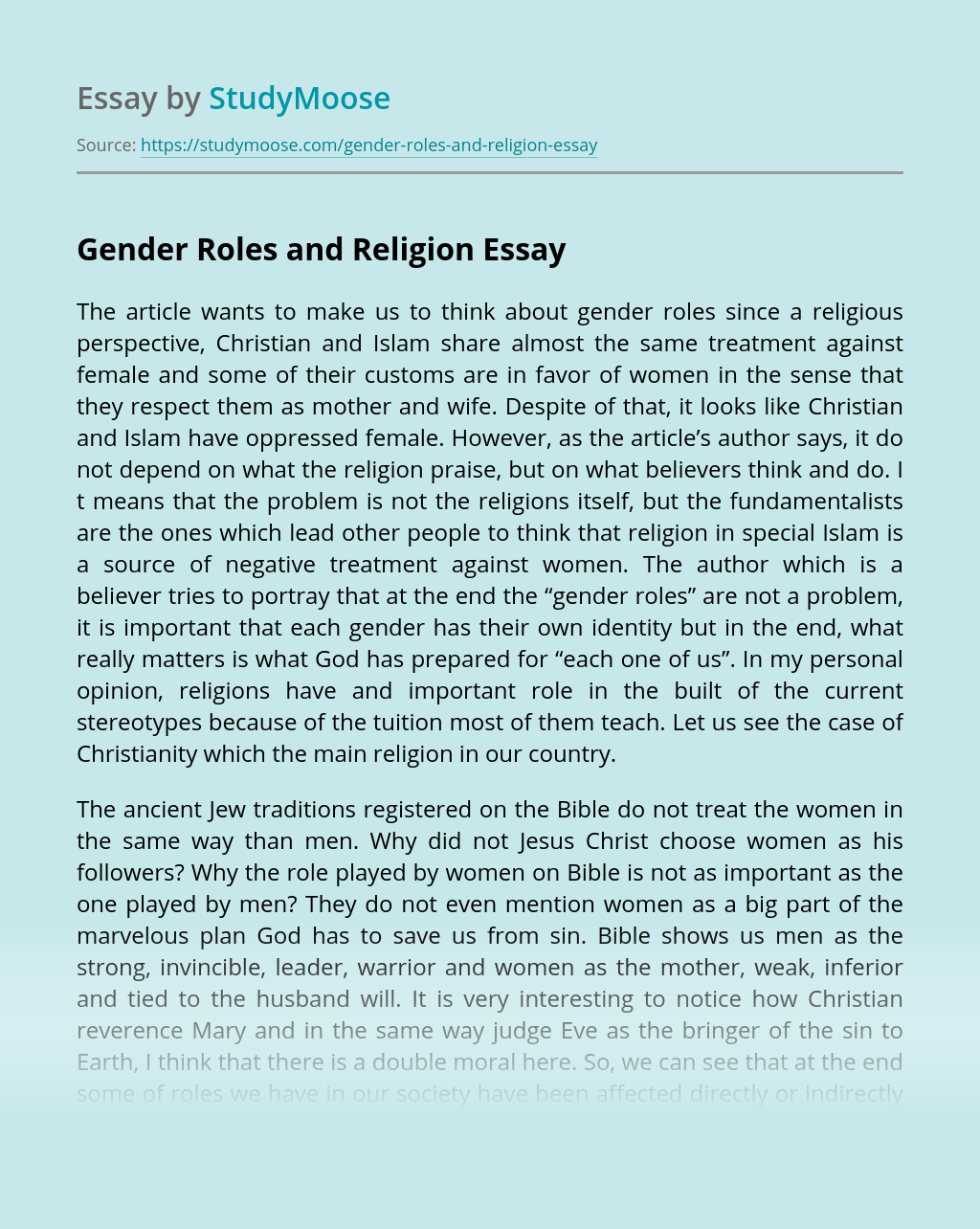