There are many differences between an ancient religious viewpoint of the Greeks and Romans and a modern world religion viewpoint. I feel that the most distinguishing difference and the difference that I feel makes the biggest impact is that in a modern world religion society believers say there is one God or that the religions today are monotheistic, whereas in the ancient religions we have studied in class citizens say and believe there are multiple gods or were polytheistic. For example the Greeks believed in twelve gods such as Zeus, Poseidon, Apollo, and Artemis.

Don't use plagiarized sources. Get your custom essay on
“ Ancient Religion vs Modern Religion ”
Get custom paper
NEW! smart matching with writer

They all had names other than just God.

This difference is obviously very apparent. In the ancient Greek religion there are gods for everything including grain, the moon, and the underworld; of these gods one is more powerful than the others but they have all power. For each element of the world they lived in, there was a god assigned to each. These gods were both male and female, had relationships with each other, and many had equal power.

Today in Christianity and other modern religions, it is believed there is one God who rules all. He created everything, hears all things, sees all things, and basically is everywhere. In ancient religion, the gods were both male and female.

This showed that both males and females had power and it was believed that both genders were capable of creating, and worth worshipping. Versus Christianity, where the God is simply a male, and there is no woman god. The worship of many gods meant that the citizens of ancient worlds understood that one person or being should not hold all of the power and that power should be equal.

Another difference I feel comes from the difference in being monotheistic and polytheistic is that today God is pure and has a wholesome character that is essentially perfect with good morals. God does not have imperfections like humans do. But in ancient religion the gods had the personalities of humans and were not so perfect. This difference I think attributes that humans don’t know why God behaves the way he does or does the things he does, but when the ancient gods would act like humans, they knew why, they shared the same emotions and personalities.

For example Demeter felt the pain of loss when Persephone went to the underworld, this is indeed similar to the sadness a woman gets when she can’t have children or when all of her children have left the nest. One more difference that arises between modern world religions and ancient religions is that today God is abstract and must be all things to all people and is seen as a parent to protect humans. In ancient religions the many gods were seen more as divine beings who just made the earth better but frequently punished the humans and well didn’t really like the mortals.

This main difference creates many more differences among the religions of different periods and creates a boundary that is clearly drawn between the religions of the ancient world and modern world religions. The gods of ancient worlds reflect the humans’ personalities, thoughts, and the balance of power they strive for in the world, and God represents perfection, good morals, and everything humans wish they could be. This main difference is fundamentally the difference that builds and creates other differences between ancient religions and modern world religions. 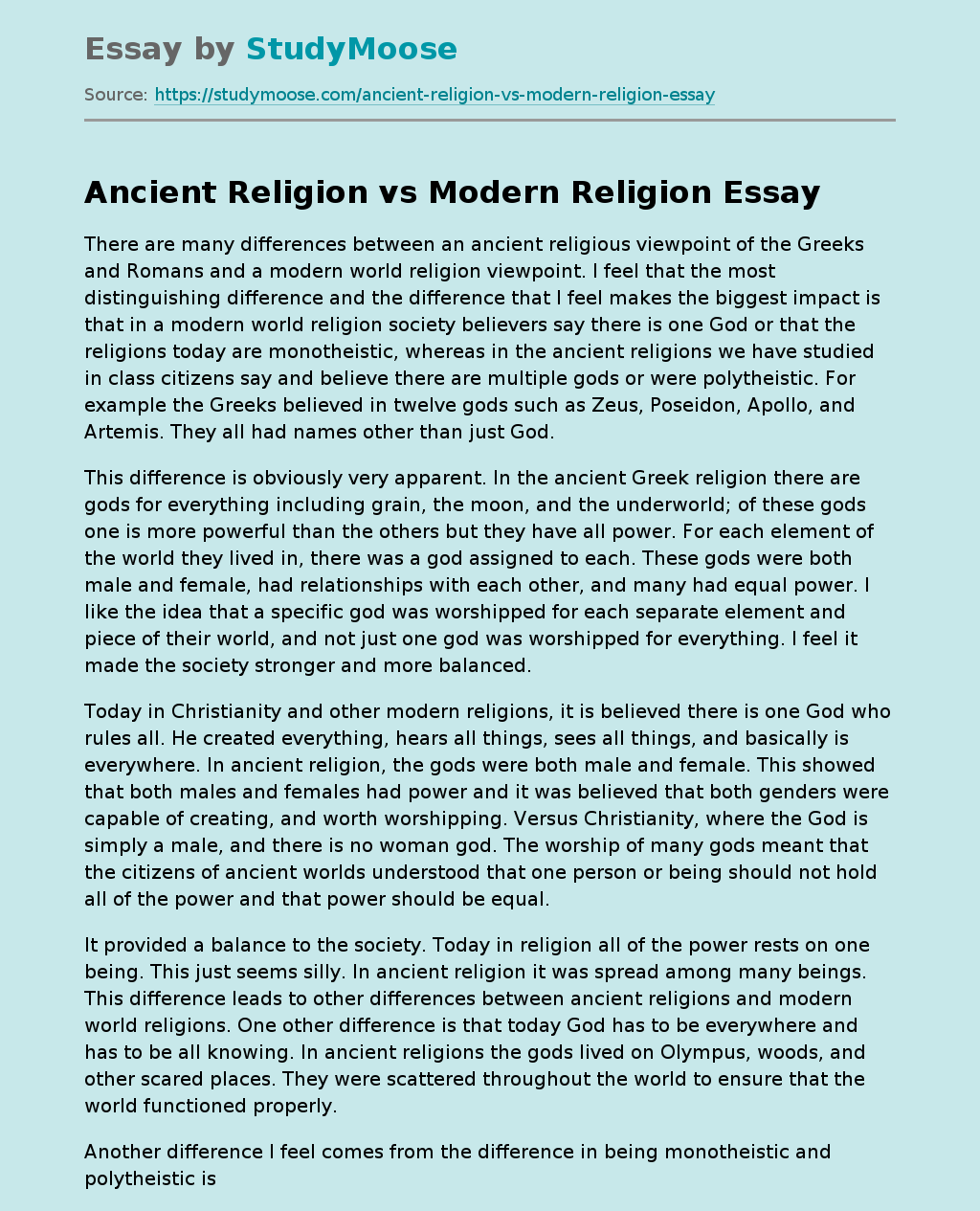