In our present day, many believe they should be treated fairly regardless of their race, religious beliefs, or gender. When gender equity is put on the table as the main discussion we may find women to have more aggressive opinions and views rather than men. Some will suggest this is due to the thousands of years women have been limited to certain rights that men are so freely able to obtain. Greek men are born and viewed as the superior being while women face limits on their freedom and justice.

Don't use plagiarized sources. Get your custom essay on
“ Gender Equity Issues in Antigone ”
Get custom paper
NEW! smart matching with writer

They are, however, given restrictive rules and laws that do not apply equally to their counterpart.

According to one analysis of Antigone, “women individuality were violated and hidden while they were subjugated by a man’s desire”(Karim, 2012). In Antigone, Sophocles changes the script of many before him, as he displays his main character, Antigone, a courageous and respectful woman, who has great beliefs in the Gods. Antigone is quick to put her family before the law as she goes against the king’s order.

Antigone can be looked upon as a great leader of society except there’s one problem; she is a woman which has great effects on the actions she wishes to take.

Even though Ismene, Antigone’s sister, understands her decision she goes along with the king’s order to keep from disobeying the law. Antigone feels that the king, Creon, is being unjust when he doesn’t allow her to give her brother, Polynices, a proper burial.

Creon becomes devastated when he finds out that it’s a woman who has publicly defied him. “There are factors, such as, catastrophes, wars, and events that have effects on the culture, history, and politics of one society. However, sometimes domestic issues can also cause great debate and reflect large concerns governing society and culture” (Rokem, 2006).

Antigone’s rebellious act upset gender roles and threaten the Greek culture. Women in the Greek Society In Ancient Greece it was very common for men to have a dominant role. Men were highly involved in politics and it was very rare to see women engage in jobs that were thought to be more suited for men. Women stayed in the home and if they worked they normally held jobs as maids or servants. Men looked for wives who didn’t speak much but instead kept to their cleaning, weaving, and caring for the children. Women were forbidden to go against the beliefs of men and if they spoke out against a man then harsh consequences would follow.

The Consequences Antigone Will Bare In Sophocles’, Antigone, Creon sees Antigone as a threat to his society. He hates that a woman is going against his first order as king. He makes it clear that Polynices is not to be buried but will remain on the field of battle to rot. When Antigone, a woman, buries her brother, Polynices, Creon is devastated. Creon feels Antigone is trying to rule over him. She is thought of as disobeying Creon and the law he has set forth. He wants to make an example of her and punish her for going against his law and his gender role.

Creon: The Male Role Throughout the play, Antigone, Creon displays his feeling of women time after time. He doesn’t hold back his beliefs that men are dominant and should never be over powered by any woman. Creon states to Antigone, “while I live, no woman shall rule me” (Sophocles, Jebb trans). Creon feels that Antigone is out of order by defying him. He hates that Antigone is breaking the law but he also hates the fact that as a woman she is going against him. Creon Creon: The Male Role doesn’t care that his son, Haemon, has asked Antigone to marry him.

Once Antigone breaks the law and confesses her beliefs to him, Creon will not approve of her as a wife for his son. He has to terminate her womanly courage and sentence her to death. Many women in the kingdom probably felt the same as Antigone but they dare not express them to a man. Ismene even felt that Antigone was being treated unjustly but she remained in her woman role and would not stand with Antigone. At one point she couldn’t understand why Antigone was reacting in such an unlawful way. Ismene Beliefs as a Woman Many readers may feel that Ismene was nothing more than a coward.

Some may ask how she could stand by and allow someone to disrespect her dead brother. Unfortunately, Ismene beliefs and actions were those of many women in their society. It was expected of Ismene, as a woman, to follow the word of man and his law. Ismene is willing to defy the Gods in order to respect the laws of man. She is afraid of Creon and she allows herself to be governed by him. She is like all other women in her society who know their boundaries. Ismene kept her inner thoughts to herself. She was upset that no one else in the town would not stand and support Antigone’s decision.

Ismene displays her feelings of being a woman to Antigone as she says, “Nay we must remember, first, that we are born women, as who should not strive with men; next, that we are ruled of the stronger, so that we must obey in these things” (Sophocles, Jebb trans). Ismene beliefs are common in comparison to other women in her society but Antigone was not going to stand by and allow men to defy the Gods, even if it meant death for her. A Courageous Woman The character, Antigone, was an interesting and dynamic role due to her personal traits.

Antigone held her personal convictions tightly and her beliefs in the Gods tighter. She held her allegiance first to the gods rather than to the mortal institutions of man. Antigone was not just a rebellious role but was much different than other docile women of her day. Despite being a woman, Antigone is not afraid of disobeying Creon’s law nor is she afraid to tell Creon how she has no respect for him. Antigone was being punished for following the Gods which were of higher statue than Creon’s law. She stated, “I have longer to please the dead than please the living her: in the kingdom down below, I’ll lie forever.

Do as you please and dishonor the laws the gods hold in honor” (Sophocles, Jebb trans). She will not defy the Gods to please Creon and takes her death sentence lightly. Creon hates that Antigone won’t go against her beliefs. She knows she is being used as an example to show other women how to not act. It takes the Gods to interrupt Creon’s death sentence to Antigone. Unfortunately, it comes too late and before Creon can release Antigone she has already taken her own life. Thoughts of Antigone Antigone is a reminder of how women were mistreated in previous societies.

Even though the play ends tragically, Antigone will never be forgotten as a woman who stood up close to her beliefs regardless if she was cast away by an authoritive male figure. She didn’t care if she had to stand alone but she was willing to die rather than obey man’s law and dishonor the Gods. Karim (2012) suggests, “routine fundamental subject of burial of the dead created conflict relative to law, religion, and culture. It also generated critical debate on a woman’s status. ” Thoughts of Antigone Antigone was a role model to other women because she remained true to her religion by going against the culture and law of her society. 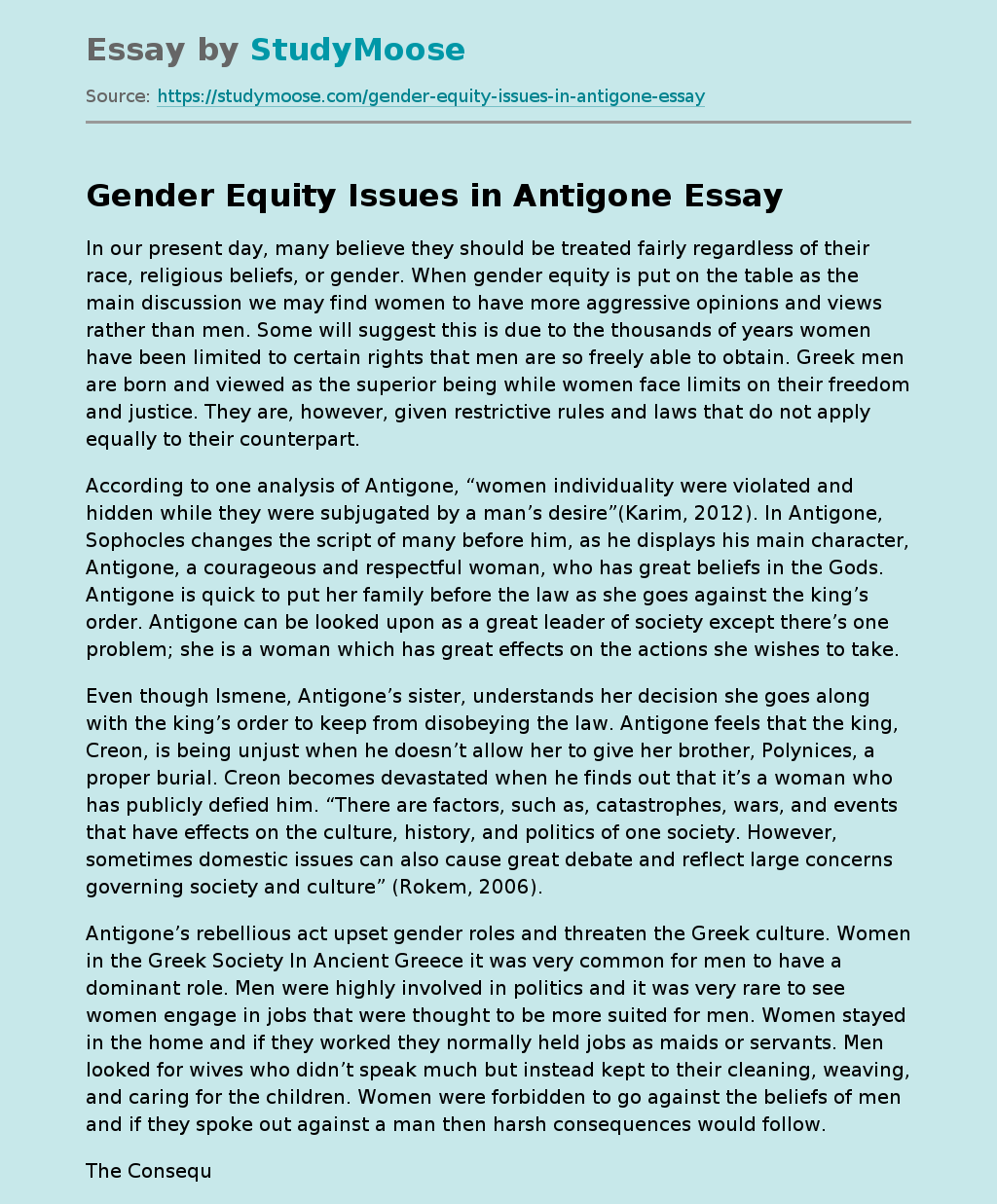