Traveling is a rite of passage for some younger people. Many consider these times rewarding to the psyche of a young adult, as experiences in other lands broaden their senses. College students embark on sabbaticals to spend time in the real world. Others temporarily replant themselves, to experience other places, cultures, and languages, and in doing so to find out more about themselves. And there are that select few who use relocation as a form of escape from their tumultuous lives, because as they say, “the grass is always greener…” Some never return home.

Don't use plagiarized sources. Get your custom essay on
“ “Geese from Drinking Coffee Elsewhere” by Z.Z. Packer ”
Get custom paper
NEW! smart matching with writer

Whatever your reason for these journeys, it should be understood that going outside one’s comfort zone can test your mettle, and good judgement and wit are crucial in surviving in a foreign land, where language, culture, and even racism are an issue. A few wrong steps and you may find yourself a few shingles short of a roof over your head.

It is that last category of drifters who define “Geese,” where Dina and four other ex-patriots find themselves sharing a one room flat in Japan. These misfortunate individuals are escaping from themselves, and through misplaced pride, ill preparation, and execution find themselves on the brink of self-annihilation, finally regressing into their own futileness.

The story begins with Dina, a girl from a hardscrabble section of Baltimore with “boarded-up row houses the city had promised to renovate,” (210) relating to her reasons for moving to Japan. Aside from high yield economic opportunities that don’t exist in her neighborhood, she pines for a “loveliness” that Japan will offer through its ceremonious bowing, sashimi delicacies, calligraphy, and architecture.

(211) Really what she is seeking is a respite from her former environment, where the creed is “Never advertise your poverty. Dress immaculately. Always smell good, not just clean.” (224) Once in Japan Dina soon finds herself in a community of people, also fleeing from their own pasts. Petra, a once aspiring model who had a career-changing accident, has exhausted her “once sizable bank account” for reconstructive surgery and is now broke, and it becomes apparent that she is escaping a place that once knew her as beautiful, a land of runways and pan-seared foie gras. (215, 219)

In tow with petra is Zoltan, her hot-headed boyfriend who “had given up bodybuilding once he stepped off the plane at Narita,” a statement that if probed procures tears from Petra. (218) Later, we see the arrival of Sayeed, another squatter who has defied his family’s honor and has been exiled from morocco, only to fail at opening a business in Japan. After his assault on Dina, his allusions of conspiracy and subsequent violent behavior suggest he is also escaping a world that is aware of his imbalance. Finally there’s Ari, whose back-story is not revealed, though he forms a glue that keeps the community together, which may be his crux, as this reflex hints he had presided over a different family.

As these folks settle in and eventually succumb to their fate, one has to wonder, why stay in this same state? Why cling to this unfamiliar atmosphere and not redeem yourself? This inquiry is explored as an expression of pride when Ari is asked why he let them stay at the apartment in the first place. “Ari held out his hand and said, ‘See this? Five fingers. One hand’” (218). And after a roommate has had enough, Ari retorts, “Can’t take? You must!” (222) Petra’s insistence that she ”could not go back to Moldova” reflects that she literally doesn’t want to show her face again to her contemporaries until her talked-about trans-pacific voyage to save face is fully realized. “I go to America next. Say, ‘Fix my face. Fix face for actual.’ And they will fix.” (215-216) Her partner Zoltan is also dealing with his own physical hang-ups. His body, once looking as if “constructed of hundreds of bags of hard-packed sugar,” is now eviscerated due to a diet of “crackers and ramen.” (217-218)

But he proudly parades around pictures of his former glory in an attempt to distract himself from his deportation and sudden halt of his career. Dina feels that returning to Baltimore at this point would be considered a failure, as she told Miss Gloria and others of her “hopes of making a pile of money, socking it away, then living somewhere cheap and tropical for a year.” (210) Coming home empty-handed and not having learned anything in Japan would label her as a dreamer, and the boarded-up row houses would look the same, against her wishes. And later, when she finds some solace in memories of Baltimore, and even homesickness, the feelings are quickly “swept away like little wrappers,” (224) and she goes on to endure her current situation. It is the blind tenacity of these five characters, along with their near-sightedness and lack of planning, which unsurprisingly leads them to hit rock bottom, especially in the case of Dina.

All the characters seemed to have ignored the fact that Japan is hard place for a foreigner to succeed in. In addition to the obvious language barriers, there is also a current state of “Economic downturn,” where “people want to hire Japanese” as an “obligation,” which leaves Dina and her cohorts with only marginal or seasonal opportunities, or a “gaijin dumping ground.” (212) There is also an undercurrent of sexism and racism affecting all of these gaijin. When a Japanese boy encounters the quintet in the park, he wants to ask, “Do you have tails? Do you come out at night and suck blood?” (228) And being in a land where the Japanese women themselves experience sexism, Dina finds herself harassed by businessmen and propositioned by a visa interviewer. (214)

But they will persevere, although rather ineptly, and without foresight. Dina, after losing her job, sells the return part of her round-trip ticket, and actually takes a vacation. She eats “an outrageously expensive bento lunch,” visits a part of Tokyo that sells “electronics she couldn’t afford,” then observes “skinny prostitutes” as they “dart into doorways without signs.” (213) And now she is broke with an expired visa. Petra, who was regrettably unaware that there were no opportunities available for a person with such an “affliction,” (216) is now adamant in not finding a job, and her main contribution to the household is incessant weeping.

Her other half is now content in “maundering about with the look of a beast in his lair,” and also resists seeking employment. (217) This couple wants to simply disappear into Japan. Sayeed has no backup plan and blames his financiers back home as well as Dina. Finally Ari, the meek breadwinner of the group, has lost his job near the end of the story and has failed to save any money. It is around this point that begins a period of petty theft, public humiliation, and near starvation. Dina’s “nebulous fluffy things that had started in her chest” (211) have tragically led her to dart into her own doorway of prostitution.

Dina then sees a formation of geese, which reminds her of the promise-keeping kamikaze, whose planes were “allotted just enough fuel for it’s one-way trip.” (233) This arrogance of youth is demonstrated in the group’s destination of self-destruction, with escape, pride, and obliviousness at the wheel. We learn how their bitterness is a continuation of what existed back home. While “Geese” is certainly a page-turner, in the end it leaves one wondering what’s at stake for the clan. Will they roam further? In my earlier travels, I too have pondered my fate while watching a flock of birds fly by, and have been left to walk for four hours to my friend’s farm in the middle of the night, while wondering what I was fleeing from. But I luckily knew when to get off the road and return to normalcy. When in dire straits in a “foreign” place, a trip to the local embassy is your best bet. I should hope that this flock of migrants has the wherewithal to do the same. Safe travels. 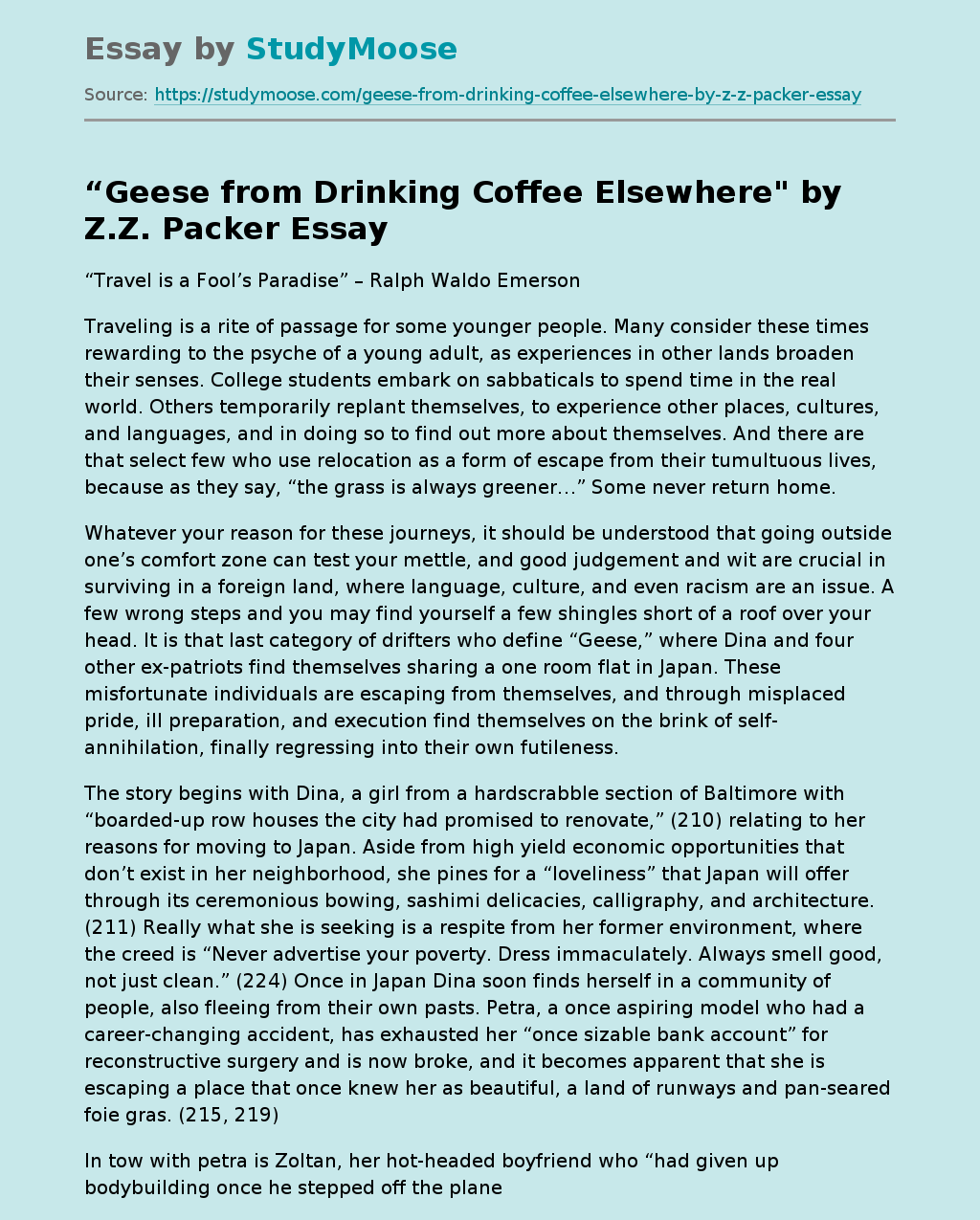