The rush the speaker gets out of blackberry eating is paralleled to the enjoyment he finds in thinking about certain words; words which call up the same sensory images the blackberries embody.

Don't use plagiarized sources.
Get Your Custom Essay on Galway Kinnell’s Blackberry Eating Just from $13,9/Page

The speaker’s appetite for the berries is later paralleled to his appetite for words. In the next line, the speaker describes the stalks of the blackberry bushes as “very prickly. ” This is the first negative image used in association with the blackberries. All the previous images have been positive characteristics of blackberries- fat, overripe, icy, and black. Perhaps, this negative image of the prickly stalks is being used to show that along with pleasure invariably comes pain in the natural world.

This same idea used in the context of the words suggests the two-fold potential of words to both benefit and harm. In the next line, the prickly stalks are attributed as a penalty that “they [blackberry bushes] earn for knowing the black art. ” This imagery of the flowering of the bushes being a black art lends a magical, bewitching quality to the blackberries, an idea that there is something wickedly tempting about the berries. In connecting this idea to the “word” metaphor, it shows that the ability to tempt and persuade with words can also be a form of black art.

In the next line, the speaker talks about standing among the blackberries and lifting the stalks to his mouth where “the ripest berries fall almost unbidden to my tongue. ” The words “fall” and “unbidden” are used in this line to show that the berries come easily, almost voluntarily into the speaker’s mouth. It creates the idea of a mutual attraction between the speaker and the berries. The speaker goes out to seek the blackberries but once he finds them they “fall unbidden” into his mouth. The speaker then switches gears in the next line by finishing the thought with “as words sometimes do, certain peculiar words.

In the next line, “in the silent, startled, icy, black language” the speaker is describing the “peculiar words” in the same way he described the blackberries in the beginning of the poem. The blackberries are also described as “icy” and “black. ” Here the speaker is strengthening the metaphor he has created between the two objects. This allusion is further strengthened in the last line of the poem when the writer says “of blackberry eating in late September. ” The ending of the poem now echoes the beginning.

The poem has come full-circle and the correlation between the sensory experience of blackberry eating and the auditory pleasure of words has been made. Blackberry Eating is metaphorical poem about the similarities between the pleasurable experience of picking and eating tasty blackberries and the auditory enjoyment of hearing the sound of certain words. Both the blackberries and the “words” provide a pleasurable sensory experience that the speaker collapses together and relates to in the same manner. Blackberry eating becomes a tangible experience that is used to depict the way the speaker intuitively reacts to certain words. 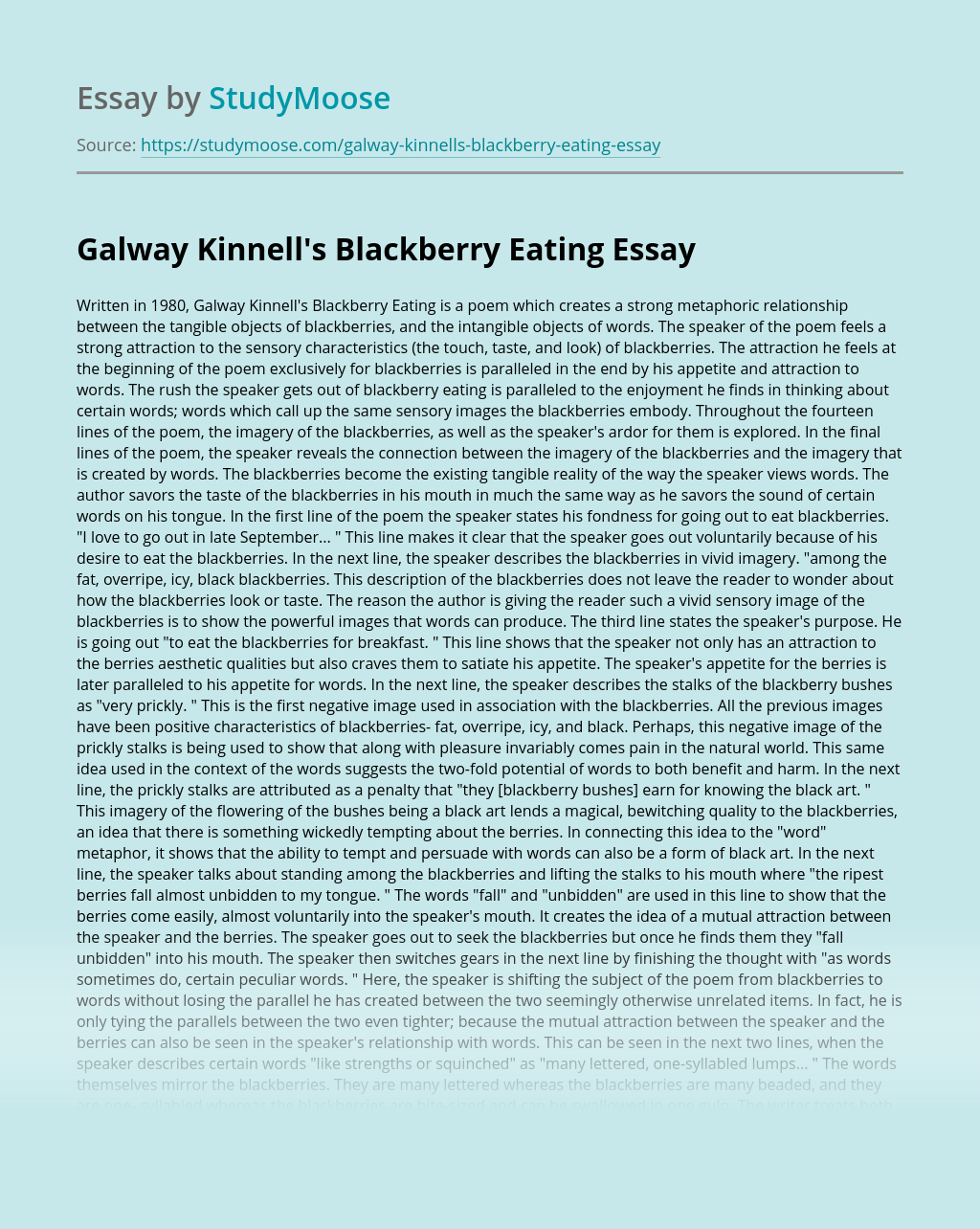 Define the transformations that have taken place between the sculpture of the late archaic period and that of the early Classical period. Note how these imply a change in relationship of the viewer to the work of art. Throughout history, sculptures have developed significantly. The Western tradition of sculptures began in Ancient Greece along with... VIEW ESSAY

The last sentence in the book Animal Farm relates to the book in so many ways. First I must say that in the end the pigs became what they hate. The pigs slowly became just like Jones throughout the book. They even broke their own thought up commandments and changed them. They believed they were... VIEW ESSAY

Whenever I think about my hometown, a lot of memories from my childhood and adolescence come to my mind and I become very nostalgic. If only I could return to Nowy Sącz now – the place where I was growing up. For some time I have been living in Warszawa, but in my dreams I... VIEW ESSAY

1. How did the French become the dominant competitors in the increasingly global wine industry for centuries? What sources of competitive advantage were they able to develop to support their exports? Where were they vulnerable? French wine makers also face challenges that are not internal to the industry. For instance, France lost market share in... VIEW ESSAY

The movie Gran Torino, is a movie that is based on an old neighborhood which was mostly American nationalities living there. Through the years this changed and it became an Asian society to live in. This movie was directed and produced by Clint Eastwood, which we has also one of the main characters in the... VIEW ESSAY