It is hard to imagine that just one theoretical view can make clear the many ways that individuals relate with media and technology. Technology covers a wide range from simplistic to complicate. Media is everywhere we look and on every gadget we own. This paper will take a look at mass media from the functionalist, conflict, and interaction perspectives. You can look at a variety of theories and you will find studies and scholars that agree and those who disagree.

Turn in your highest-quality paper
Get a qualified writer to help you with
“ Functionalist, Conflict, and Interaction Perspectives on Mass Media ”
Get high-quality paper
NEW! AI matching with writer

From the functionalist perspective there has been a problem from the start. The problem is the failure to identify and come up with a definition for the actual function of mass media. Also it has been problematic to define what role the mass media plays in various cultures and sub cultures (Mendelshon, H. (1974). From the start a functionalist breakdown comes with a profound handicap.

According to the functionalist perspective the media is a marketing product and entertaining, it is socializing individuals, teaching norms, morals, and philosophies to future groups. Media also keeps individuals in touch with cultural standards in the time if happenings of nationwide importance. The functionalist perspective sees the media as teaching what is virtuous and appropriate (Gamson, Croteau, Hoynes, and Sasson (1992). The media has four essential functions for society: surveying the environment to give reports and information; relaying replies to this information; amusing; and transmitting traditions to upcoming generations.

Advertisements are always shown before movies; it also appears on public transportation and on highway billboards. There is virtual gaming that allows one to talk to friends on social networks. Technology gives individuals and groups innovative and more stimulating ways to stay amused.

Some sociologist affirm that this level of media experience hints to narcotizing dysfunction, a word that defines when persons are excessively overcome with media feedback that they begin to ignore it.

Functionalism has gotten criticism for neglecting the harmful functions of an event such as divorce. Critics also say that the perspective justifies the status quo and satisfaction on the part of society’s individuals. Functionalism does not support individuals in taking a lively position in altering their social environment even if this change could be for the better. Functionalism sees vigorous social change as unwelcome since each part of society will recompense naturally for any troubles that may come to pass.

Conflict theorists see social conflict among any groups in which it is probable for disparity exists: racial, gender, religious, political, economic, and so on. Conflict theorists claim that disparate groups more often than not have contradictory standards and agendas, causing them to vie in opposition to each other. This steady rivalry between groups is the foundation for the constantly shifting nature of society.

Looking at the conflict perspective mass communications study has time after time recognized the major force that the media can have in determining a communal outlook about a certain matter, such as conflict. The media repeatedly helps decide what the public sees the subject, its causes and penalty, whether it is important, and what to assume about it (Reuben, R. C. (2009). The media can have a very influential role in fueling fires when it comes to certain issues like racism and other social injustices.

Conflict like functionalism has been defined in many different ways. When it come to mass media the same can be said. Conflict can also be measured at the individual point and at the group point. Although conflict is regularly important to those involved, it may not always be noticed by the media. The disagreement has got to be remarkable to the picky viewers of the media.

According to the conflict perspective a main emphasis is the variance of avenues to media and technology exemplified in the digital world. Conflict theorist concentrate on who reigns the media, and how the media endorses the norms of the upper-middle-class white Americans while lessening the existence of the lower class especially minorities. Some conflict theorist’s propose that the way media is created causes an uneven political arena. Candidates with the most monies available can buy the most media exposure, trash talk their competition, and take full advantage of their visual existence.

Now days cameras capture our activities and viewers can find people over their cell phones. Social scientists take the idea of the surveillance society so seriously that there is an entire journal devoted to its study, Surveillance and Society (library.queensu.ca).

Influential individuals and social organizations carry much of the say so about what technology is out, when and where it is released and what kind of media is accessible for intake. This is a form of gate keeping. Deciding what story will make the headlines of the front page. Deciding which movie is playing on the screens at the local movie theater. Deciding what movies and pictures will be released and which ones will not. All of these decisions are usually made by people of high standings. No one in the lower classes has any say so in these types of decisions.

Critics of the conflict perspective tip to its excessively harmful view of society. The theory in the end attributes compassionate pains, unselfishness, democratic state, civil rights, and other constructive aspects of society to capitalistic designs to have power over the groups, not to natural wellbeing in maintaining society and social order.

Media can generate and spread symbols that become the way we understand our society. Theorist at work on the interactionist perspective concentrate on this social creation of actuality. This process keeps going and people individually generate and comprehend reality.

Social media sites inspire individuals to check in and give particulars of their day with online social networks, companies can then with no trouble endorse their merchandises on these sites. Then suddenly you are bombarded with ads of places you have been.

What started out as a symbol of popularity and prestige now endorses consumerism of games and fandom. Every website and every game that is played has advertisements that the viewer must watch in order to continue on. This is very similar with the conflict theory.

Sociologists differentiate the mass media from other social associations because for this realm it is a must to have an audience. The audience could be a secondary group assembled in a great theater, or it may be a main group, such as a husband and wife watching the newest movie release at home. Possession is becoming very compacted. There is a trend toward sort of a monopoly. There can be found a few of global organizations that dominate the publishing, broadcasting, and the ﬁlm industries (Croteau and Hoynes 2000). Some individuals reason that the government ought to control media absorption once again. The government takes more of a “hands-off” approach. If this approach continues the trend will continue and the media leaders will continue to grow.

Critics assert that symbolic interactionism leaves out the macro level of social interpretation, which is the big picture. Symbolic interactionists could fail to see the bigger problems of society by concentrating too closely on the small issues. The perspective also gets criticism for denial of the influence of social forces and institutions on individual connections.

The amount of individuals in the world who have admittance to an assortment of media keeps growing. Additionally, the total of time individuals squander taking in media as well continues to enlarge. With all the new technology that is available most people are always connected to something that has media readily available twenty four hours a day, seven days a week. Each viewpoint interprets the position of the mass media in a special way and for this reason each theory is expected to have an effect on the views of individuals that are a piece of the society in individual behaviors. As a functionalist are to be expected to view the program choices of a news group decision maker who knowingly makes the choice to pass over a pessimistic account regarding one of its supporting companies as a not taking sides action intended to lessen likely discord in the union and maybe the community. As an interactionist, would be paying attention to how the results might influence the everyday relations among the members of the business or even among the business and members of the community may be concerned.

On the other hand, a conflict theorist is to be expected to observe this as one of the negative functions of the mass media like Gatekeeping. For that explanation conflict theory explains why news media may stay away from negative stories about their sponsors of their new show and big advertisers in their newspapers. This makes is evident when television networks that are making big dollar amounts for promotion from corporations’ like Nike and other material goods makers are hesitant to broadcast negative media about these companies. Conflict theorist categorize the identical dilemma at the neighboring point everyplace city reporters will not present bad reviews on certain products like franchise restaurants or other local businesses since the bulk of their financial support comes from the paid advertising of these and other businesses.

While media has an impact on society, society has an impact on the media. In fact, with the inventions of such websites and social networks like Facebook and many others individuals in society with this access are just as influential. These social networks have allowed individuals to more and more capable to put forth weight in the other sociological institutions including the mass media. The conflict theory can sometimes see the community as neither here nor there by screening it as just submissively overcome to the forces of the free market, interactionism can lead us into more understanding of how the amplified discussion connections linking character and civilization seeing how the media is very personal to most.

We have seen that there can be some slight similarities connecting the social theories of Functionalism, Interactionism and Conflict Theory. They however disagree somewhat significantly with each other. Mostly depending on what theory a person decides to agree with their view and opinions about the media and other social institutions will vary quite a bit. Just because one individual may view the media with the Conflict lens does not mean that the Functionalism and Interactionism does not make very valid points that can be used to enhance our understanding. Full understanding will not be attained from one theory and it is unlikely that everyone will ever agree on just one theory. The understanding that we have gained is that the media truly has an impact on individuals, cultures, society, and mass communications. It is not just at a local level but at a global level. By studying these theories we can gain insight and understand about each point of view. Each ones has a contribution to share.

Functionalist, Conflict, and Interaction Perspectives on Mass Media. (2016, May 07). Retrieved from https://studymoose.com/functionalist-conflict-and-interaction-perspectives-on-mass-media-essay 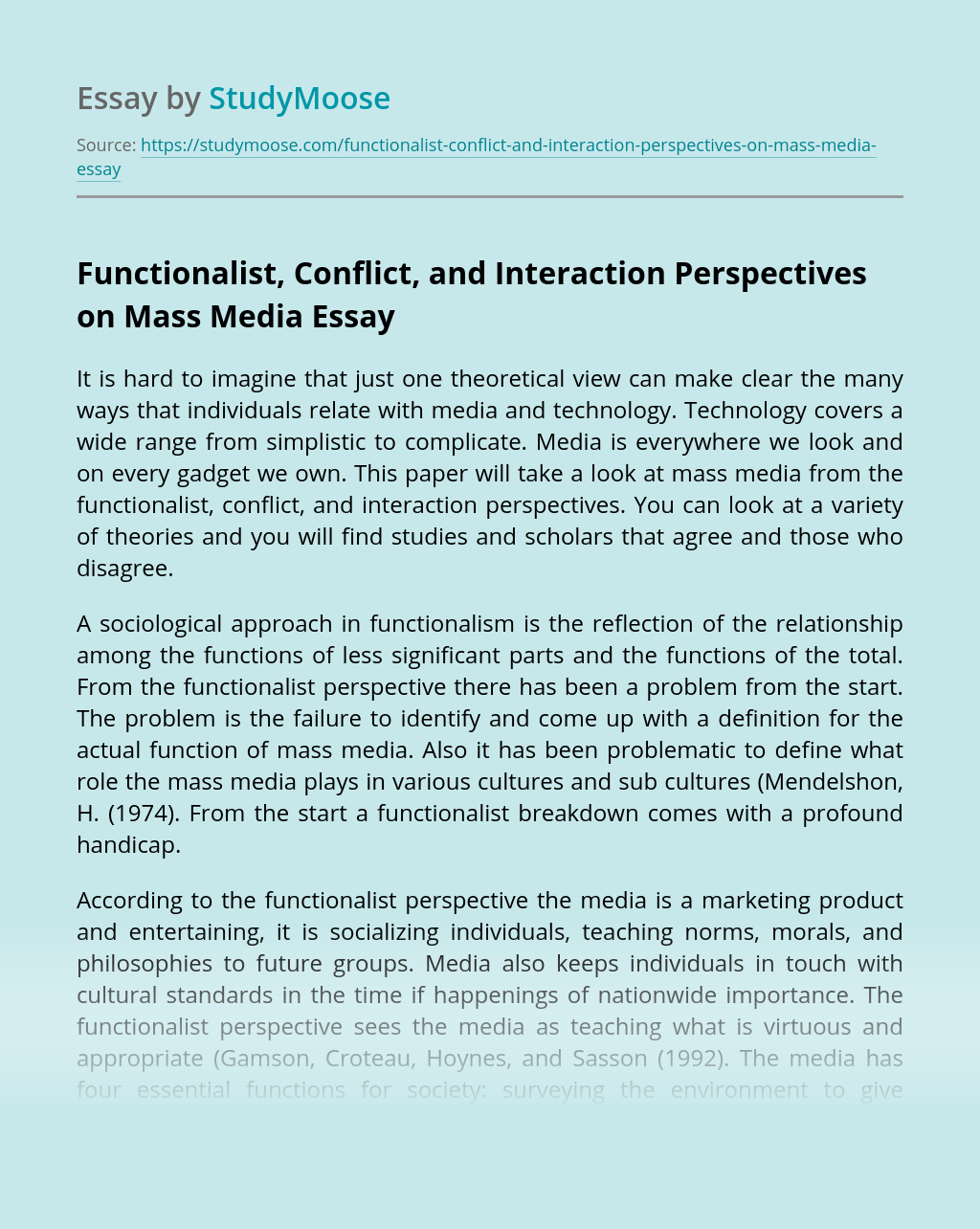 Turn in your highest-quality paper
Get a qualified writer to help you with
“ Functionalist, Conflict, and Interaction Perspectives on Mass Media ”
Get high-quality paper
Helping students since 2015
Stay Safe, Stay Original