Friar Lawrence is to Blame in Shakespeare's Romeo and Juliet

Friar Laurence is the puppet master that’s pulling the strings behind the scenes. Friar Laurence is a Friar and an apothecary in training. He is the one who gave the vial to Juliet, which led to the climax of the play. He also came up with the plans to keep Romeo and Juliet together, such as, “killing Juliet,” until Romeo came and the couple would leave together. Friar Laurence is the most memorable character in the story because he came up with the majority of the plans to keep Romeo and Juliet together, he was sort of responsible for the deaths of a few people, even though Romeo is one of the main characters, a lot of his actions are caused by Friar Laurence.

Don't use plagiarized sources. Get your custom essay on
“ Friar Lawrence is to Blame in Shakespeare’s Romeo and Juliet ”
Get custom paper
NEW! smart matching with writer

Friar Laurence came up with many of the intricate plans that were made to keep Romeo and Juliet together. Act IV, Scene I, Lines 93-98 the text says, “Take thou this vial, being then in bed, And this distilled liquor drink thou off; When presently through all thy veins shall run A cold and drowsy humor, for no pulse Shall keep his native progress, but surcease: No warmth, no breath, shall testify thou livest;” Laurence came up with the fake death scheme that tricked Juliet’s parents into thinking she was actually dead.

Act 3, Scene 3, lines 166-170 the text states, Either be gone before the watch be set, Or by the break of day disguised from hence: Sojourn in Mantua; I’ll find out your man, And he shall signify from time to time Every good hap to you that chances here:” Friar came up with the plan for Romeo to stay in Mantua while staying connected with what’s going down in Verona.

Friar Laurence is the one who is kind of responsible for the deaths of a few people in the play. Act 2, Scene 6, lines 84-88 states, “Draw, Benvolio; beat down their weapons. Gentlemen, for shame, forbear this outrage! Tybalt, Mercutio, the prince expressly hath Forbidden bandying in Verona streets: Hold, Tybalt! good Mercutio! TYBALT under ROMEO’s arm stabs MERCUTIO, and flies with his followers” Since Friar Laurence married Romeo and Juliet, Romeo tries to stop Mercutio and Tybalt from fighting and save them both but led to Mercutio’s death. Act 5, Scene 3, lines 259-264 says, “The noble Paris and true Romeo dead. She wakes, and I entreated her to come forth, And bear this work of heaven with patience: But then a noise did scare me from the tomb; And she, too desperate, would not go with me, But, as it seems, did violence on herself.” Due to Friar Laurence giving Juliet the sleeping potion/fake death potion, Romeo thought she was actually dead and killed himself after killing Paris, Juliet then woke and saw Romeo was dead then killed herself. All of this was caused by Friar Laurence giving Juliet the vial.

Friar Lawrence is to Blame in Shakespeare's Romeo and Juliet. (2020, Nov 23). Retrieved from https://studymoose.com/friar-lawrence-is-to-blame-in-shakespeare-s-romeo-and-juliet-essay 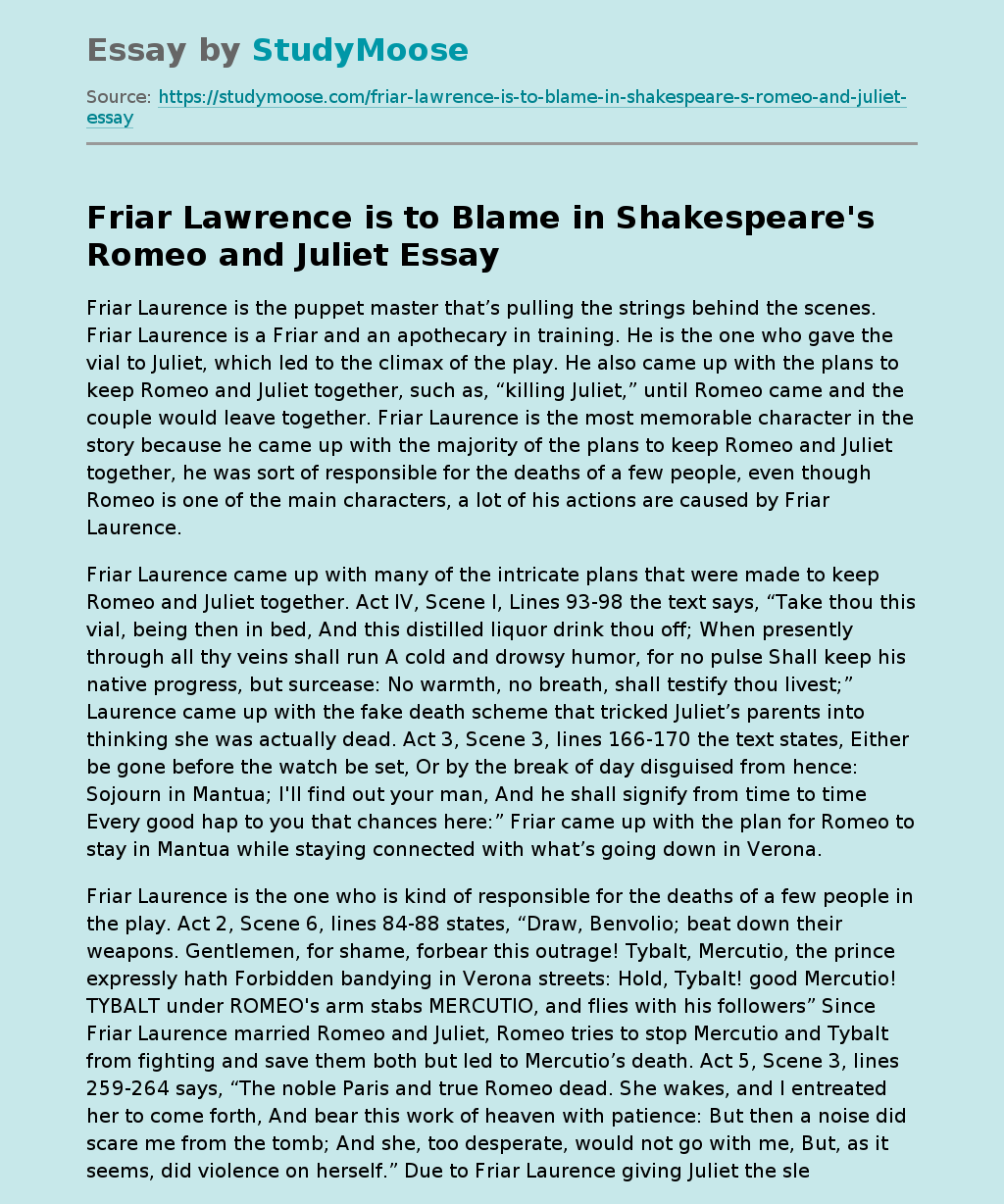