Free university would encourage everyone to attend, and not just those with money. An average public university in Canada costs an average of $6,962 for a Canadian citizen per year. However, for international students the prices are much higher, averaging $27,159 per year. By far not everyone can afford to put out 27,000 dollars every year for their child to go to university. Many talented students who have perfect qualification choose not to attend university by fear of cost. Though only half of university students are in debt, nearly two-thirds of students say they don’t have a parent funded RESP.

Don't use plagiarized sources. Get your custom essay on
“ Free university would encourage everyone to attend and not just those with ”
Get custom paper
NEW! smart matching with writer

And with 80%, or 4 out of 5 parents unable to accurately estimate tuition fees, this adds up to a disaster. A Registered Education Savings Plan is an investment plan available to parents in Canada wanting to save for their child’s post-secondary education. The government of Alberta, on top of the federal government, used to contribute $500 to the investment per year, but phased out the program at the end of July 2015.

The beneficial program now offers 50% less, though education costs keep rising. According to a Bank of Montreal poll, 27% of university students listed paying for school as their biggest worry. The average level of debt by the fifth year of university is $28,858 based on responses from more than 11,000 students. Since the average wage in Canada is $51,000 per year, the debt is 56% of average annual earnings. That is a lot to pay back. Moreover, Munib Sajjad, president of the Toronto University Students’ Union, voices everyone’s growing concern.

“University is getting very unaffordable, and it’s getting worse and worse every year.” On average, tuition fees rise by 3.1% a year. According to Jonathan Black, director of careers at Oxford University, “the introduction of higher fees will create deeper, longer lasting splits in the working population. The privileged will continue to gain a broad education, which will give them choice and control over their careers; the less privileged will focus on expedient, short-term options that will give them narrow training, equipping them for fewer roles, offering ever declining choice in a fast changing world.” Poor students take temporary options that follow not what they want, but what is cheaper to pay for, and what earns more money quicker. “Children from disadvantaged backgrounds are already on average of 4.3 months behind their peers at the age of five, by 11 that gap has increased to 9.5 months, and by the time they leave high school at 18 it has grown to 19.3 months,” reports forbes.com. The findings suggest that underlying social issues are as important as school in helping close the gap. Raising university tuition fees widens the gap even more, decreasing social mobility. Though those from poorer backgrounds are 43% more likely to enter university, despite the rapid rising of tuition fees, compared to 2009, students from more advantaged, well off neighbourhoods are 250% more likely to pursue a post-secondary education. Children from a disadvantaged social spot need great support and encouragement to apply for higher education. In some communities, going to university isn’t the norm. What matters is earning money, the quicker the better. Students from these families feel scared, and all alone. On top of that, universities, the opposite of helping, keep raising education fees, and along with it, stress. Stress student debts have on the body is huge. A survey of over 1,000 student loan borrowers reported that more than 60% of students fear their worries of debt are going out of control, and more than 70% say they are suffering from anxiety headaches. A prominent effect of student debt is losing sleep. Students are stressed, can’t sleep, which leads to damaged health. Loss of sleep leads to lower life quality- poorer performance, higher risk of diseases, and even disorders of mental health. Students reported they have many other symptoms from their stress- muscle tensions, upset stomachs, rapid heartbeat, shortness of breath, tremors, and fatigue. Being under pressure can further cause lack of motivation and focus, anxiety, anger, depression, and isolation. One study from the National Institutes of Health found that stressed out patients have higher cortisol levels in their blood. “High cortisol levels boost the amount of fat around the belly. Extra abdominal fat may increase the risk for diabetes, which in turn may impair the stress response in the brain,” says Antonio Convit, a psychiatrist at the Nathan Kline Institute for Psychiatric Research. “The system that inhibits cortisol in the brain doesn’t work normally in people with type-2 diabetes. These patients also have blunted levels of cortisol when they wake up in the morning, as well as damage to the hippocampus, a brain region with concentrated cortisol receptors that is especially vulnerable to chronic stress.” Stress also makes us more vulnerable to the common cold, research from Carnegie Mellon University shows. The reason also involves cortisol- it suppresses inflammation in a healthy body. However, stress raises cortisol levels, so the immune system grows resistant to the hormone. Inflammation, associated with an appearing cold, goes unnoticed. Such are the effects of student debt, and high university fees. If post-secondary education was free, everybody, no matter their social status, would be able to attend, and student loan stress would be eliminated.

Free university would encourage everyone to attend and not just those with. (2019, Aug 20). Retrieved from https://studymoose.com/free-university-would-encourage-everyone-to-attend-and-not-just-those-with-essay 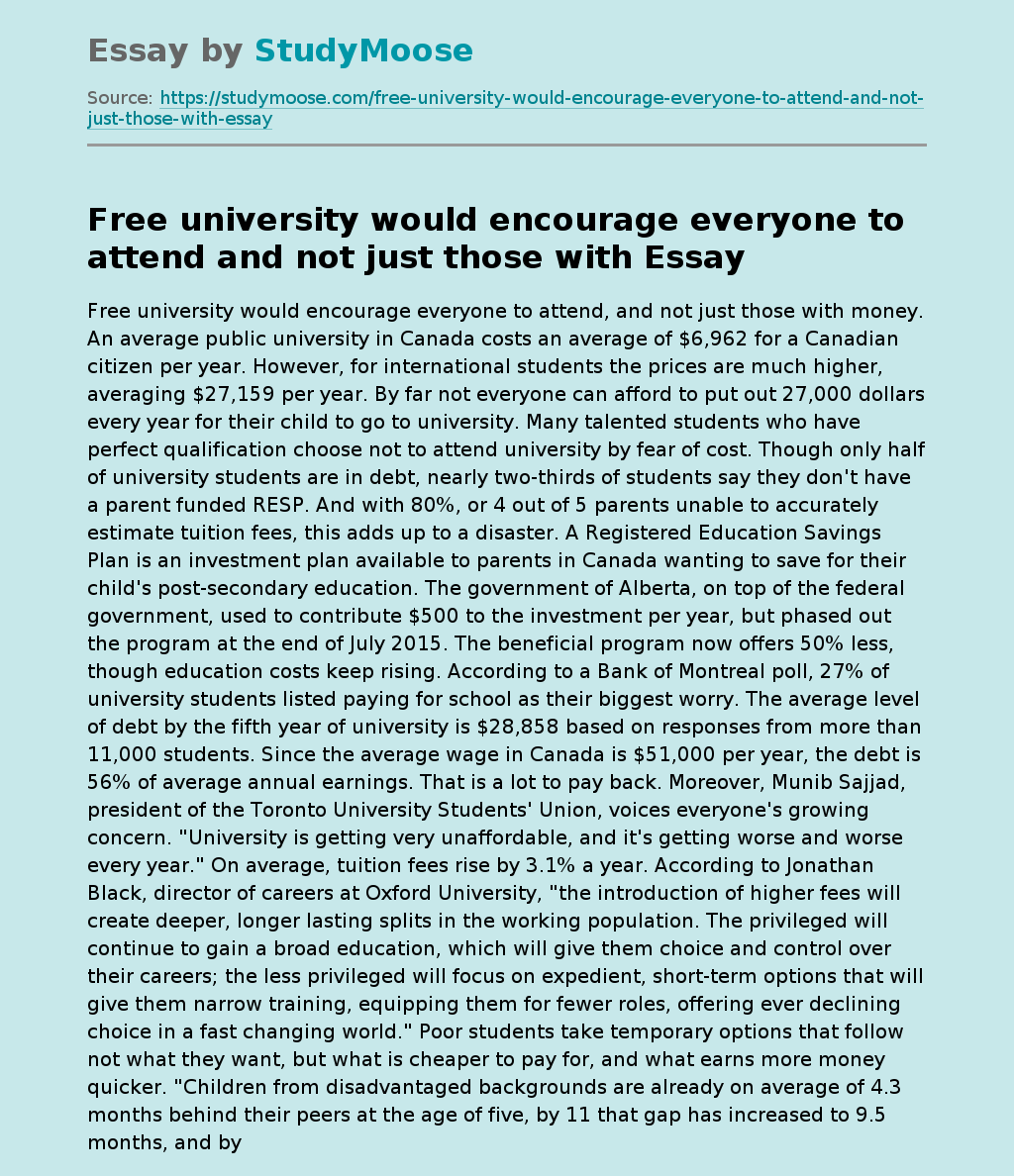