“What he most dreaded, that I most desired.” (Narrative of the life of Frederick Douglass pg.48) Frederick Douglass states that knowledge and literacy are great forms of power. Slaves are considered property and are not treated with respect, and in his novel, Douglass expresses how he was able to overcome the altercations that he had to face contrasting it with how important it is to be literate. From being a former slave for life, to the education that his masters revoked from him, this man’s life was filled with hardships.

Don't use plagiarized sources. Get your custom essay on
“ Frederick Douglass: Biography, Life and Facts ”
Get custom paper
NEW! smart matching with writer

In this novel, Douglass expresses the importance of knowledge by describing how he was able to learn, read, and write ,also what he discovered by becoming literate.

This essay focuses on the ways literacy played an important role in his life, how knowledge can occasionally make you feel badly, and how knowledge being suppressed from those who are slaves affected the running of the slave system in the United States.

“There can be no freedom without education.” This sentence was written by a slave named Fredrick Douglass. During slavery, “masters… keep their slaves thus ignorant” (Narrative of the life of Fredrick Douglass pg.19) therefore, to keep them from rebelling against their owners and causing chaos throughout the south. Douglass writes how he was unable to continue receiving the education that his mistress started to provide him with because her husband instructed her to do otherwise. “A nigger should know nothing but to obey his master-to do as he is told to do.

Learning would spoil the best nigger in the world. If you teach a slave how to read, they would become unmanageable and have no value to his master.” (Narrative of the life of Frederick Douglass pg.47)

The mistress’ husband understood that by maintaining slave’s grasp of knowledge the owners will constantly have them under control. If slaves were informed that there was something called abolition which would provide them with freedom, then they would cease to stay on the land of their owners, and even more importantly, not allow their owners to own them and rebuttal. But something happened in Douglass’ life that assisted him to chase after the power of knowledge. With the sudden change of his mistress treating him as a man of no rights from previously portraying him as an equal caused an upset to the slaves owned by her husband. Douglass, however, started to discover what potential his knowledge could actually do for him. He states, “Nothing seemed to make her more angry than to see me with a newspaper. She seemed to think that here lay the danger” (Narrative of the life of Frederick Douglass pg.51) By Douglass being capable of reading he realized the more he read “the more I was led to abhor and detest my enslavers.” (Narrative of the life of Frederick Douglass pg.53) Douglass’ literacy allowed him to understand what freedom is and his “determination to be free” (Narrative of the life of Frederick Douglass pg.81) only continued to grow. Frederick Douglass’ life was affected poorly by being literate at first. By reading different literature pieces like The Columbian Orator, Douglass discovered that there was a hope for him to become a free man. However, “Learning to read had been a curse rather than a blessing.” (Narrative of the life of Fredrick Douglass pg.53)

Douglass displays how terrible he feels for not being able to do anything to free himself. He sometimes wishes that he was as ignorant as his fellow-slaves, who were used to their condition of not being aware that there was something that could potentially bring them freedom. He states, “I was broken in body, soul, and spirit. My natural elasticity was crushed, my intellect languished, the disposition to read departed, the cheerful spark that lingered about my eye died; the dark night of slavery closed in upon me; and behold a man transformed into a brute!”(Narrative of the life of Frederick Douglass pg.73) These statements Douglass shows how the idea of freedom tormented him and turned him violent. Being so close, but yet so far from freedom causes him to suffer. The knowledge which he has acquired is of no use when he is a slave and seems to be a useless attribute. However, Douglass does in fact “finally succeed in making…escape from slavery” (Narrative of the life of Frederick Douglass pg.103) his freedom allows him to speak his mind and put his knowledge to good use.

Every master was well aware that they needed to know almost everything, and the slaves had to know almost nothing. This would allow the slave owners to not worry about a revolt against them, since education was not offered nor was it allowed on the slaves own time to partake in learning. The slaves were convinced that “a still tongue makes a wise head” (Narrative of the life of Frederick Douglass pg. 34) since that was what they were told to think. By slaves having no education and no opportunities to speak freely the slave system flourished. “A single word from the white men was enough-against all our wishes, prayers, and entreaties-to sunder forever the dearest friends, dearest kindred, and strongest ties known to human beings.” (Narrative of the life of Frederick Douglass pg.58)

Frederick Douglass: Biography, Life and Facts. (2016, May 13). Retrieved from https://studymoose.com/frederick-douglass-biography-life-and-facts-essay 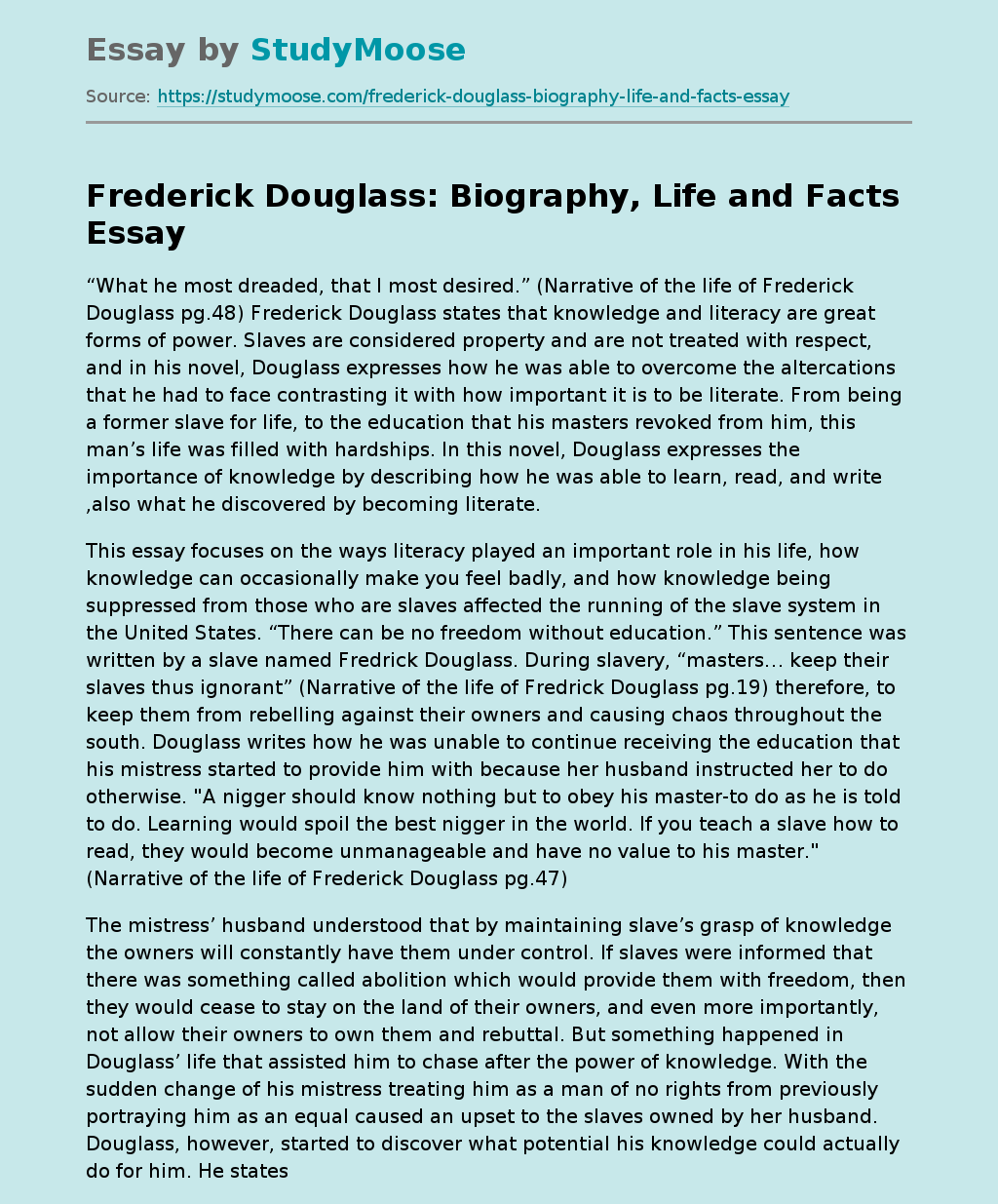