For centuries women have been forced to be subservient to man and his demands. Their lives, jobs, personalities, traits and emotions are portrayed in stories, novels, and poems to be less admirable than those of a man. While in reality this is untrue, the period in which Mary Shelley lived treated women in that manner. The feminist movement questioned the chauvinism of man, and the rights belonging to women, a movement that later ensured female emancipation. Mary Shelley shows the subjection of women throughout her novel, Frankenstein , and this leads the reader to question the social construct of the woman’s place, and the stereotypes set against her.

Don't use plagiarized sources. Get your custom essay on
“ Frankenstein & Gender Roles ”
Get custom paper
NEW! smart matching with writer

Justine is a passive, character, tossed between her family and the Frankenstein family. Accused and placed on trial for the murder of William Frankenstein, Justine remained serene and unperturbed throughout her trial . In her own words, she explained “God knows how entirely I am innocent.

But I do not pretend that my protestations should acquit me; I rest my innocence on a plain and simple explanation of the facts.” Her speech and actions demonstrate passivity. She defends herself, but only to the point of denying the act of murdering the young boy. The act of her being framed helps prove her apathetic characteristics. Again she goes on to say “But I have no power of explaining it. I am only left to conjecture concerning the probabilities by which it might have been placed in my pocket”.

This finalizes Justine role, leaving her to become a victim of circumstance, who quietly accepts her fate, a fate which she does not deserve. Mary Shelley has constructed a character who represents the conventionalized 18th century female  appearance, specifically that of a domesticated passive woman. In doing so she depicted one of the female gender roles implemented by society, a role of passivity. The read is aware of Justine’s innocence and they are therefore led to question her actions in submitting to a false verdict. This trait of capitulation is characterized as one that has the potential to cause chaos, and is therefore regarded as bad. Mary Shelley questioned society’s implementation of a female gender role through the creation of a situation which led the reader to a verified conclusion as to why the trait is despicable.

Elizabeth is a character who represent the 18th Century female figure.  In Frankenstein it was stated “I have a pretty present for my Victor, tomorrow he shall have it” in reference to Elizabeth, an orphan adopted by Victor Frankenstein’s mother (Shelley, 30). Victor Frankenstein is given Elizabeth as a gift without any consideration towards her feelings or consent, portrayed as an object, easily traded about. Victor then goes on to say “I looked upon Elizabeth as mine, mine to protect, love and cherish. All praises bestowed on her I received as made to a possession of my own” (Shelley, 31).  The idea that women are mere objects of possession is highly emphasized in this passage, aiding the reader to see how not only marriages but also confrontations occurred during the 18th century. They do not receive the same freedoms as men to travel and roam, taking an example Elizabeth’s statement in which she’ regretted that she had not the same opportunities of enlarging her experience and cultivating her understanding’ . After a series of events the reader arrives to the apogee of the wretch’s actions in which he murders Elizabeth.  Victor Frankenstein’s egotistical idea in which he persists in the stubborn belief that women should not engage in men’s affairs caused Elizabeth’s death.

“I will confide this tale of misery and terror to you the day after our marriage shall take place; for, my sweet cousin, there must be perfect confidence between us“ , this is a clear statement showing the lack of trust that Victor has for Elizabeth. Delving further into this sole idea, Wollstonecraft Shelley wrote in Vindication of Women’s Rights ‘ marriage is the only way women can rise in the world” . Mary Shelley’s use of the situation in which Victor does not trust Elizabeth, supports her mother’s claims. Elizabeth is seen by Victor as an untrustworthy person, only marriage will allow Elizabeth to gain trust from Victor and other dominant male figures. This however is not only in the Frankenstein but also in the 18th century time period.  In retrospect the reader rejects the idea, since it ultimately leads to the death of Elizabeth. Had Victor confided in her, she may have been able to survive the wretch’s attack on her life. Mary Shelley once again questioned the possibility of the implementation society’s gender roles upon women through the creation of Elizabeth Frankenstein.

In contrast to the pattern of gender inequality and political injustice, the DeLacey family represents an alternative ideology. This ideology is a a vision of the egalitarian-family, incorporating gender equality, and mutual affection from both sexes. Felix willingly gives up his own welfare and being so as to ensure the safety of the Turkish merchant. Safie is the daughter of the Turkish merchant, she is a character who counters the Islamic oppression of women that is endorsed by her father. Safie’s Christian mother instructed her ‘to aspire to higher powers of intellect, and an independence of spirit, forbidden to the female followers of Mahomet’.

The idea that Safie’s embodiment of a empowered woman would cause conflict in the society, is constructed on mere theory. In Frankenstein  we can see the state of the family before her arrival “He was always the saddest of the group; and, even to my unpracticed senses, he appeared to have suffered more deeply than his friends” (Shelley 192). However with her arrival the attitude of the entire family changed from one of depression and sadness to that of joy.

The construct of society’s gender roles is challenged with the introduction of Safie, a brief interlude and suggestion of a possible gender equal society, without any infraction on the peace and tranquility of the community. Jane Austen once wrote “I hate to hear you talk about  all women as if they were fine ladies instead of rational creatures. None of us want to be calm waters all our lives”.  This helps to sum up the possible mention of the need for the emancipation for women throughout Shelley’s book. We are introduced to varying female roles throughout the book, from Elizabeth to Safie, the “gender roles” have varied in empowering one character while leaving the other to be the representation of the “times”. The female character Shelley has has created a novel that represents the need for change concerning societies bigotry and inequity towards women. 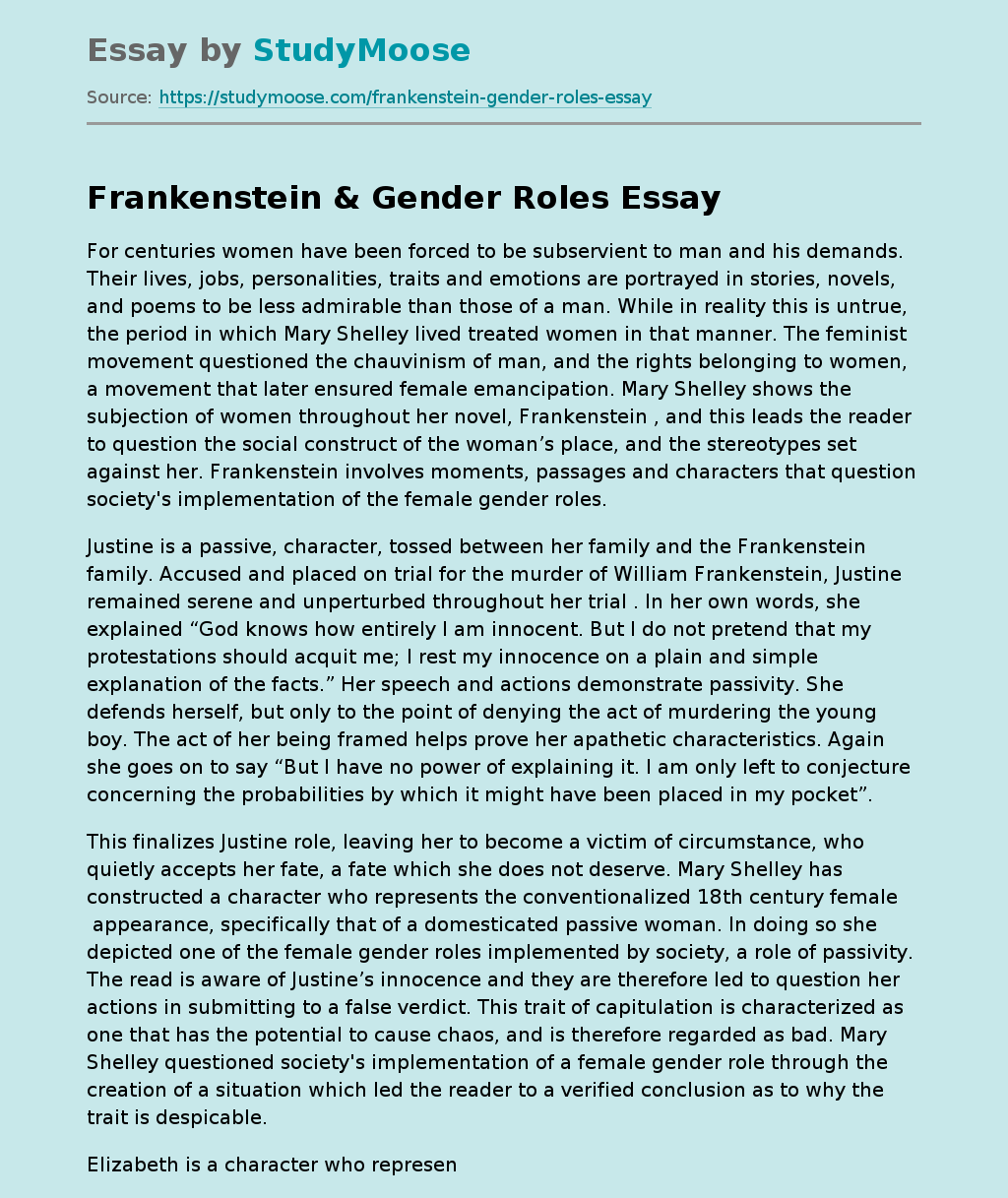