What is life? What defines a person? Do you believe humans should have the right to create life? Are there any consequences? In 1831 Mary Shelly wrote Frankenstein or; The Modern Prometheus, a magnificent depiction of a man taking up God’s role of creator of life. Victor wanted to achieve biological immortality. Yet, within the instance of success Victor outright rejected his creation as “monstrous”, a unit for being unworthy of human life. In this paper, I argue that Frankenstein and the idea cloning have a lot in common, because the two topics share pros and cons on behalf of their out coming result.

Don't use plagiarized sources. Get your custom essay on
“ Frankenstein and Human Cloning ”
Get custom paper
NEW! smart matching with writer

Victor Frankenstein’s monster compared to cloning takes place without the act of a sexual union between a male and female. In general, cloning is the modern Frankenstein, just like Frankenstein is the modern Prometheus. Prometheus stole fire from the Gods; he had taken something that did not belong to the humans and given it to mankind and was essentially punished for his actions.

In the same way, Victor Frankenstein lets his ambition overpower him. Victor took from God what was not his, and created a destructive monster in effect of his strong desire for creating human life.

Human cloning is also a controversial subject stating that humans have no power by Gods to develop life or control death. According to the Human Genome Project, there are three types of cloning: DNA, therapeutic, and reproductive cloning. DNA cloning involves transferring DNA from a donor to another organism.

To make his creature, Victor Frankenstein raided grave yards and spent a lot of his time in slaughter houses as well as dissecting rooms to borrow body parts from the dead to use for his creature. Cloning in relation to Frankenstein also uses the process of borrowing; by obtaining genetic materials from embryos to make identical duplicates. With all the allusions to fire and electricity found throughout the novel, to both “spark” and “glimmer” give the reader clues as to how Frankenstein used electric currents to stimulate the patched together dead body of his monster. Comparatively, cloning also employs the use of electricity to promote the division of cells also known as life.

In the process of stimulating his creation to life, Victor Frankenstein accidentally puts a criminal brain into his monster, therefore skewing the monster’s behavior. Cloning is often unsuccessful. According to the Human Genome Project, it takes sometimes “100 attempts to create one successful clone”. Frankenstein’s monster had all components and feelings of a human being, but was not born out of a woman’s womb and was not sexually produced. The creature was created not in God’s image, but in Victor’s image.

Today’s cloning process, like the methods of creating life used by Dr. Frankenstein, arouses a controversy of morals and ethics from religious viewpoints. Cloning has a lot to do with the desires of man. Frankenstein desired to create life. Desires, otherwise known as temptations in these cases, bring us to a great fault. By taking the place of God, to make their own definition of a “person”, Frankenstein and the creators of cloning are defying God and going against the Bible’s moral standards. In defining life we get a deep look into how Frankenstein and cloning compare. They are very alike in many ways. These things teach us that life and the universe are unknowable, and are not meant to be completely known. We are not meant to become boundless creators. Rather, we are the created – created by God. 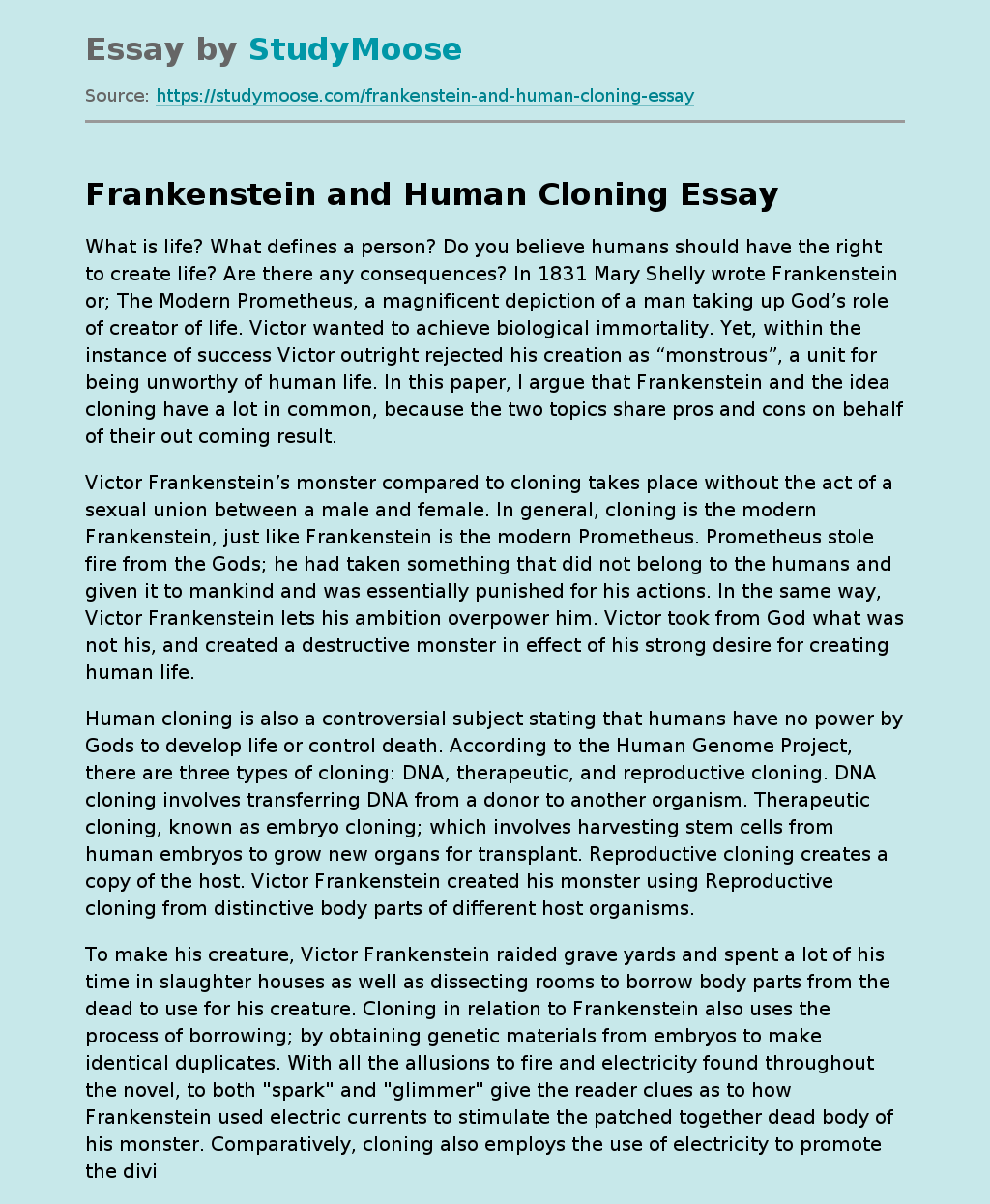