Mankind throughout its history always made many different discoveries. People are very curious creatures, and they always want to learn something new. Mary Shelley in her novel Frankenstein refers to human curiosity and the acquisition of knowledge. Almost every character in this novel is a very curious person. Robert Walton wanted to explore the North Pole, the Creature tried to learn more about everything that surrounded him and, finally, Victor Frankenstein was absorbed in science, he wanted to create a human being, and he did it.

Don't use plagiarized sources. Get your custom essay on
“ Human curiosity in “Frankenstein” ”
Get custom paper
NEW! smart matching with writer

First of all it is necessary to understand what curiosity is and why people are curious.

The definition in any dictionary describes curiosity as “a strong desire to know or learn something”. (Oxford English Dictionary) People start to learn everything about the surrounding world from their childhood and never stop it. But why are people curious from their childhood? The evolution of all living creatures is determined first of all by changes in the environment and changes in the living conditions of living creatures.

The peculiarity of the existence and the evolution of rational beings is a fact that they are reasonable and they are very curious; therefore, these creatures always want to improve their living conditions.

However, only human beings are rational beings on the planet Earth. Therefore, curiosity is one of the main parts of the human nature, and that is why people are curious. Mary Shelley describes this part of human nature in her novel, and she begins with Robert Walton. Robert Walton was a self-educated man who sought knowledge from his expedition to the North Pole. As the leader of an expedition, Walton was responsible for the lives of other people, and, therefore, he had to protect them.

According to the “Mary Shelley’s Frankenstein” movie, Walton’s people died, but Robert did not pay attention to their deaths and forced his people to keep moving forward, neglecting the fact that they all could die, but as the leader of the expedition, Walton was responsible for lives of each person in his ship and had to think about them. Walton changed his mind after Victor Frankenstein told his story. If Frankenstein did not tell his story, Walton’s expedition could lead to the bad consequences, even though his discoveries were good for the mankind, and, therefore, the acquisition of knowledge, in this case, would be a curse.

The next very curious character is the result of Victor Frankenstein’s experiments, the Creature, and he was the most curious character in Shelley’s novel, because at the beginning after his creation he was like a child, he did not know anything in this world, and everything was new for him. The Creature started to learn everything about the surrounding world. One of the greatest discoveries was human speech. It was a “godlike science” for the Creature, and he “ardently desired to become acquainted with it”. (Mary Shelley, Frankenstein, p. 5) It led to other discoveries, because the Creature was curious. He watched the De Lacey Family and he wanted to “discover the motives and feelings of these lovely creatures”. (Mary Shelley, Frankenstein, p. 77) The Creature learned more and more from this family, he learned a lot about feelings and emotions, about love and kindness, and it finally led to bad consequences. The Creature discovered new thing that people called companionship, and understood that he was alone and nobody cared about him. Every living creature needs a companion in his life.

Mary Shelley even started her novel with this idea; Robert Walton wrote to his sister that he needs friend, that “when [he is] glowing with the enthusiasm of success, there will be none to participate [his] joy”. (Mary Shelley, Frankenstein, p. 10) The Creature tried to communicate with the De Lacey Family, but they rejected him, and he finally understood that he could not find companionship among the human beings and that he will be alone forever; and it completely changed the Creature’s mind. “The mildness of [the Creature’s] nature had fled, and all within [him] was turned to gall and bitterness”. (Mary Shelley, Frankenstein, p. 5) He vowed vengeance to all mankind. Therefore, curiosity led to the bad consequences. The Creature turned Frankenstein’s life into hell, killing people that were dear to him, and, therefore, the acquisition of knowledge, in this case, is a curse. Finally, the third very curious character is the doctor Victor Frankenstein.

He was interested in the sources of the human life; he started to learn chemistry and physiology. Frankenstein wanted to discover how to create a human being invincible to all but a violent death, and finally he made a great discovery that made him “capable of bestowing animation upon lifeless matter”. Mary Shelley, Frankenstein, p. 30) The idea of creation “happy and excellent natures” (Mary Shelley, Frankenstein, p. 30) completely absorbed him. It was like a hurricane, he wanted to learn more and more about the creation of the human being, and he could not stop it. It became a passion, and Victor could not resist it. He worked day and night to implement his ideas, violated all the principles of human morality. Absorbed in his passion, he lost all his feelings, neglected all normal human desires, he even forgot about one of the most important human’s necessity – the communication.

He forgot about his friends and even about his family. Absorbed in his work, Frankenstein did not realize that his friends and relatives worried about him. The only thought that completely absorbed his mind was a goal that he defined for himself. He became the slave of his desires, and finally he created the Creature. However, it did not lead to any good consequences; on the contrary it led to very bad consequences, such as deaths of many people; it inflicted suffering on the Creature, Frankenstein, and many other people. Therefore, human’s curiosity, in this case, was a curse.

After reading Mary Shelley’s novel it seems like human’s curiosity always brings misery. However, curiosity has a good side too. As was written above, people are curious and they always want to improve their living conditions. Curiosity led the primitive people to overcome the fear to approach fire, and people understood that the fire is not only destruction, but also is a light source and protection from carnivores in the night, and a heating when it is cold. Moreover, after tasting burnt meat people learned how to use fire for cooking. Because of curiosity men went away from their homes and discovered new lands.

It led to discovering new resources; people discovered new lands with better conditions for existence. The desire to understand how a bird feels in a flight prompted people to create aircrafts and eventually brought mankind into space. Nowadays technological progress makes people’s lives easier. People in different parts of the world can communicate with each other in real time. Doctors are now able to cure people of many diseases that in former times were fatal for people, and all these good things are available to us because of human curiosity.

It is possible to enumerate the facts about goodness of curiosity for a long time, because initially the basis of any scientific study is the curiosity and the desire to understand incomprehensible phenomenon, and then scientists use their acquired knowledge for the welfare of the people. However, sometimes these discoveries lead to bad consequences. Curiosity led people to invent different types of weapon. One of the bad consequences of the human curiosity was a creation of a nuclear weapon. In 1945 the United States conducted two atomic bombings against the cities of Hiroshima and Nagasaki in Japan.

However, these bombs were not the goal of the first scientists that worked on studying of nuclear physics. There were scientists that were engaged in the nuclear physics as a fundamental science. Their goal was to study the structure of a matter. They wanted to understand one of the greatest mysteries of our nature – the possibility of transforming one element into another. Also, they wanted to get the source of energy through these transformations. Their goal was just a scientific knowledge about our world, and they did not think about possible consequences of their researches and discoveries.

There were scientists that consciously considered the possibility of using energy of the nuclear transformations for creating terrible weapon. There are scientists for whom the study is just the knowledge about our world and the way to make our life better, but, unfortunately, there are scientists that use this knowledge not for the benefit of the humanity, as it was originally intended. An important condition of the development of the human civilization is to create some kind of a filter that allows a scientist to satisfy his curiosity, but cuts off any attempt to use the result of his work to the detriment of humanity.

Human curiosity has to be controlled. Ideal people’s mind should be above their emotions. People should use their reason when they make discoveries, and if their discoveries can lead to bad consequences, stop it at the beginning. For example, Robert Walton really wanted to explore the North Pole and at the beginning of his journey hid did not think about his people. However, after Frankenstein told his story, Walton changed his mind; he understood that his curiosity could lead to the bad consequences as Frankenstein’s curiosity did. That is why Walton ordered to turn back and go home. People are very curious creatures by their nature.

Mary Shelley described in her famous novel Frankenstein the consequences of human curiosity, which were often bad. It seems that curiosity brings misery. However, curiosity also brings many good things. Curiosity makes people’s lives much easier, curiosity improves the living conditions of living creatures. However, sometimes curiosity indeed leads to very bad consequences. The example of it is the terrible incident that took place in 1945 in Japan cities, Hiroshima and Nagasaki. Therefore, human curiosity is both, a curse and a blessing. However, if people control their desires and use their reason, curiosity will become only a blessing. 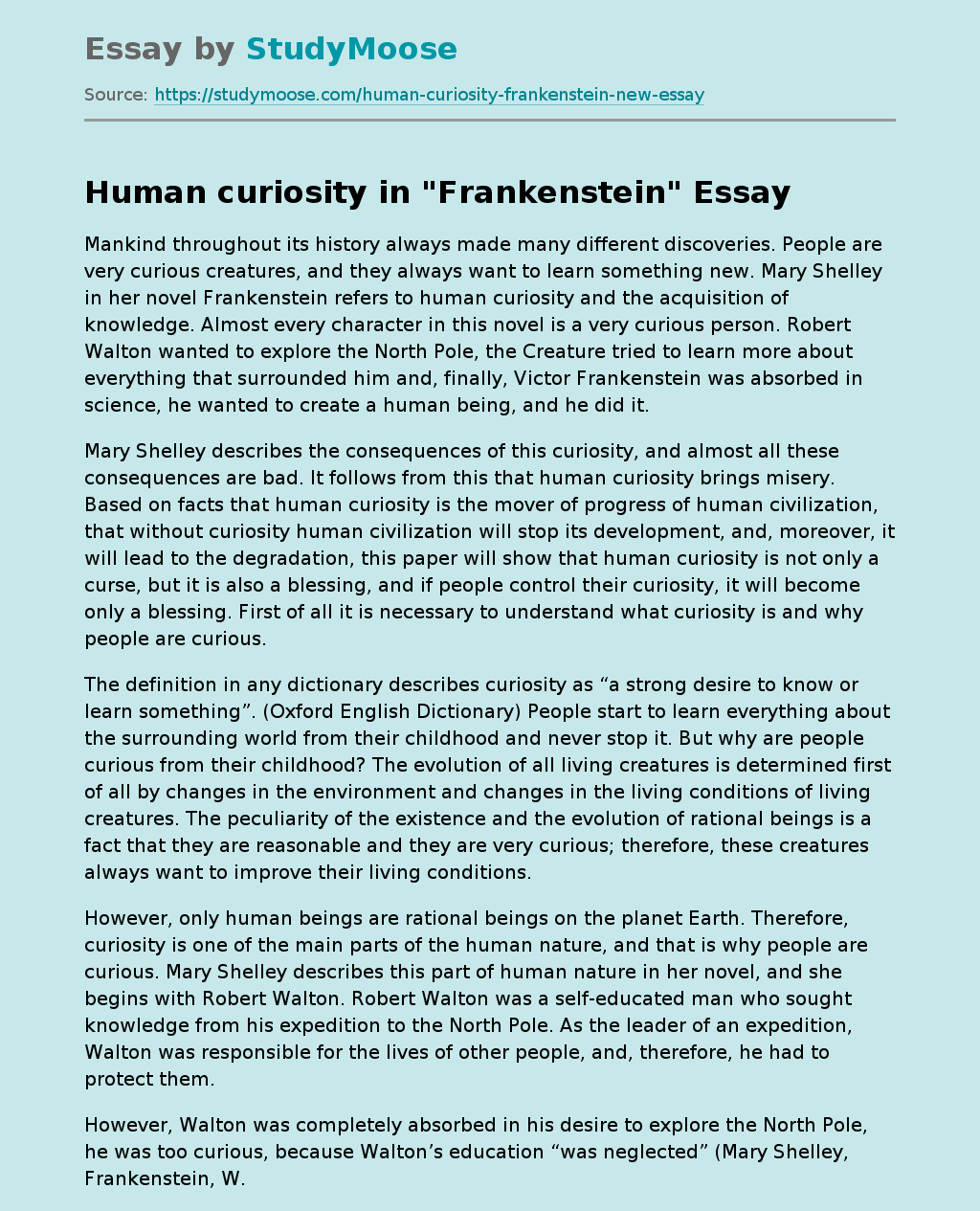