Curiosity; the desire to know or learn something, create; to bring into existence, these are the definitions of the terms curiosity and create. Curiosity has revealed itself in many ways; Benjamin Franklin with the Kite to prove lightning consisted of electricity. When Columbus discovering the North American continent. Most of the discoveries made were because of the curiosity of man. With that curiosity we tend to develop creation, like the creation of light, automobiles, and most of the medicines.

However while creating positive materials with our curiosity; we also have made some designs that would hurt ourselves.

Don't use plagiarized sources. Get your custom essay on
“ Curiosity Definition and Meaning ”
Get custom paper
NEW! smart matching with writer

I would like to discuss how curiosity and creation has both helped mankind and hurt it at the same time. If we were to compare and contrast ourselves now to the Stone Age it would be an exemplary example of where our curiosity and creation has led us over the past several thousand years. What ideas did we not have during the Stone Age that we have today? Well for one the thought of transportation, we went from walking to being able to use not drive at 50mph, but being able to fly at about 2000mps.

Leonardo Da Vinci was curious about how man would be able to fly across the skies, thus his notes led to the Wright brothers and their experiments which gave us the first “airplane”. Now we are able to fly globally, and even on an hourly basis. The curiosity of Rockets was thought about originally by the Chinese in the early 1500’s, it is their curiosity that has led us to be able to go into outer space.

We have created Rockets that can go for millions of light years away, and take us back and forth from the moon.

Using these very examples of how our curiosity and creation has benefited mankind, here are the ways that same curiosity has hurt mankind. Our ability to transport ourselves in large scale manners has allowed increased terrorist to invade countries. Transportation of drugs and weapons is now in the hands of everyone. Rockets are not only made for travel but destruction, we use rockets to destroy and kill hundreds of people, and sometimes that destruction leads to the millions of deaths globally.

Our curiosity has leaded us to create things that have been both constructive and destructive. This destruction has affects not only ourselves but also to the things around us. The death of humans is the tip of the iceberg when it comes to how these same things have been destructive to our environment both living and deceased. As far as creativity in general it’s very similar to a coin, where there are benefits there are also negatives. “One man’s tool can be another man’s weapon” is a quote that relates directly to creation and curiosity.

There is a positive side, but there is also a negative side that goes along with that. Creation and curiosity as stated has both benefited and hurt us in many ways. Too much of anything is bad is a common phrase used in these kinds of situations, and it’s the best applied when it comes to the limits of creation and creativity. So to answer how creation and curiosity has helped and hurt us, most times something is created, there is usually positive and negative along with it. 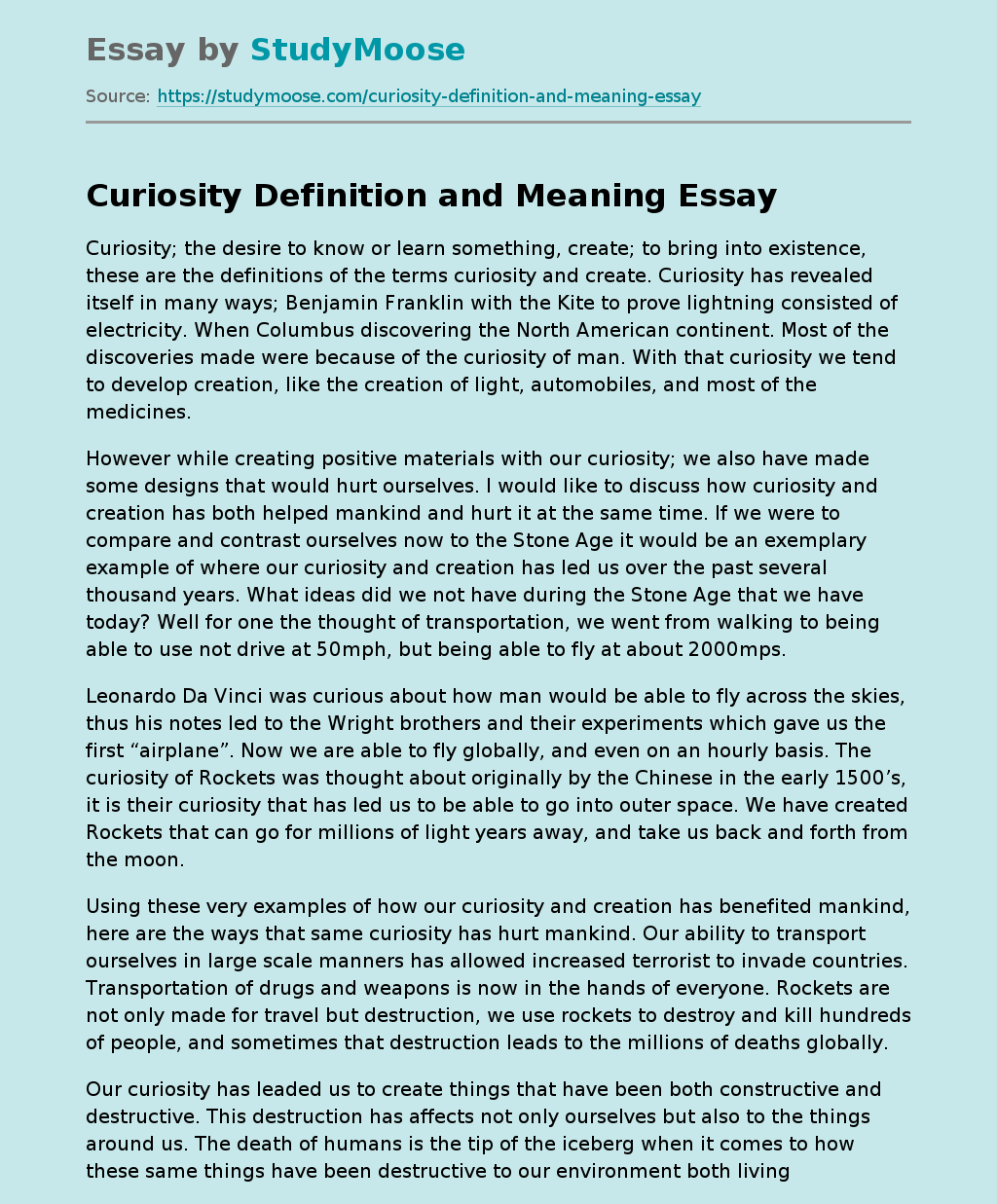