The State Is a Necessary Evil

State, can be defined in political science, as generally a group of people inhabiting a specific territory and living according to a common legal and political authority; a body politic or nation. In this definition, the term state includes government; in another usage, the two terms are synonymous. [Microsoft ® Encarta ® 2009. © 1993-2008 Microsoft Corporation. All rights reserve]. George Washington said that government is not reason government is not eloquence. It is force and, like fire, it is a dangerous servant and a fearful master.

Don't use plagiarized sources. Get your custom essay on
“ The State Is a Necessary Evil ”
Get custom paper
NEW! smart matching with writer

The above statement under discussion can be obtained or deduced from Thomas Pain quoted “Society in every state is a blessing, but government, even in its best state, is but a necessary evil; in its worst state an intolerable one; for when we suffer or are exposed to the same miseries by a government, which we might expect in a country without government, our calamity is heightened by reflecting that we furnish the means by which we suffer” [Thomas Paine, Common Sense 1776].

This necessity however exists; and the problem to be solved is, not what form of Government is perfect, but which of the forms is least imperfect. Thomas Jefferson said in his first inaugural address (March 4, 1801) that a wise and frugal government… shall restrain men from injuring one another, shall leave them otherwise free to regulate their own pursuits of industry and improvement, and shall not take from the mouth of labor the bread it has earned.

This is the sum of good government. “Why has government been instituted at all?

Alexander Hamilton, a federalist said the passions of men will not conform to the dictates of reason and justice without constraint. Government is instituted for the common good; for the protection, safety, prosperity, and happiness of the people; and not for profit, honor, or private interest of any one man, family, or class of men; therefore, the people alone have an incontestable, unalienable, and indefeasible right to institute government; and to reform, alter, or totally change the same, when their protection, safety, prosperity, and happiness require it [John Adams, Thoughts on Government 1776].

Its necessity can be shown even if we assume that, because of their (the people’s) gentleness, or angelic goodness, nobody ever harms anybody else. In such a world there would still be weaker and stronger men, and the weaker ones would have no legal right to be tolerated by the stronger ones, but would owe them gratitude for their being so kind as to tolerate them.

Those (whether strong or weak) who think this an unsatisfactory state of affairs, and who think that every person should have a right to live, and that every person should have a legal claim to be protected against the power of the strong, will agree that we need a state that protects the rights of all [http://www. liberalsindia. com/introduction/liberalpositionpapers/liberalpositionpapers2. php]. “If men were angels, no government would be necessary. If angels were to govern men, neither external nor internal controls on government would be necessary.

In framing a government which is to be administered by men over men, the great difficulty lies in this: you must first enable the government to control the governed; and in the next place, oblige it to control itself. ” – James Madison, Federalist No. 51 February 8, 1788 Why then is government a necessary evil? Its necessity has been explained but why is it then evil? Government is a form of insurance for society. It regulates and promotes social contracts (I won’t kill or steal from you if you promise not to kill or steal from me).

Without government, there would be no society. Too much government and you have no freedom making it a necessary evil. Furthermore, It is easy to see that the state must be a constant danger, or (as I have ventured to call it) an evil, though a necessary one. For if the state is to fulfill its function, it must have more power at any rate than any single private citizen or public corporation; and although we might design institutions to minimize the danger that these powers will be misused, we can never eliminate the danger completely.

On the contrary, it seems that most men will always have to pay for the protection of the state, not only in the form of taxes but even in the form of humiliation suffered, for example, at the hands of bullying officials. The thing is not to pay too heavily for it. Thirdly, when two or more people live in the same area they must agree somehow to limit their rights where rights overlap. For example, water must be shared. They do this because the blessings of cooperation are better than the loneliness of rights. Then come the misunderstandings: some people never learn to understand rights, they think it’s winner take all.

The State Is a Necessary Evil. (2016, Oct 28). Retrieved from http://studymoose.com/the-state-is-a-necessary-evil-essay 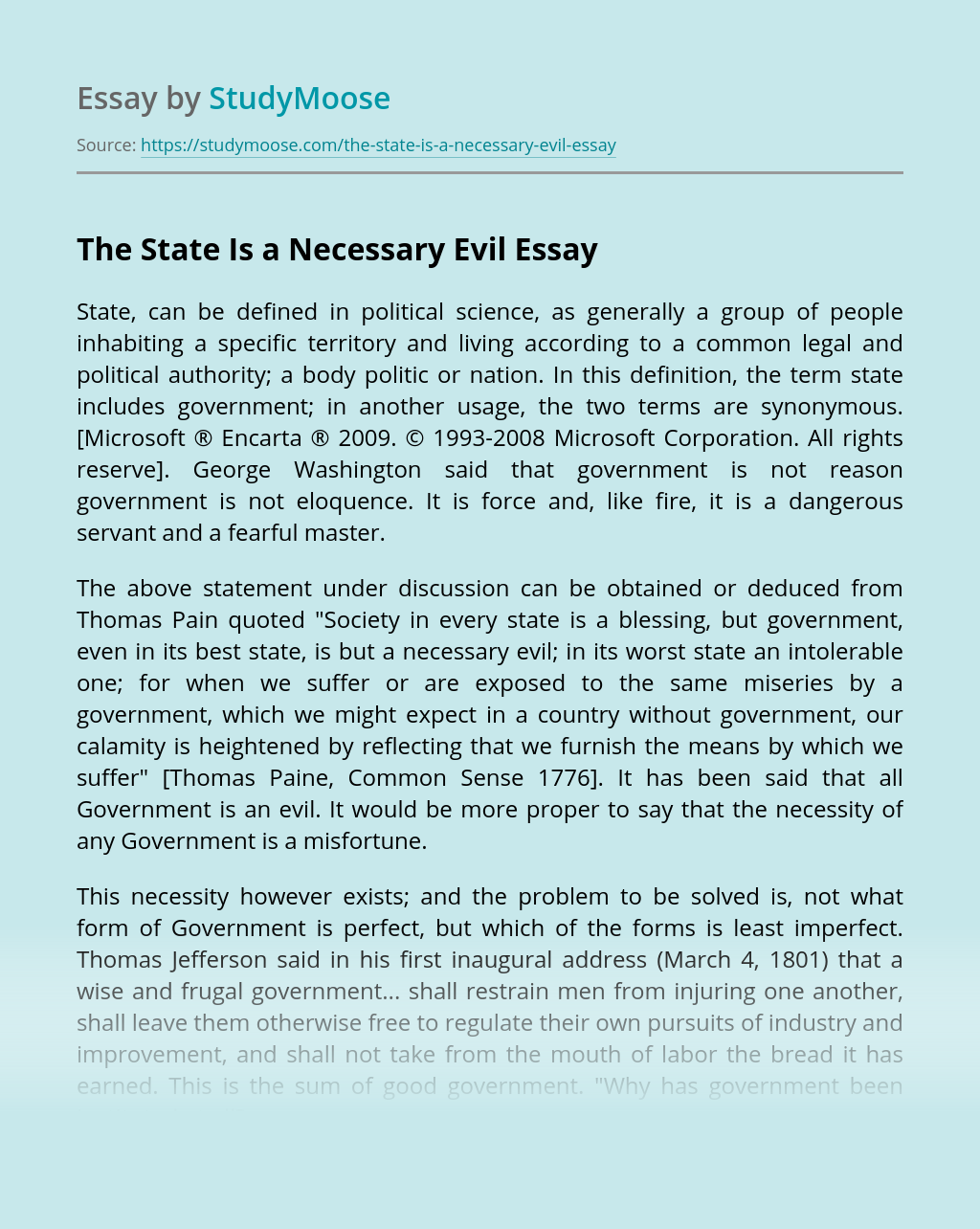