The problem is determining which plans for expansion is best for Foxy Originals.

Kluger and Orol established Foxy Originals (Foxy) in 1998, a Toronto-based jewellery firm. By designing and manufacturing high style fashion jewelry, Foxy earned a high reputation and their sales were increasing at a fast pace success in Canada. However, based on little by little saturation of Canadian markets, Foxy realized that it was time to expand U.S. market where jewelry market was 10 times bigger than Canadian one.

Get a verified writer to help you with Foxy Originals Expansion Into the U.S. Market

Since America has a huge population base, Foxy has the opportunity to obtain more customers, which in return directly lead to more sales and revenue. As a result, the highest priority was to determine which distribution plans were best for Fox. The distributions include attending trade shows, hiring sales representatives, and a combination of both. U.S. trade shows play as a medium for both seller and buyers. The main advantage of U.S. trade shows is huge buyer volume.

If Kluger and Orol attend 10 potential trade shows, they can enhance brand awareness, network with potential customers, and boost sales.

On the other hand, high cost and potential risks are the main concern for Foxy. Kluger and Orol need five days of preparation for each show in order to get the best display effect, as well as the high cost for booth layout. Kluger and Orol can hire sales forces as an alternative. Kluger and Orol don’t want Foxy to be available on every street corner in United States.

Instead, they aim at entering to key fashion centers such as New York and Los Angeles. Sales forces are just right to solve this issue. They know how to deal with local jewelry store and existing retailers, which is what Foxy just lack of. With some specific training, sales representatives could contribute to expansion U.S. market. However, finding some suitable people is not that easy. Carrying out both methods discussed above meanwhile sounds good, but a new problem emerges—territory ownership. For instance, Kluger and Orol had have to pay for commission fees on all sales, if Foxy came to a trade show, say, New York while hiring a New York based sales representatives in the same time. This is an industry norm, so Foxy has to follow.

The partners also considered about attending the trade shows in the major fashion hubs and sending their sales representatives to some smaller cities; however, if so, that doesn’t help Foxy to establish brand awareness in the United States, as these cities are not fashion-forward. Impact AnalysisImplementing distribution methods could generate some negative impacts if Foxy decides to enter into U.S market. As a result, the main impacts would affect Foxy’s design department and the logistic department. Jewelry designed by Foxy has been approved by Canadian. However, there is uncertainty about the how responsive American customers would be. If American customers prefer other style, whether Foxy needs to play up to U.S. market by changing design style, or hiring new designers? Moreover, Foxy should pay much attention to logistics, because delivering abroad is more complicated. Foxy needs to find a reliable deliver partner who could be responsible for delivering goods on time.

Timeline: which Plans are faster?

As shown in the Appendix A, each trade show costs $9,433.33 on average. In the best-case scenario, each trade show would generate $4,145.42 profit (Appendix B); however, trade show may lose money as well in the worst-case scenario, $-3,398.33. By adding total 10 potential trade shows together, Foxy would make profit from $-33,983.30 to $41,454.20, which depends on how many orders they receive at each show. Additionally, there are 10 shows during the year, which is effectively low. Preparation is complex as well. Kluger and Orol have to book tickets, arrange time, and set up booth. Also, high uncertainty cannot be overlooked. A delayed flight may waste all the previous efforts they put. Hiring them could be a smart move, although sales forces would be compensated with a 15% commission on all sales.

In comparison with trade shows, low investment and high yield is feature of hiring sales forces. Appendix A shows that hiring one sales representative for a year just cost company $6,380.00. In the low projection, each salesman may only sell 10 orders each month so that s/he just makes $19,588.00 profit ever year. Let’s assume that they luck out selling 15 orders per month, and then each salesman can make $32,572.00 annually. Moreover, hiring sales forces is much faster than previous option. By hiring them, Kluger and Orol could spend more time on running business and designing jewellery rather than struggling with difficulties they encounter in America.

At first glance, a combination of trade show and hiring sales forces seem to be a perfect alternative, but that’s not true. The annually fixed costs for this combination is $110,253.30 (Appendix B), which is almost 7 times larger than hiring sale forces. These fixed costs are not dependent on the level of goods produced by the business. If sales performance is dissatisfactory, Foxy will take a bath. Plus, Foxy would have to compensate salesmen no matter how due to spillover sales. Therefore, high cost and high risk among other alternatives are main drawback of this option, no doubt.

As consultant, I highly recommend Foxy should hire sales forces for U.S. expansion. Costs of hiring sales representatives and level of risk are the lowest among other alternatives after comparing. Besides, sales representatives’ rich experience and wide network are fortune for Foxy to enter the U.S. market. In addition, by analyzing break-even point, hiring sales forces has relatively lower B-E point, which means less complexities and low risk to carry out. Simply put, hiring sales representative has several advantages—high return, high efficiency, and low investment. Only thing needed to be taken into consideration is the process of selecting, which is actually complicated. A qualified salesman could boost sales, but an unsuitable one could try to help but causing more trouble in process.

Training Provide training to suitable sales representative; make them familiar with Foxy’s jewelry. Before 2005 Planning and Controlling Sales representatives carry out expansion plan in U.S. market. They need to provide timely feedback in order to help Foxy compare actual results with target performance. Since 2005 Foxy should hire sales forces and provide training to them by the end of 2004. As owners, Kluger and Orol should work with HR to draft the job requirement. Timely feedback is quite important once they start implementing plan, when Foxy encounters the block from local business. Furthermore, comparing actual results with target performance, Foxy can take actions to respond to these unexpected changes.

Foxy Originals Expansion Into the U.S. Market. (2016, May 23). Retrieved from https://studymoose.com/foxy-originals-expansion-into-the-u-s-market-essay

Get a verified writer to help you with Foxy Originals Expansion Into the U.S. Market 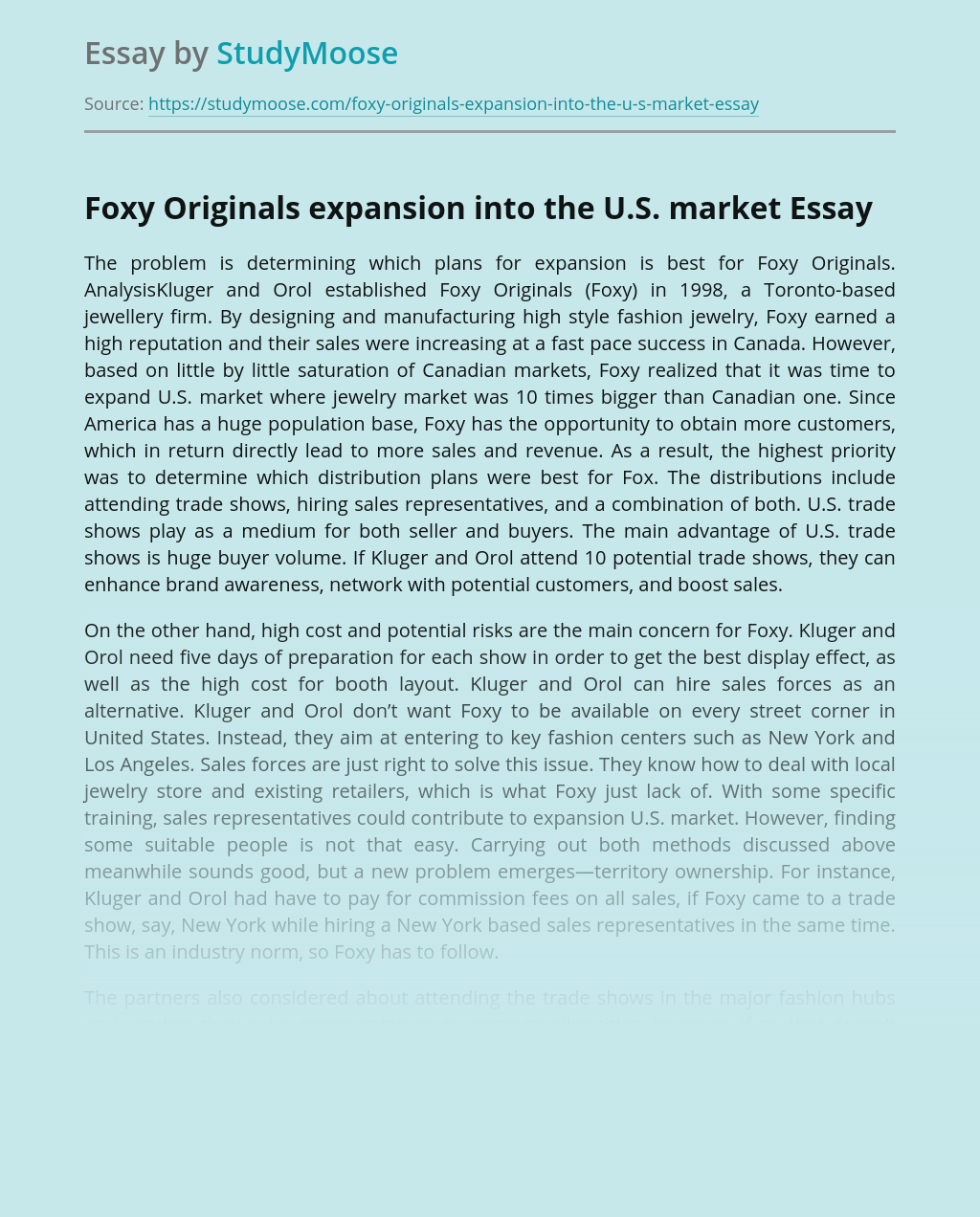 Introduction to the study In the business world. Investment is made in machinery, equipments and services. Quite naturally time and money is spent ensuring that they provide what their suppliers claim. In other words, the performance is constantly appraised against the results expected. When it comes to one of the most expensive resources companies invest...

In May 2011, Pravin Shah, the CEO at Mahindra & Mahindra, was evaluating four possible options of company’s growth strategy in the South Africa. Those options included: entering into agreement with the local vendor for the contract assembly of M&M vehicles, investing in its own manufacturing plant in South Africa, using South Africa as a...

Situation Analysis The success of Trader Joe’s is the result of a business model that pairs unique products offerings with low prices. By making luxury affordable, many well-educated, budget conscious, consumers are drawn to Trader Joe’s on a regular basis. As of 2012, the company ranked 12th in overall grocery sales (7.6 billion), however 1st...

Niche, noun: a distinct segment of a market. A niche market is built in the market and focus on a specific product. So the market niche defines the specific product features aimed at their satisfying specific needs in market, and price range, production quality, as well as the demographics that is to be impacted. (wikipedia,...

The buying and selling of goods and services across national borders is known as international trade. International trade is the backbone of our modern, commercial world, as producers in various nations try to profit from an expanded market, rather than be limited to selling within their own borders. There are many reasons that trade across...

Clarkson Lumber Company is a classic example of a privately held company that has experienced a rapid growth in sales and has reached a point where it is facing a shortage of cash to sustain the expected growth in sales in the following years. The owner, Keith Clarkson, bought out his partner’s interest in the...

Strategy, Aims & Objectives Objectives have to be created according to the SMART acronym. Specific: The business has the objective to increase its sales by November since that is when the Term 1 starts for universities. Measurable: From the start of the business (July) increase the sales by three times till November Achievable: The objective...

Current Size, Growth and Profitability Recently, Haleeb Foods has reached a turnover of Rs. 9. 2 Billion in the year 2009. It was a loss, though, as Haleeb Foods has been experiencing a slump since 2-3 years due to internal management and quality issues. Competition may pose a threat because the company will have to...