People Have Been Inspired For the Desire to Reach

For many years, people have been inspired for the desire to reach glory, such glory that will put them at the top of everything. Consequently, people will not hesitate to do whatever it takes in order to achieve the glory. The Illiad written by Homer presents the character of Achilles, he is considered the best warrior at the time. Yet, he is driven by the craving for recognition and leave an eternal mark. Certainly, this story presents the rage of Achilles and how it changes into a good mood.

Don't use plagiarized sources. Get your custom essay on
“ People Have Been Inspired For the Desire to Reach ”
Get custom paper
NEW! smart matching with writer

First, The Iliad is a poem written by Homer. It is a Greek poem in which the writer narrates a story set at the time of the Trojan War. This poem starts with the journey of Agamemnon and Achilles to Troy in order to bring Helen back to Agamemnon’s brother side, taking her away from Paris and Hector which are the princes of Troy. In this journey, there is a set of events that interfere with the goal; making Achilles one of the main characters.

Achilles is not a human being base on his actions.

In addition, Achilles is showing that he is angry for many reasons. One reason is because he likes Briseis; however, Agamemnon took Briseis as his prize too. “She the young woman, unwilling, went with them. But Achilles, weeping, quickly slipping away from his companions, sat on the shore of the gray salt sea, and looked out to depths as dark as wine” (Puchner 146). Achilles is able to recover Briseis.

Also, Achilles is angry because Hector killed his friend – Patroclus. Hector killed him by mistake thinking that it was Achilles; yet Patroclus was dressed like him. Indeed, when someone takes your women and friend then you are very angry with life.

On the other hand, Achilles changes his anger for good mood. However, it is not as it is stated, it is more of a realization that fury and destruction should leave his heart. Indeed, he is angry due to the death of Patroclus; thus he has to stop his vengeance. When Priam asked him to release Hector’s body, Achilles accepts. “If then you are willing for me to accomplish Hector’s funeral, by doing as follows, Achilles, you would give me a kindness·These things, old Priam, will be as you ask; I will suspend the war for such time, as you command”. (Puchner 191). Achilles is not the most compassionate, but the reader is able to see a change. Indeed, Achilles realized the anger he has against Hector is a worthless.

In conclusion, Achilles was a mercenary who has a transformation throughout the story.

People have been inspired for the desire to reach glory, as Achilles wants it too. Clearly, he is a character that portrays rage, fury, revenge, and other negative feelings. Throughout his life, he lost love and friendship due to the war. Yet, he is considered the best warrior at the time. This story addresses the rage of Achilles and so his positive transformation.

People Have Been Inspired For the Desire to Reach. (2019, Nov 22). Retrieved from https://studymoose.com/for-many-years-people-have-been-inspired-for-the-desire-to-reach-example-essay 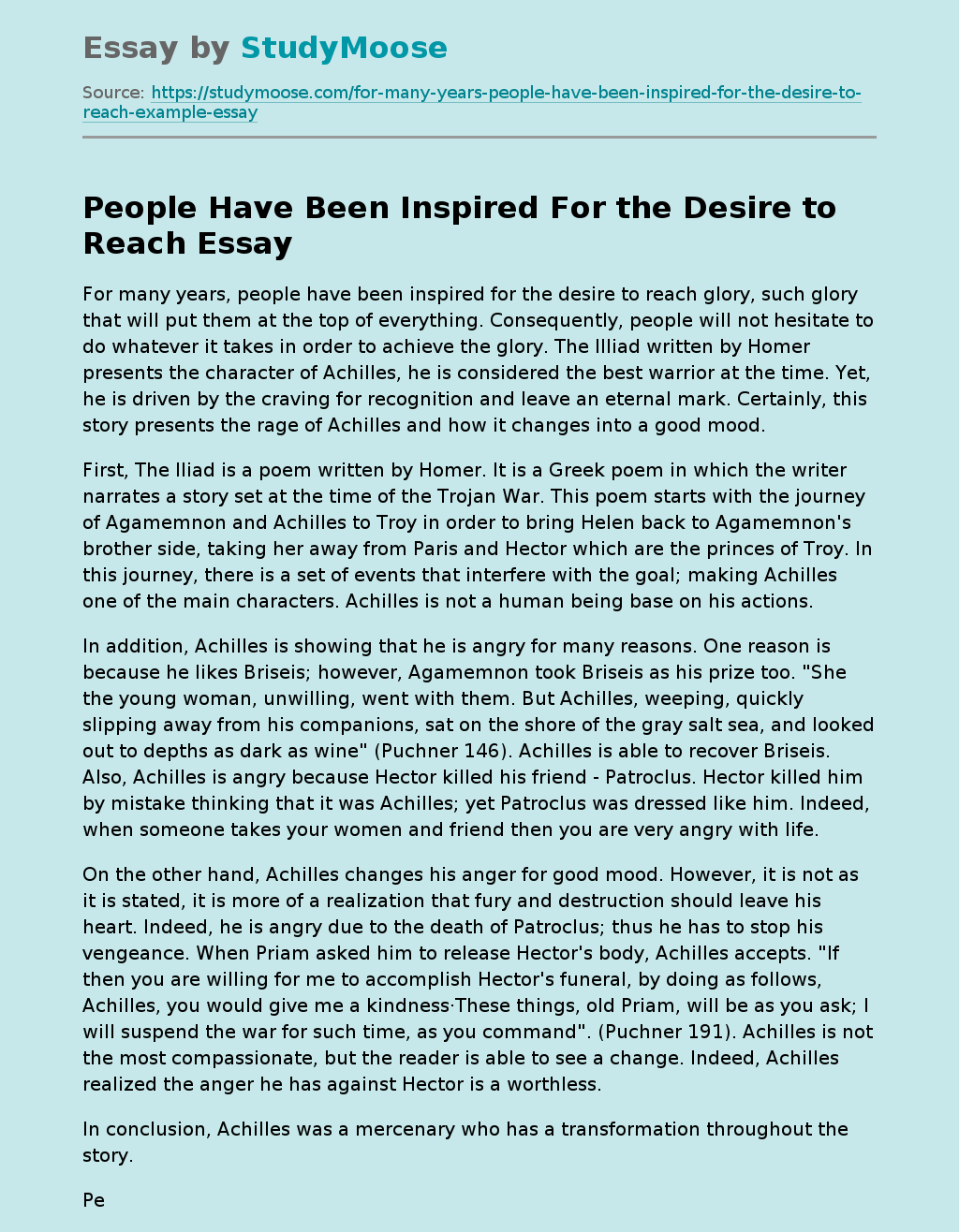