Folk Dance History in the Philippines

It is impossible to know when exactly dancing became a part of life in the Philippines. Many traditional dances were designed to thank the gods for natural and agricultural events, such as rain and harvests. The dances were performed during festivals and remembrances of past military victories, and still are performed at celebrations of births and weddings in modern times. Many modern folk dance festivals still feature ancient dances performed in costume of the tribal period of the Philippines. Some dances such as the Palok and the Lumagen are performed with traditional percussion instruments such as the gangsa (a small copper gong), a tobtob (brass gong) or a hibat (a gong played with a soft wooden stick).

Don't use plagiarized sources. Get your custom essay on
“ Folk Dance History in the Philippines ”
Get custom paper
NEW! smart matching with writer

For many tribal dances there are no external musicians; the dancers generate their own accompaniment with stomping and hand clapping. Later Dances in Philippine History

More recent dances done in the Philippines derive from historical events such as the arrival of the Spaniards in the 16th century and the conflicts with the Moors.

While certain words and movements from those cultures have been integrated into the dances, the Filipino dance genre remains true to its ancient tradition and roots.

Subli is the dance portion of a devotion performed in honor of the Mahal na Poong Santa Cruz, a large crucifix of anubing wood with the face of the sun in silver at the center. The icon was discovered in the early decades of Spanish rule in what is now the town of Alitagtag, Batangas. It is the patron of many towns in the area, notably the ancient town of Bauan, Batangas. The subli consists of a long sequence of prayers in verse, songs, and dances, performed in a fixed sequence. The verse recounts the first journey of the early manunubli ( subli performer)through the fields, hills, and rivers of Batangas in search of the miraculous cross. Sections of verse are sung to a fixed punto or skeletal melody, which may be elaborated on in a different way by a different subli troupe. About five of these punto are used in a complete subli performance. These sections may be divided further into various fixed dance patterns involving one, two or eight pairs of men and women.

These numbers seem to be the norm in Bauan, although other towns may have formations involving three pairs at a time. The stances, gestures, and movements of the male dancers are freewheeling and dramatic, consisting of leaping, striking the ground with kalaste (wooden bamboo clappers held in both hands), and other movements suggesting the martial arts. The women circle on half-toe, performing the talik (small refined gestures with wrists and fingers), their fingers grazing the small-brimmed hats and alampay (triangular scarf worn loosely over the shoulder)that are the essential parts of their costume. They dance and sing, to the rhythm beaten out by a stick on the tugtugan, a goblet-shaped, footed drum of langka wood with a head made of iguana skin. -E.R. Mirano

Folk Dance History in the Philippines. (2017, May 10). Retrieved from https://studymoose.com/folk-dance-history-in-the-philippines-essay 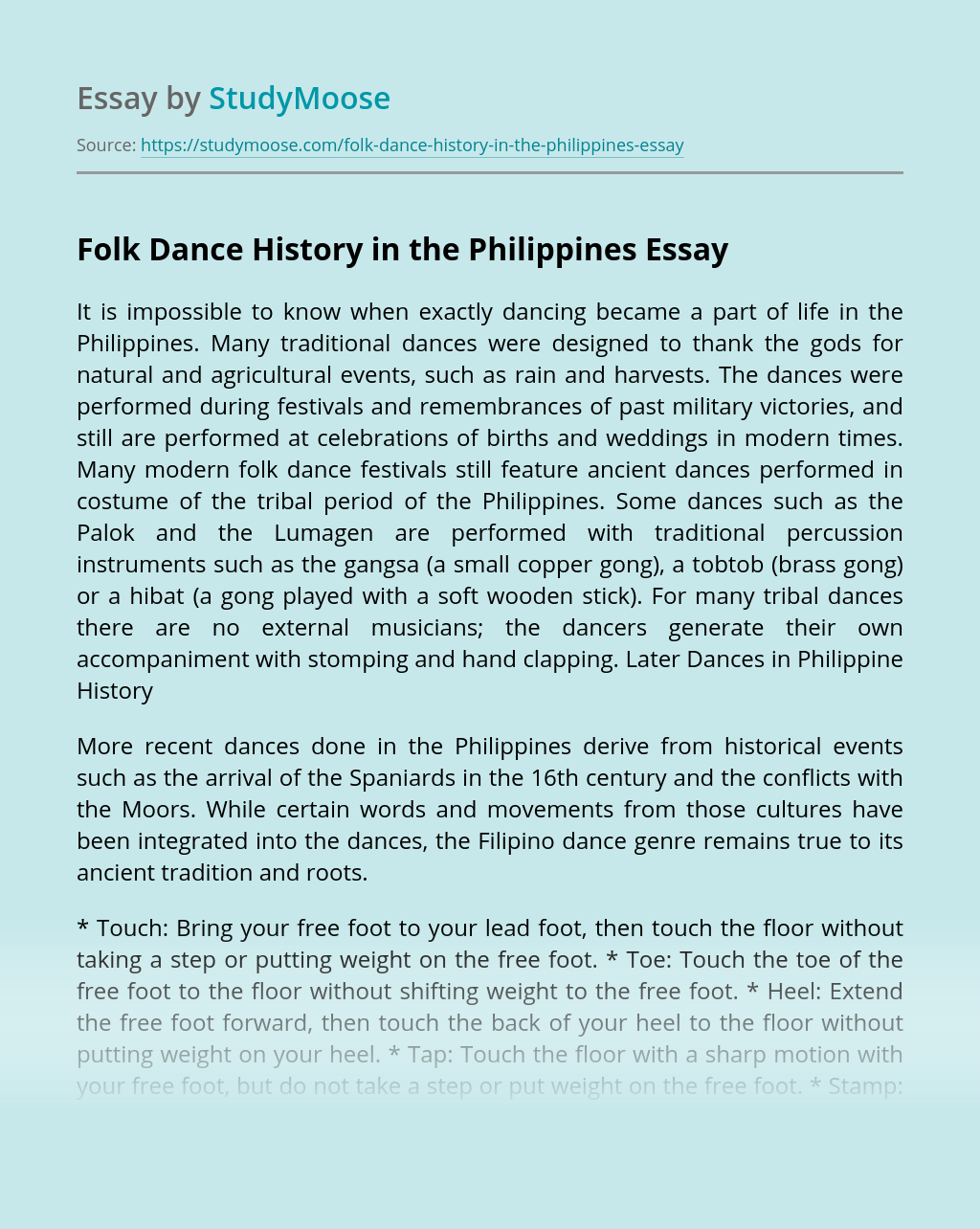