Have you ever felt scared when you are put in a foreign situation for the first time? You probably felt it was scary at first but afterwards you might have found it very amazing. Experience is what everybody may have to go through eventually. I was always afraid of experiencing new things because of fear in me. As I got older, however, I realized that going through these experiences could be very beneficial and a lot of fun. Something I did not know at the time, however ,going through this ride would end up being beneficial to me and also over come my fear.

Don't use plagiarized sources.
Get Your Custom Essay on First Flight Experience Just from $13,9/Page

Then I suddenly realized that “this is it”.

I was about to get on a plane for the very first time. As excited as I was, I was not mentally prepared for everything that was about to happen. I walked in the Vancouver Airport for the very first time, my tiny hands were holding mom’s hand, while dad was pushing the trolley that had our luggage on it. I stand there at the side watching my parents placed the bags on the scale. I watched the numbers on the scale rises. “That suitcase is overweight sir,” said the man behind the counter “I suggest you remove some of the items and place them in another lighter suitcase,” he continued. As my dad did what he said, my mother checks me in.

I made my way through all the vigorous airport security procedures, and down towards the terminal. While waiting for the plane, my heart started pounding quickly and loudly, and I felt as if there were butterflies in my stomach. When it was time to board, I dragged my backpack along the carpet floor and into the corridor. As I walked into the long hallway, I glanced up and noticed the sign telling me I could get on. I said to myself, “I’ll soon be in the air for the first time”. I watched as swarms of people walk pass me and the excitement and nervous started building up inside me.

I hurried my pace to what was almost a jog, until I had caught up with my parents. I came to a bend in the tunnel where the flight attendants came to help people find their seats. Just before I entered the airplane; I looked down at the gap between the corridor and the airplane. The metal around the entry door was rusted and worn, which gave me an eerie feeling. Reluctantly, I stepped aboard feeling a bit uneasy; questioning whether it would be a safe flight or not.

The flight attendant directed us towards the back. I had to duck around people because I was very little back then; people were putting their luggage into the upper compartments. As I walked past one of the windows, I glanced out and saw the right wing. It somehow gave me reassurance that I’d be fine. As soon as we were seated, I heard a voice announcing and requesting all passengers to fasten their belts. I looked for my belt, wondering why we were being asked to do so. Just then, there was another announcement that the plane was about to take off. At this moment, I felt a peculiar pang in my chest as if my heart was hitting its walls, and I held on to Mummy’s arm who was sitting next to me. I grew impatient and was extremely nervous, as my fear of heights dawned on me.

The plane started taxiing; I thought that it would take an hour just to get to the runway. Then, just as I looked out the window, a sudden gush of acceleration overtook everything. My body was elevated up as if some mysterious power was effortlessly lifting. My hands clenched the armrests tightly, and my eyes widened. Excitedly, I thought about how I was about to experience my first flight experience. The plane takes off and we soared up into the sky. Only after a few seconds I think I was alright and felt normal and now, I looked on to the ground we had just left. As we rose above the ground, I could see the roads, vehicles on the roads, plain land, and houses.

Soon I was so engrossed in enjoying the aerial view that I forgot all fear and nervousness. I felt pain in my ears, and I thought something. I tried to adjust it; my mom reassured me saying that it would be fine after we landed. I tried everything attempted to “pop” my ears but the pain didn’t reduce. In no time we reached our destination. It was a very pleasant and new experience for me. Can I ever forget this experience? No, never. It has left an indelible impression on my mind. This first air ride was a memorable one, and a real experience.

The next trip will be, whenever it may be, surely more enjoyable. In the process, I learned that having the anxiety can be helpful if you know how to wield the feelings. I feel satisfied, I feel accomplished, and I feel proud overcoming a fear. Even though I was a little kid back then not knowing what was going on, it was ultimately the best feeling I have ever experienced. I will never forget my first time “in the sky”. 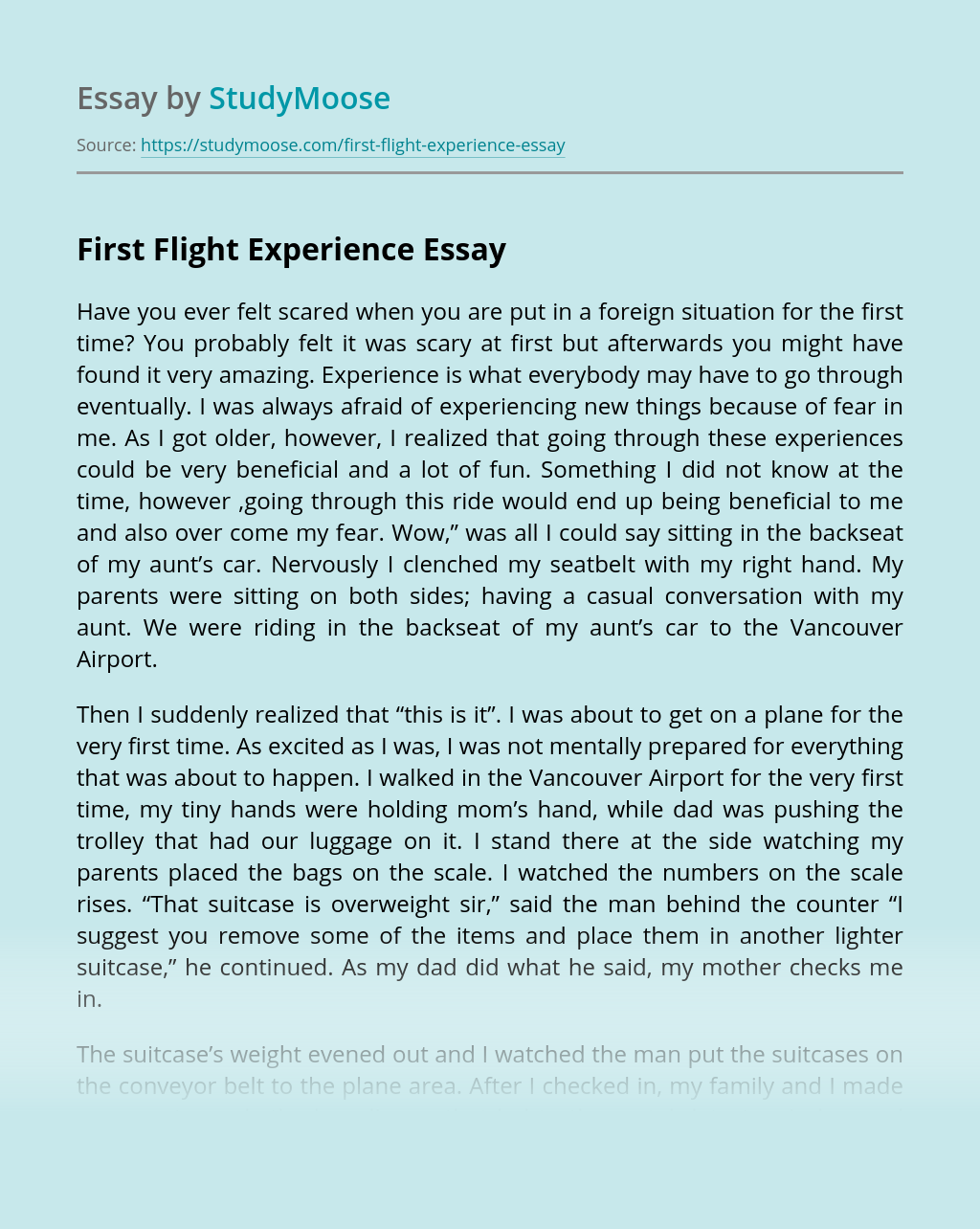 Have you ever felt scared when you are put in a foreign situation for the first time? You probably felt it was scary at first but afterwards you might have found it very amazing. Experience is what everybody may have to go through eventually. I was always afraid of experiencing new things because of fear...

View sample
The oldest and strongest emotion of mankind is fear

“The oldest and strongest emotion of mankind is fear.” I bet no person will disagree to this statement. We all have fears. Some would admit it, most prefer hiding it. The fears we have inside serve as our weakness in our times of strong points. Facing and conquering these fears is the ultimate key to...

In English class, everybody discharges loud groans when they find out about their next units: Shakespeare. With the class complaining about the tough language and the trouble of understanding the plays, the instructor may grow exasperated and let them read the infamously discussed book No Fear Shakespeare. The teachers are doing question thing when they...

George Orwell’s essay “Shooting an Elephant,” introduces an intriguing insight on imperialism, ethical disputes and fear of judgement through the inner functions of a European law enforcement officer provided the intense task of handling an elephant in musk within Moulmein, in lower Burma. Imperialism, as defined in the Oxford English Dictionary, reads that Imperialism is...

View sample
Lamb to the Slaughter - Study of Mary Maloney

I am going to explain within this essay how I think Mary Maloney’s character changes in the story Lamb to the Slaughter by Roald Dahl. When the story opens Mary is a content, loving and devoted wife and is six months pregnant and happy to be so. “Now and again she would g lance up...