Film Analysis: the Boy in the Striped Pyjamas

In the movie, The Boy in the Striped Pyjamas, the holocaust which happened in history was clearly depicted. It was shown in the film how the Jews were poorly treated by the Nazis at that time. Hence, here are some instances in the film where prejudice, bias, discrimination and ethnocentrism were depicted. First is prejudice—Merriam-Webster describes prejudice as an injury or damage resulting from some judgment or action of another in disregard of one’s rights.

Prejudice was most evident in the ending scene where the Jews from the concentration camp were put inside a large gas chamber, and they were made to believe that they were just going to take a bath, but the truth is they are to face their death.

Don't use plagiarized sources. Get your custom essay on
“ Film Analysis: the Boy in the Striped Pyjamas ”
Get custom paper
NEW! smart matching with writer

Also, the fact that they were confined inside a concentration camp was already a huge example of prejudice since this has taken away their freedom. Bias, on the other hand, is a personal and unreasoned judgment. This was shown in the part where Schmuel was in the house of Bruno doing some work.

He was given food by Bruno, but they were caught by a Nazi soldier. Schmuel was trying to defend himself by telling the truth, but the Nazi soldier still believed Bruno’s lies just because Schmuel was a Jew. Next is discrimination which is having a prejudiced or prejudicial outlook, action or treatment towards others. In the film, when Bruno and his family transferred to Auschwitz, there was an old Jew who were like their house help.

He received discrimination since he was treated as if he had a contagious disease—the children were not allowed to interact with him.

Also, Bruno’s dad constantly reminded him that he cannot go out of the confines of their home, especially to the “farm” Bruno saw from his window. This restriction was discriminating because it showed how the Nazis shied away from the Jews. Lastly, ethnocentrism is characterized by or based on the attitude that one’s own group is superior. Hence, it can be deduced that the film centered on ethnocentrism which existed at that time when the German Nazis believed that they are superior to the Jews, thus giving them the right to put the Jews to near extinction. This ethnocentrism gave rise to the holocaust which was the main story of the film.

Film Analysis: the Boy in the Striped Pyjamas. (2016, Dec 15). Retrieved from http://studymoose.com/film-analysis-the-boy-in-the-striped-pyjamas-essay 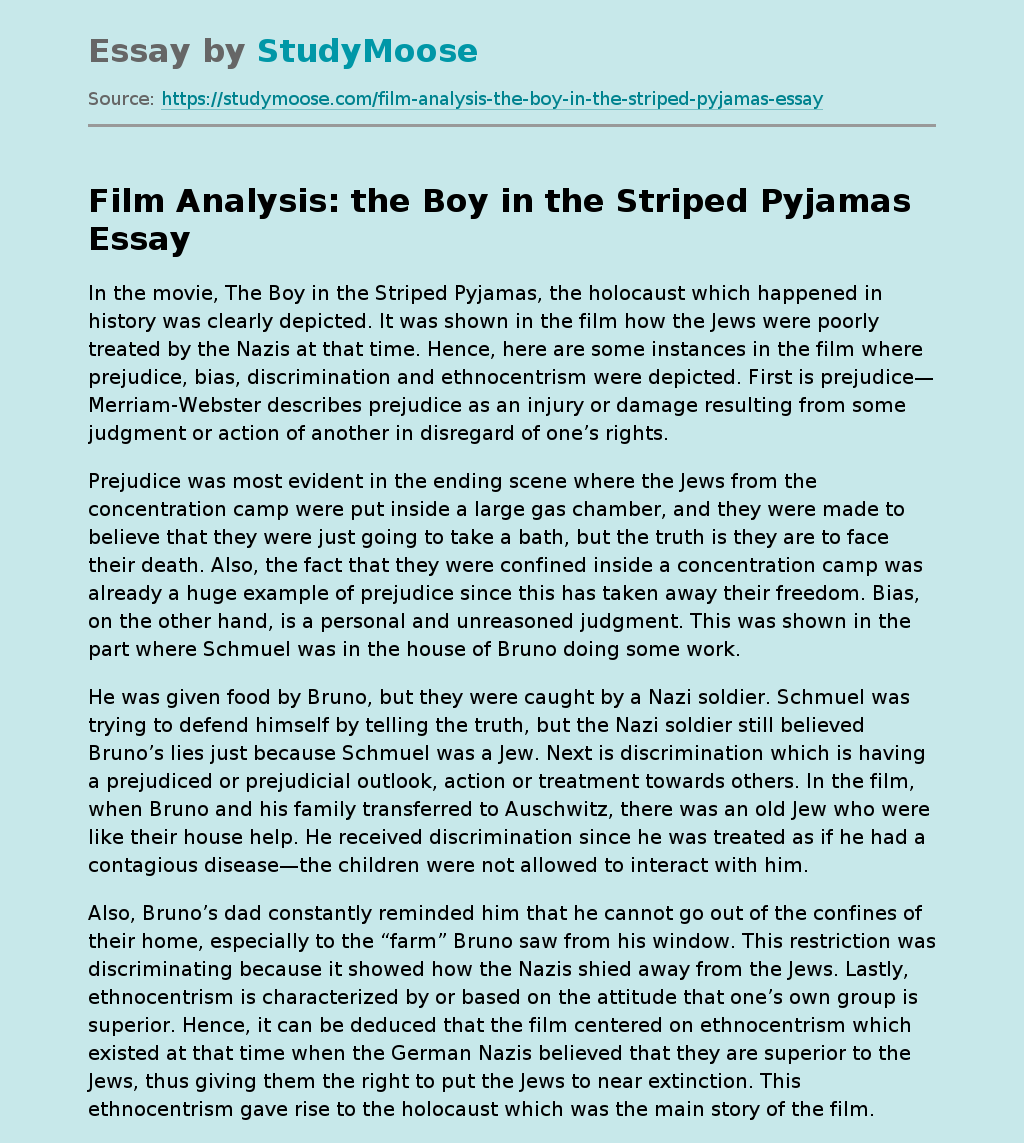