The Boy in the Striped Pajamas, written by John Boyle is a fictional novel of the unlikeiest of friendships, the son of a Nazi commandant and a Jew suffering in the largest concentration camp.

An Important Theme of the Novel

I believe innocence that is created by a sheltered and caring family is an important theme of the novel. Bruno was unaware that his father was a Nazi commander or that he is living right next door to Auschwitz concentration camp.

Don't use plagiarized sources. Get your custom essay on
“ Boy in the Striped Pyjamas Movie Review ”
Get custom paper
NEW! smart matching with writer

His parents were trying to protect him from hearing the truth or understanding the reality of what was happening outside his window.

Bruno’s innocence and vulnerability caused him to misunderstand the situation around him. He hears “Auschwitz” as “Out-with” and also incorrectly hears “the Fuhrer” as “the Fury. ” Athough he was best friends with Shmuel, he was completely oblivious to the situation Shmuel was in. “No one’s ever given me an arm band,’ said Bruno. ‘But I never asked to wear one,’ said Shmuel.

‘All the same,’ said Bruno, ‘I think I’d quite like one. I don’t know which one I’d prefer though, your one or Father’s. ” This shows that the innocence of a protected childhood results in a misunderstood reality.

When looking back at my childhood, I can see how my parents protected me from some harsh realities that other children face. I had no idea what a broken family was since I had a stable and caring family. I would hear stories on the news of child abuse and violence but never really understood how that would feel.

It was not until I was older and I realised issues like this are actually out there and it is the enviroment many children grow up in. I believe another important theme in The Boy in the Striped Pajamas, is bullying. Throughout the novel the Nazis demonstrated their hatred for the Jews.

Hatred and Cruelty to Jews

The Nazis believed they were much more important than the Jews and they deserved to die. Lieutenant Kurt Kotler was one example of a bully in the novel. He abused and hated the family’s Jewish servant, Pavel. “Pavel held his cap before him in his hands and nodded, which made his head bow even lower than it already was. ‘Yes, sir,’ he said in a quiet voice, so quiet that he may not even have said it at all. ‘And afterwards, when you return to the kitchen, make sure you wash your hands before touching any of the food, you filthy-‘ Lieutenant Kotler repeated the word he had used twice already and he spat a little as he spoke.

This was how he spoke to Pavel. Lieutenant Kurt’s rank put him in a position of power over the Jews. I see a similarity of this in high school. Some older students believe they are much more important than the younger students just because they have been there longer. Some act like they are better than everyone else. Younger people then go through the younger high school years feeling terrible and miserable about themselves.

Acceptance in our society is an awful problem; people don’t approve of others who are different. By accepting this movie and what it is trying to teach us we can better our society. If everyone is friendly towards each other and realize we are all similar we can meet people who can help improve ourselves.

The movie plot was very interesting but even more the cinematography and acting made the movie the success it is today. Each actor played their role very well. The interesting thing is the contrast the director used for every individual. Each scene was conscientiously constructed exposing the feelings of the individual characters. 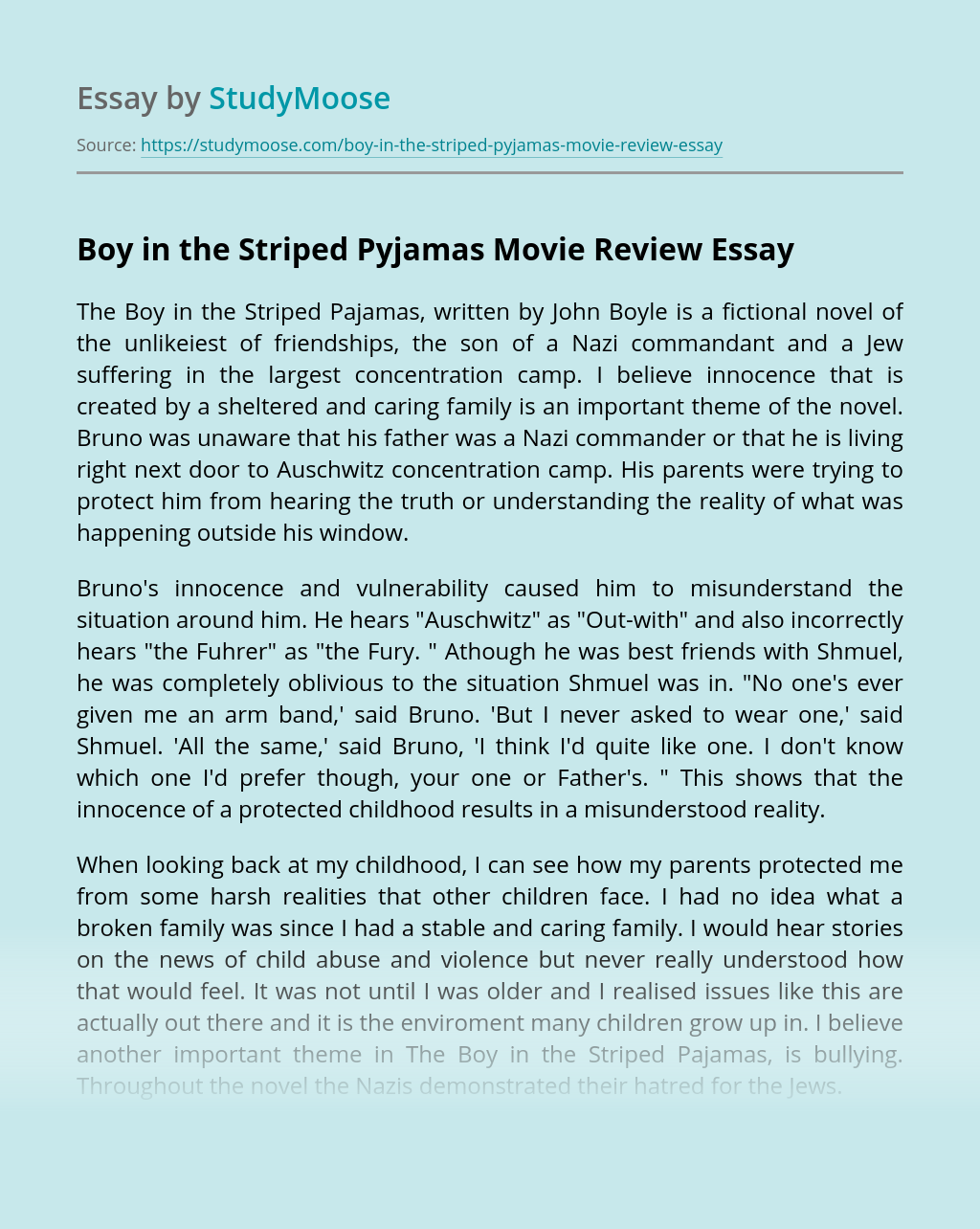