The Boy In The Striped Pyjamas is a story that was based around the time of the Holocaust. Throughout the novel, a series of events leads to a German boy making an unlikely friendship with a Hewish boy. Firstly, the ability of Bruno and Shmuel to support each other’s needs plays a significant role in the initial development of their friendship. Additionally, the realisation of their shared similarities helps to further strengthen their friendship.

Finally, their ability to accept one another despite the ongoing conflict between people of their worlds, ultimately cements their friendship for life.

Don't use plagiarized sources. Get your custom essay on
“ The Boy in the Striped Pyjamas ”
Get custom paper
NEW! smart matching with writer

Bruno and Shmuels’ friendship began developing during their first encounter when they both found they could provide something the other needed. This is firstly shown when Shmuel asks Bruno whether he had any food on him.

“You don’t have any food on you, do you?” (page 131). Bruno needed friendship which became obvious with his continual asking of questions, and finally his complaint that “he was stuck over here on this side of the fence where there’s no one to talk to and no one to play with”, suggesting that his move to Poland has left him lonely.

Another example of supporting one another’s needs is when Bruno enters the camp and disguises himself in the pyjamas so as to help Shmuel find his father who has gone missing on one of the marches. “quote”.

As their friendship deepens, both Bruno and Shmuel realise that they have a lot more in common despite their obvious differences.

As Bruno’s and Shmuels encounters continued, they learned more about each other and discovered that their similarities brought them closer. During their first encounter, the first similarity becomes apparent with both boys realising that they share the same birth date. “… my birthday is April the fifteenth too… we were born on the same day.” (page 109). Bruno and Shmuel’s amusement with each other’s names is another thing they shared in common.

“I like the way it sounds when I say it…it sounds like the wind blowing…I think I like your name too…it sounds like someone rubbing their arms to keep warm” (page 109). Another example would be for instance how both Bruno and Shmuel were both proud of their fathers. “ Ultimately, Bruno and Shmuel’s acceptance of each other despite their significant differences played a role not only in the development of their friendship but also the strengthening of it.

During one of their encounters, Bruno highlights societies’ views on friendship and interactions between their two worlds; “We’re not supposed to be friends, you and me. We’re meant to be enemies.

Did you know that?” (page..). Ultimately Bruno fights against the discrimination that surrounds him as he continues to talk to Shmuel, providing him with food and acting as a friend. “insert quote”. In their last moments together in the gas chamber, their acceptance of each other and their worlds cannot be more obvious as Bruno tells Schmuel,” You’re my best friend, Schmuel. My best friend for life” (page 213).

In conclusion, the novel ‘The boy in the Striped Pyjamas’ showed how a friendship can develop between a Jewish and a boy of a Nazi commandant. The friendship between Shmuel and Bruno initially began developing due to one another’s needs for food and friendship.

As they began spending more time together, their friendship begins to strengthen as they realise they have many things in common with each other. In the end, their acceptance of each other and their respective worlds is what cemented their friendship as they were able to look past all of the prejudice and just appreciate each other.

The Boy in the Striped Pyjamas. (2016, Apr 12). Retrieved from https://studymoose.com/the-boy-in-the-striped-pyjamas-essay 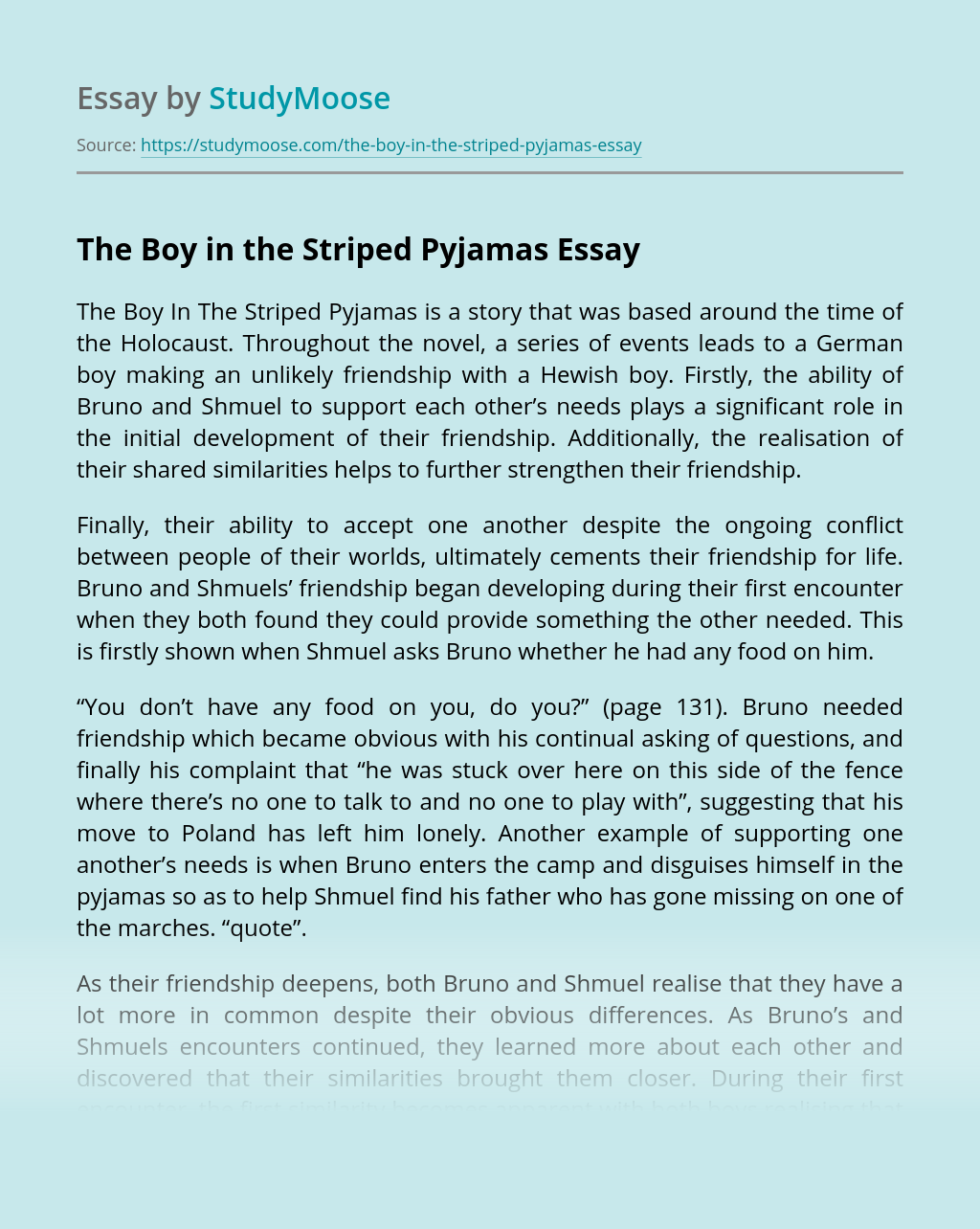