Boy in the Striped Pyjamas

“The point of using an unreliable narrator is indeed to reveal an interesting gap between appearance and reality, and to show how human beings distort or conceal the latter. ” David Lodge, in the 1993 collection of short stories “The Art of Fiction: Illustrated From Classic and Modern Texts”. The use of 3rd person limited subjective naive narrator amplifies the themes of this ironic novel; innocence and ignorance, war and prejudice . Many literary techniques are used in this book highlight the themes. Third person limited subjective naive narrator is one of many narrative voices.

Don't use plagiarized sources. Get your custom essay on
“ Boy in the Striped Pyjamas ”
Get custom paper
NEW! smart matching with writer

Third person point of view is where a third party narrates the book, e. g. Pride and Prejudice. Limited, or iIntimate voice is where the story is told from a single point of view. In the Boy in the Striped Pyjamas, this point of view is that of Bruno’s. Subjective means opinionated, judged or assumed. This is describing the way the narrator speaks, as opposed to being objective, which is factual and measured.

Naive means showing a lack of experience or wisdom, in other words ignorance. The innocence and obliviousness and ignorance of childhood are a major theme explored in this novel.

This is amplified by the subjective limited naive narrator, as it is told from the point of view of a child growing up in a war-ridden world. The malapropisms and mistakes Bruno make makes the situation even more ironic and gives an insight in how innocence and ignorance change the world completely. The irony of the situation, a child whose father runs a German Death camp in world war two, creates emphasis on the ignorance of a child.

The naive narrator tells us that he is at “Out-With” (Boyne, J. 2006: 16) and the “Fury” (Boyne, J. 006:6) came to dinner the other night. It shows a different, unaffected perspective. Bruno doesn’t have a side in the war as he is young, innocent and ignorant. War is highlighted as a major theme in the novel through the setting, timeframe and the 3rd person limited subjective naive narrator. The limited subjective narrator amplifies the theme of war and loss by being biased on the Nazi side of the war. The narrative voice comes from Bruno’s opinions and again it shows a completely different perspective, Bruno both being a child and German.

Bruno’s childish voice and his misunderstanding of things going on in the war causes curiosity in what “Out-With” and the “Fury” is. If written in an adult’s voice, it wouldn’t be so interesting and the theme of war would not stand out. Prejudice is a theme in this novel, which is amplified by the naive, unreliable narrator. The fence that separates the Auschwitz death camp and the Commandant’s home is symbolic to this as well. The naive narrator highlights prejudice because Bruno’s does not understand the idea.

The prejudice confuses him and also makes us feel empathy for him. When we see Shmuel on the other side of the fence, the author shows that both boys are similar to each other, and that prejudice that the adults of the time had was naive and unfair. In conclusion, the narrative voice of 3rd person limited subjective naive narrator is used to amplify the 3 key themes in the novel; innocence or ignorance of childhood, war and prejudice. It all leads back to the importance of the narrative voice and the way it is used. It provides us with a different view of the world and war.

Boy in the Striped Pyjamas. (2016, Oct 19). Retrieved from http://studymoose.com/boy-in-the-striped-pyjamas-essay 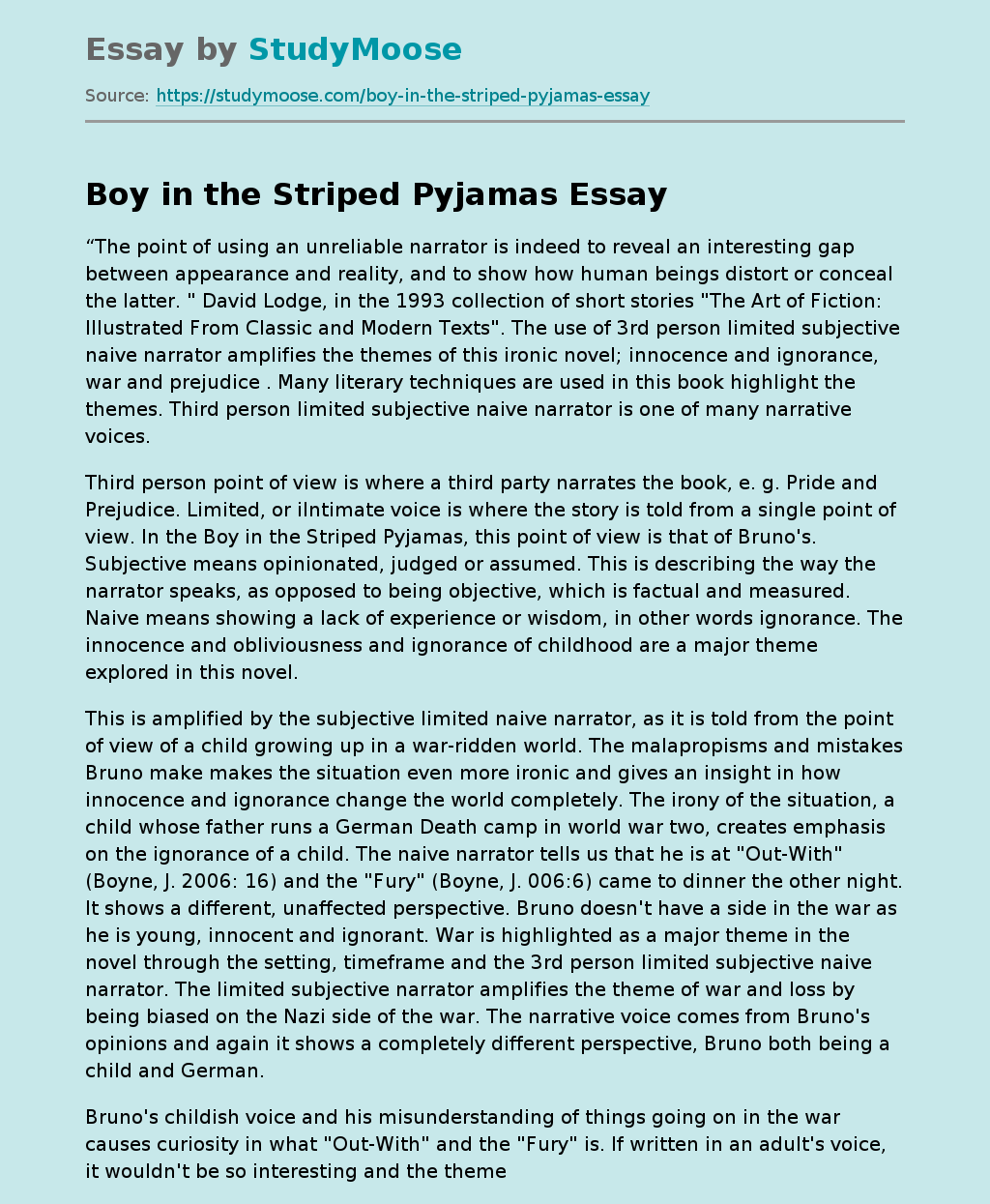